You can sample the city’s bustling art scene, old town charms and the most tantalizing chocolate, all in one day

Zürich, unlike what many initially thought, is not the capital of Switzerland. The quaint old city is the largest in the country, despite having only less than 500,000 urban dwellers. What it lacks in the growing population, Zurich certainly makes up for with a promise of quality life. Spend just five minutes strolling around the
city and you’d simply understand why this poetic town deserves a place in everybody’s heart. 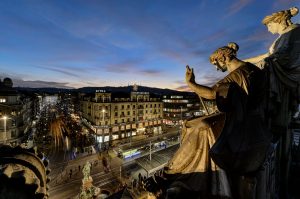 From the airport (Flughafen Zürich), take a train to the central station (Zürich HB or Hauptbahnhof). The big station itself often holds interesting art exhibitions and architectural details that really bring up that European feel on your holiday. Even better, the station is right before Bahnhofstrasse, the city’s
main thoroughfare.

Places of Interests
Swiss National Museum (Schweizerisches Nationalmuseum)
Tucked behind the central station, the national museum resembles a huge mansion that actually reserves a lot of historic antiques. If you have a soft spot
for homewares and handicrafts, there’s no better place to see than this one.

Confiserie Sprüngli
Among all the shops teeming along Bahnhofstrasse, the Sprüngli shop at the building no. 67 is Zürich’s oldest. Founded in 1836, Sprüngly has contributed to the country’s reputation as a fine chocolatier. The building also houses the brand’s global headquarters. Uhrenmuseum Beyer Zürich Another thing Switzerland is famous for is wristwatches. A stone’s throw away from the Sprüngli shop is a watch museum on the basement of a quaint watch store. Go inside and you’ll feel
transported back to the time when clocks were a thing of wonder. 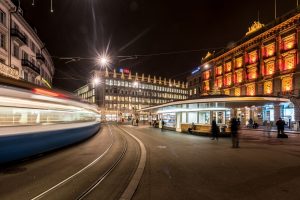 Paradeplatz
Walk along Bahnhofstrasse and you’ll stumble upon a junction called Paradeplatz. City trams swish by on the sides, and at night the city lights beam a bit dramatically, especially with a Ferries Wheel appearing on the background. It’s very Instagram-able!

Kunsthaus
Once you find yourself at the pier at the end of Bahnhofstrasse, turn left, cross the bridge and walk straight ahead until you come across Kunsthaus, the city’s art
museum. Not only does it boast major European artworks from 15th century to the present, the building is also next to Schauspielhaus Zürich, a prominent
German-speaking theater in the world. Kill two birds with one stone, aha!

St. Peter
Go back to the bridge but don’t cross it. Instead, stroll to the right, along the romantic lake where swans are often spotted paddling in twos. You’ll soon see
another bridge with, in the background, a gothic church whose clock tower remains an icon. St. Peter is a destination for those who desire to discover how important religion played a part in Zürich’s past. 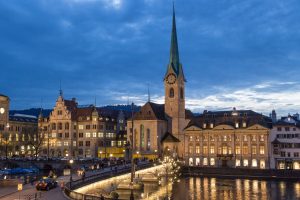 Haus zum Rüden
Continue the stroll or go back from St. Peter to your previous path, and not far from there you’ll spot Haus zum Rüden, one of Zürich’s historic restaurants. Swiss
cuisine may not be an acquired taste, but given the charming interiors and exteriors, you’ll savor the meals like there’s no tomorrow (especially since every meal is
very, very pricy!). And nothing concludes a great day in Zürich like a hot cheese fondue and Swiss rösti (potato fritter). Afterwards, you can resume your walk up to the central station and kiss this Swiss old town goodbye before heading back to the airport.

NOTES
1. Swap English with German if you’d like to converse with the locals.
2. Everything in Zürich is rather pricy. So, be ready to spend more.
3. The city view in the evening is splendid. Don’t miss it.
4. The trains are super-punctual. Don’t be late.
5. Service charge is included in the bill. But tipping is encouraged.