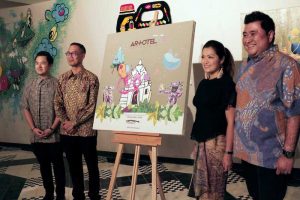 Yogyakarta is home to ARTOTEL Group’s newest Artotel Hotel. Located at Jalan Kaliurang Km.5.6 No.14, Caturtunggal, Sleman, ARTOTEL Yogyakarta boasts modern architecture with touches of local culture—a characteristic shared by all ARTOTEL hotels. This amalgamation of modernity and local wisdom gives the hotel unique persona, true to the ARTOTEL’s vision of providing hospitality services in its art-inspired designer hotels. From the brass slider to substitute stairs from the 2nd floor to the 1st floor, to the concept design which adopts one of the local handicrafts, namely weaving, ARTOTEL Yogyakarta puts to the fore its penchant for artistic presentation and respect for the cultures. The hotel’s concept design, Weaving in Harmony, is evident from the look of the building’s façade which is covered with synthetic weaving, as well as its public space interior and room interior.

ARTOTEL Yogyakarta also stays true to the Group’s mission of supporting local artistic talents. This time, ARTOTEL works with six local contemporary artists to adorn the hotel with artistic elements inside the rooms and facilities. The selection of the artists and the artworks was done by ARTOTEL Project Series (APS) team, an art division of ARTOTEL Group, and curated by Heri Pemad, a well-known curator from Yogyakarta and founder of ART JOG, a prestigious annual exhibition in Yogyakarta. One of the artists is Fatoni Makturodi, whose monochrome artwork in ARTOTEL Yogyakarta are inspired by the legend of Roro Djonggrang and can be seen on the 9th floor.

Next is Yogyakarta’s senior artist, Soni Irawan. His arts are a mix of street style, painting, graffiti and quotes. They are displayed on the 8th floor. The arts are a collage of paintings with Javanese script, and adopt the legend of Aji Saka, the inventor of Javanese alphabets and cultures. Apri Kusbiantoro is another senior artist who’s worked in America and Europe. His arts 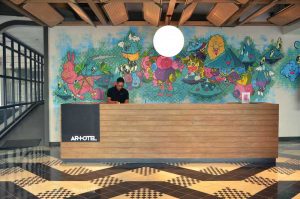 are displayed on the 7th floor of ARTOTEL Yogyakarta. With his distinctive comic style, he features the Punakawan theme, from a popular Javanese  folklore. Uji Hahan has his works displayed in the lobby level and on the 6th floor. He combines pop and urban characters using bold strikes and vivid colors to present the legend of Mount Tidar.

The next artist is Ronald Apriyan, who is known for his expressive style to reimagine the motifs of flora and fauna combined with the local folklore. His arts grace the 5th floor of ARTOTEL Yogyakarta. The last one is the collaborative works by between Rara and Putud of Tempa Studio. They utilize graphic designs into their arts and their arts are presented on the 3rd floor and in ROCA, as well as on the employee’s uniform. Tempa’s artwork for ARTOTEL Yogyakarta is inspired by the myth of Dewi Sri, the goddess of fertility. 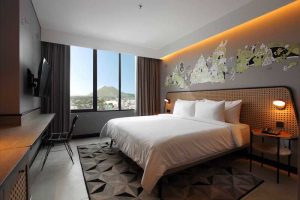 The 105 bedrooms available in the hotel come in several area sizes: 23 sqm,25 sqm, and 41 sqm, each with the now-standard 43-in LCD TV, safe deposit box, Dolce Gusto coffee maker, minibar, and Wi-Fi connection. The hotel rooms offer a splendid view of Mount Merapi or Yogyakarta city view. ARTOTEL Yogyakarta has four meeting rooms (MEETSPACE) which can accommodate up to 120 people, a swimming pool, and ROCA Restaurant & Bar, which serves Indonesian and Western cuisine, while another one, BART Rooftop Bar, is set to open in 2018.