Writing is this mesmeric process, which once you sink your teeth into, will grab hold of you fast, not wanting to let go until you are spent. It’s also an anathema many shy away from: How many high school or college students joyfully get immersed in the process of writing their paper, and not constantly glancing at the bottom of their screen to see if they’ve clocked in enough words to meet the requirement set by their teacher or lecturer? Highly probably not many. Nevertheless, the world is filled to the brim with writers.

Many want to earn the title a writer, or an author, seeing their name in print (On the cover of real printed books printed on real paper and available at posh bookstores is still most preferred in this age of paperless society). Hence, they write books and become writers. Many others aim at seeing their name printed every other day of the week under different glaring title and headlines. So, they write articles and become journalists. Both write, but how do they differ?

Creative writing and journalism are not one and the same. In fact, they can become different beasts altogether. Both creative writers and journalists need to have a knack for words, and a strong interest in what makes the world spin. Beyond that, it’s a whole different game. 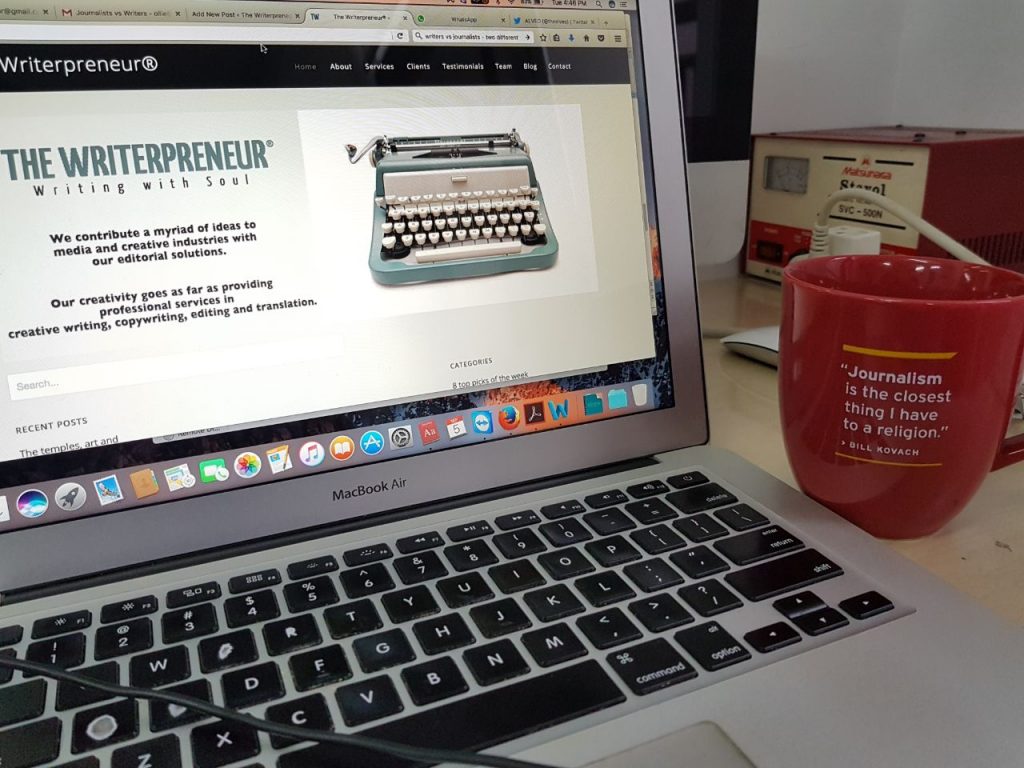 Many creative writers choose to do the deed in private; many of them have been known to be reclusive (Thomas Pynchon came to mind). Yes, they will go out of their cave and meet people, but not as part of the writing process. We heard that some writers have some people do some research for them about things they want to include in their book; Stephen King is one example. If not asking his researcher to research a specific issue, he’s also known to go out himself and interview people having specific skills and working in specific fields to get information on how stuff work, so that he can inject realism into his fantasies, thus, engaging the readers more in his stories of the eerie and the fantastic. But, for the rest of the time, it is the writer and the word processor.

Journalists shine under the light; that’s pretty much what they’re after. They need to be at the center of things: To be the eye-witness of world-shaking events and write about it. To see their name in print they compete with other journalists, are there at the same time and the same place and try to shout the loudest and win the attention of all. Self promote themselves they will, to win interviews, to get the best place in a press conference and other media events. Journalists engage themselves in the events, crafty in their words to entice their sources to talk and then talk some more.

Creative writers want to create a world. The bigger the better. They inhabit it with characters big and small, living and dead, each having their own stories begging to be told and more conflicted than the previous one. They thrive on plot devices. Just remember: Plot device should move the plot forward, and not be used to prolong the story. Creative writers then shun deadlines as deadlines clog their vast and bottomless well of creativity. Thus, creative writing is complex and employs more styles than journalistic writing does.

When it comes to how much you can write, journalists are not so lucky. The number of words in their article are limited to how long their editor want the article to be. They also have deadlines. So, they need to keep things simple, concise, and practical. Imagination is never an option and facts are king, as even what sources insist on saying is true requires double or triple check, or as the tough-as-nail editor Snapper Carr character from Supergirl™ TV series says: “We believe everyone is lying until we can prove they’re not.”

Both professions, of course, can supplement each other, and there is a slew of creative writers-cum-journalists out there. Whatever they are, they are expected to be able to present tired centuries-old stories—corruption by those in power, tragic loss of one’s loved ones, love once surrendered regained, economic downturn following predictable misstep by the privileged few, or others—into something fresh, enticing and important. So, whatever you are interested in writing, when you write for a living, you are a writer. The important thing is what you write matters, or you know how to make it matter.