For risk-taking businessman-cum-guitarist Hilmi Panigoro, nothing is impossible. He tells Aulia Rachmat Sungkar about the risks he encountered while growing his oil and gas company. While welcoming The Peak to his comfortable office in Jakarta’s prime business district, PT Medco Energi Internasional Tbk chairman and president commissioner Hilmi Panigoro explains, with an avuncular smile, that his company is due to move to larger premises quite soon.

Construction of a brand-new office block close by is almost complete, and will enable staff currently split awkwardly between three sites to work under one roof.

“Growing larger is an expression of my vision and optimism. It reflects my long-held dream that one day Indonesia would have its own private oil and gas companies, rather than relying on foreign firms or Pertamina as the sole, state-owned oil and gas corporation.”

His dream has reached fruition. However, it has taken much endeavour for Hilmi to develop Medco into the leading private oil and gas company in the archipelago. His risk-taking approach was what paved the way for revamping a company established by his older brother Arifin, in 1980, to reach the heights.

Hilmi, whose normal work attire is a traditional batik shirt, took over the running of the company from his brother in 2001. It now has approximately 3,000 employees (working for MedcoEnergi) and 14,000 under the umbrella of PT Medco Energi Internasional Tbk. 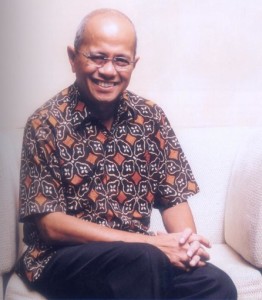 Soon after he graduated with a bachelor’s degree in geological engineering in 1981 from Bandung Institute of Technology (ITB), Hilmi started out on his career as a well-site geologist at HUFFCO (now VICO, Virginia Indonesia Company), a US-based oil and natural gas exploration firm operating mainly in Indonesia. With a combination of diligence and hard work, the determined Hilmi eventually achieved success as company vice president in 1993, three years after HUFFCO became VICO.

After more than a decade of upward rising, Hilmi decided to leave the VICO comfort zone in 1997.

Indonesia’s financial crisis was just beginning, so to leave VICO for Medco, which was then a much smaller firm, involved no small risk. “I felt I just had to do it – to direct Medco to become the country’s top private oil and gas company!” says Hilmi, who also studied for an MBA at Thunderbird University, Arizona, in 1984 and a masters in petroleum geology at Colorado School of Mines in 1988, both courses being sponsored by HUFFCO.

Asked whether he considers himself a risk-taker, Hilmi replies unhesitatingly, “Of course I do! Indeed, risk-taking is in my blood and it should be an integral part of being in business. In the oil and gas industry it’s a part and parcel of everyday life.”

Given Indonesia’s current position, in which domestic oil consumption exceeds production, he explains, “You’re lucky if you’re successful with one in five explorations.”

Referring to Indonesia’s recent withdrawal from the Organization of Petroleum Exporting Countries, Hilmi adds, “Not only do we import oil, but with a currently unstable crude oil price in excess of US$110, you must be a risk-taker to be a player in the industry.”

Medco started out as a drilling-services provider and stayed so until the early 1990s. While Hilmi was VP at VICO, he sometimes helped his brother to develop a new division: E&P; (exploration and production of oil and gas). Consequently, brother Arifin credits Hilmi as E&P; founder.

Prior to that, all oil and gas exploration here was carried out by foreign companies. “So, Medco became the pioneer!” says Hilmi, proudly. The achievement was recognized when respected financial services firm Ernst and Young awarded him for entrepreneurship in 2005 in the Industry and Manufacturing category. 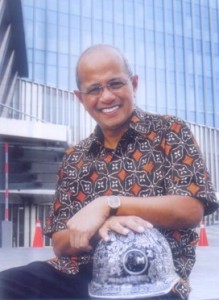 While Hilmi studied at ITB, he also taught classical guitar at the Indonesian Music Foundation (YMI). Indeed, he won second prize in 1975 at a national classical guitar competition and was about to take a scholarship to study the instrument in Italy. ”I had a difficult decision to make: whether to become a musician or continue with my undergraduate engineering studies,” says Hilmi, reminiscing.

Nevertheless, his passion for music, including skill as a pianist, has remained. “Basically, I like all kinds of genres. Not only do I admire timeless classics from guitar composers like John Dowland and Francisco Tarrega; I also like rock-and-roll from bands like the Rolling Stones, Beatles, Grand Funk and Deep Purple.”

Hilmi regrets that Indonesians in general have yet to fully appreciate the beauty that music can offer. “Classical music has the capacity to inspire one’s intellect,” he remarks.

Hilmi is also keen on sport, particularly golf and swimming. Golf is his second leisure activity after playing guitar. While Pantai Indah Kapuk Golf Course and Jagorawi Golf & Country Club are where he usually plays, Tiger Woods and Jack Nicholas are his idols. “I like playing tennis, too, and I enjoy watching the tournaments,” Hilmi says.

Photography is another hobby. “Although I like to take photos of different scenes when travelling, as a geologist I especially like to capture geological formations.”

THE IMPORTANCE OF INTEGRITY

Hilmi is the sixth of 11 children whose parents owned a small garment shop in Bandung. As his parents’ business went bankrupt in the early 1970s, Arifin, as the oldest in the family, took responsibility and supported his younger siblings.

To Hilmi, Arifin is not just the family hero; Hilmi says he would not have succeeded had it not been for Arifin’s shining example, a product of more than 30 years of business experience.

“When following your intuition – in business particularly – you sometimes need to rely on your sixth sense. It’s important to ‘know’ when it is the right time to enter a business” Hilmi says.

During the financial crisis, many companies went bankrupt as they were unable to pay their debts. Medco had potentially the same problem. In 1998 the company had to borrow from a bank to clear its debts. However, Hilmi was sufficiently confident that through internally generated cash-flow the loan could be repaid within five years. His sixth sense worked and the debt was cleared.

Asked his view on Medco’s prospects in the long run, Hilmi replies ambitiously: ”We’re continuing to climb to become a market leader and global player. As Medco’s market capitalization is now around US$1.7 billion, I’m confident we can grow to $7b by 2012, although I’m actually targeting $10b.”

While Hilmi stresses the importance of being fair in the treatment of employees, clients and business partners when seeking win-win solutions, honesty is ultimately of greatest importance. “That is what has made us sustainable in the business,” he says.

He also acknowledges the power of networking in helping Medco to achieve great success. “Having a million friends is not enough, while one enemy is too many,” he remarks. “And especially when dealing with your creditor, responsibility is crucial: You must repay your debts!”

Published in The Peak Magazine, November 2008, as a cover story.