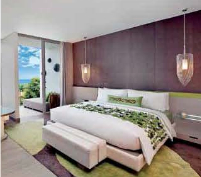 Petitenget is the name of the fab lane where designers, artists and socialites, not to mention jetsetters, are often spotted rubbing shoulders in this neck of the woods. It’s an eclectic neighbourhood whose establishments form a microcosm of hip Bali – Mantra with its rustic charm, Biku with its modern translation of traditional Balinese, and Potato Head Beach Club with its reputation as the island’s concert Mecca. In that context, the existence of W brand in the area only cements Petitenget’s reputation – and Woobar intertwines the beauty and the beat!

It’s not an overstatement to dub W Retreat & Spa Bali – Seminyak the most stylish resort in Bali. An unmistakable Midas touch gentrifies every detail of the interior. The retreats – aka the rooms – and the suites number 158 in total, under six categories. I stayed at the spectacular Ocean Facing Retreat on the fifth floor, which boasts a breathtaking view of Seminyak Beach. This expansive room reveals a swanky bathroom replete with a deep soaking bathtub – perfect for two – and a rainforest shower, all complete with a panoramic skylight spectacle.

What further impresses is the tasteful bedroom. It has a gorgeously comfortable W bed with goose down comforter and a BOSE sound system. The W also houses great villas from one-bedroom to three-bedroom. All are decked out splendidly to cater for fashionable honeymooners and chic families. One thing that the ladies will love is the direct access to the 24-hour AWAY Spa straight from the opulent villas. 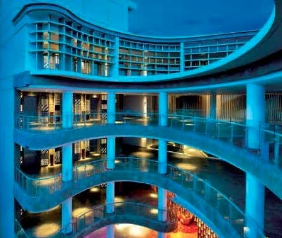 W takes entertainment seriously. Strut into the lobby in the afternoon for a quick check-in and you’ll be treated to a tantalising array of apple toffees and cakes during the High Tea at W Lounge. For dinner, Starfish Bloo will definitely blow you away – kudos to chef Kevin Chung! And FIRE – the signature pan-Asian dining counter – sizzles all the way with its grilled gourmet fare. Last but not least is the sophisticated Woobar, whose roaring ceiling fan reminds me of a chopper.

W Retreat & Spa Bali – Seminyak is a resort designed with intelligence. Not only does the architecture embody the spirit of modernity, but it also gives off hints of Balinese in a very subtle and contemporary way. I adore the rattan-woven lamps at W Lounge, which actually resemble Balinese temple bodywork. Yet when night falls and I’m about to switch off my mind, the cosseting bed and the murmur of crashing waves make up a perfectly “wow” experience.