With more than a decade of property development under his belt, Veri Y. Setiady enthuses to Aulia Rachmat about the form that cities will take in the future.

“It’s time for city-dwellers to ‘get into’ a vertical lifestyle,” Veri Y. Setiady said while peering down at traffic congestion from his office on the 25th floor of an office block in a prime area of South Jakarta.

His view is a reflection of the reality that the fast-growing population in big cities has been a major factor in the price appreciation of urban land. “Traffic congestion is incontestably affecting demand,“ he continues. “Many people are seeking a solution where a mix of land uses like shopping, living, entertainment and work are combined into one destination. They want to live closer to their work and spend more time with their family.”

Involved with an array of development projects by the Agung Podomoro Group (APG) since 1999, Veri has made his mark in completing The Peak apartment block at Jl Sudirman and has been a mover and shaker at Senayan City mixed-use development.

In addition to being Senayan City’s marketing director, Veri is currently taking a lead role in another huge Agung Podomoro mixed-use project, Central Park, as director of commercial retail and shopping center.

Occupying two high-level posts under the APG umbrella is no easy task. He adds that the upcoming presence of Central Park will greatly contribute to the one-stop lifestyle that is happening now in big cities.

In spite of some challenges that developers faced after the Asian financial crisis in the late 1990s, Veri says that property markets are now healthy.

Rising consumer demand and an increase in private investment have urged banks to participate in the enthusiasm for bringing the property sector back to life after the crisis.

And notwithstanding another global crisis the world is facing today, property is still a magnet for investors in Indonesia. “For those renting out their apartment, the return on investment can exceed 20 per cent while the property value can rise by as much as 50 per cent on initial price offering.

Given the size of the country, and that shelter is an essential necessity along with clothing and food, there is enormous potential in the property sector, he says. 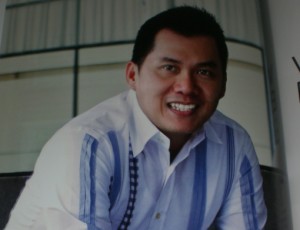 In big cities like Jakarta, Surabaya, Medan and Bandung, where land values have been rising fast, the response has been that myriad apartment buildings have come on stream, not just for high-end urbanites but also for those in the middle- and even lower-income brackets.

“While apartments like those at Senayan City have captured the brisk market for well-to-do residents, the demand for low-cost apartment has dramatically increased,” says Veri, referring to 10,000 low-cost apartments in Kalibata (South Jakarta), Bandung (West Java) and Samarinda and Balikpapan (East Kalimantan) that have been developed by APG.

“More middle-class people are now interested in buying apartments owing to increased fuel and transportation costs …and sales of these units are mushrooming! Who said people would not buy property when oil prices and interest rates were surging?”

Born in 1967 and raised in Tanjung Pandan, Bangka Belitung province, Veri moved to Jakarta in 1987 to study architecture at Trisakti University. While still an architecture undergraduate, he started his career as a project architect at PT Sinar Wijaya Eka Pratista, a joint venture of PT Duta Pertiwi (the real-estate division of the Sinar Mas Group) and PT Wijaya Karya in June 1991. He completed his bachelor’s degree the following year. He then worked for several developers before climbing to the top at APG.

Veri likes to teach as he has a passion for sharing his knowledge with others. “I regularly train my team and always enjoy being a guest speaker at events or seminars. I’d love to lecture in property, but I’ve had to prioritise my commitments, particularly at leading the flagship Central Park project.”

Despite his professional dedication, Veri regards time off as important. He likes travelling and enjoys sightseeing, especially studying the vernacular in different places.

“Life is … too short to waste. You should open your senses, soul and mind to absorb the beauty that life has to offer,” Very advises.

He adds that clear and open communication helps him build richer, clear and more effective relationships with people. “An effective communicator explores all the possibilities and, when exhausted, looks to discover even more. That philosophy has motivated me to move and think faster and act ahead of time when it comes to my daily routine.”

His enjoyment of dealing with people from a variety of cultures and backgrounds is what has given Veri a yearning to visit different places around the world. “I love Dubai best and have been there several times. The innovative architecture of high-rise buildings in the Middle East’s most spectacular tourism hub is truly astonishing. I also like Beijing. Many new buildings with distinctive architecture have made the city look fabulous. The striking beauty of Tokyo is most impressive. Despite its high population density, the city’s cleanliness, inviting sidewalks and greenery really amaze me.”

In Tokyo, vertical mixed-use developments have become part of an urban setting that allows both small and large enterprises in residential neighborhoods to promote commercial activity.

The Tokyo model has been determined by limited land availability – a constraint that many developers worldwide currently face. Mixed-use development has therefore become a destination for developers in major metropolitan cities like Tokyo, New York and Dubai, Veri explains.

Likewise, high-rise city center developments – where upscale residential accommodation, luxury offices, commercial and entertainment space are combined – is providing a solution for Jakartans to escape the city’s notorious traffic that condemns workers to endless hours in their cars.

Asked his view on Bali, Veri replies that building upwards is inappropriate in the island of the gods. “I’d say that a lifestyle center with innovative ethnic design where retail and shopping centers are combined with an entertainment arcade, cafés and bars is what Bali needs.”

The market for retail businesses and shopping centers in Indonesia has huge potential, Veri states. “But we must adopt strong design concepts to cater for Indonesians who thirst for an innovative shopping ambience in order to catch up with markets in neighbouring countries like Singapore.”

Singapore has long been a major regional shopping hub, and retail facilities there cater well for both locals and foreign visitors. “Retail productivity per square meter is high due to the large amount of tourists,” Veri remarks.

In contrast, retail businesses in Indonesia cannot depend on foreign tourists and need to focus on the domestic market. Both Jakarta and Bandung, for instance, have great potential to attract visitors from other cities or regions in the archipelago. As more famous, high-quality brands find their way to the capital, the presence of Jakarta’s many malls as the trading place for retailers is turning the city into a happening place, Veri observed with obvious excitement.

Family karaoke and sports facilities are also becoming increasingly popular in malls nowadays. Veri regularly works out at a gym in a prestigious mall three to four times per week. “I especially like running on the treadmill and lifting weights. I also like swimming and playing tennis.”

Asked if he’s into music, he replies, “Music and sports are ‘two-in-one’ that illuminates my life. I enjoy all kinds of music from classical to jazz and Indonesian pop, but not rock and roll!” he says with a laugh.

Veri is also a member of the New York-based International Council of Shopping Centres (ICSC), a global association of shopping centre industry players. ICSC has around 75,000 members ranging from shopping center owners and developers to investors and marketing specialists in 80 countries.

ICSC activities such as retail conferences and exhibitions, Veri says, help him to “think outside the box” when brainstorming to produce design concepts for more innovative shopping centers.

For a property person going places like Veri, his professional enthusiasm is quite clear: “I’m not aiming at any particular position, but I’d like to see APG go public,” he says.