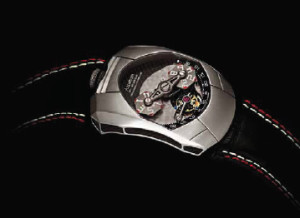 It doesn’t take long to realise that an Azimuth watch looks nothing like what you are wearing on your wrist right now, or that the company’s message to create unique timepieces is clearly an understatement; in some cases, you’ll need someone explain to you how to read the time on one of its creations.

It is, however, due to this super avantgarde approach that Azimuth has built a loyal following. Made in Bienne, Switzerland, Azimuth has 35 distributors around the world. Perhaps surprisingly, its proprietors are Singaporeans Alvin Lye and Christopher Long. Both of them are avid collectors of vintage Swiss watches, and by 1996 Lye was already dealing in pre-owned vintage watches through the internet – quite an unusual medium for the industry at the time.

Over time, Lye established a significant network within the Swiss watch industry, to the point of being able to acquire rare movements. Finally, in 2004, he teamed up with Long to launch Azimuth watches. 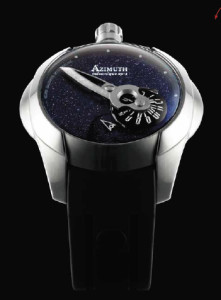 “A lot of brands are restricted by their history and heritage. We are not restrained by anything, and want to be as creative as we want to be. We make our designs simply because we can,” says Lye, adding that the initial investment was a humble $60,000.

“It is not about the money; it is the know-how, the back end of the company,” he points out. “You can invest millions of dollars, but if you don’t know what to do, it’s no use.”

“Azimuth is for people to show a personality, those who want say ‘I’m different, I’m not like everybody else.’” Tellingly, Lye has had strangers on the street stop him, pull his hand and ask him what watch he’s wearing. It is also quite clear that Azimuth does not set out to create “me-too” pieces; he admits that they continually challenge themselves to make watches that are different on every front. 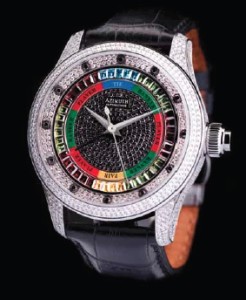 Not your normal collection

Because the company wanted to keep things as authentic as possible, it followed the original styling, which was to have no branding at all on the dial. “People said we were crazy not to put our brand on our first watch,” recalls Lye. “But because of that it became a hit; people were talking about this new watch company that came out with their first watch that had no brand on the dial.”

Today, Lye continues to work closely with an in-house team to design every Azimuth piece. Typically, after a Eureka moment, initial sketches are made, before they graduate to computer renderings. Once the Swiss watchmakers give the thumbs up, a prototype is created. If everything is a go after that, they proceed to create the end product. 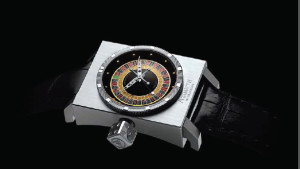 “During the design process, my guy in Switzerland often remarks that I am out of my mind,” Lye says with a laugh. “But what’s great about him is that he’ll tell me that he’ll think about it, and if it’s not possible to pull off a particular design, perhaps we can do it by moving a component to another place.”

From producing watches that come with a roulette table and pieces that look like spaceships, to the retro toy-robot Mr.Roboto watch, there is no limiting Azimuth’s design landscape. Perhaps its most iconic design is the 2009 Twin Barrel Tourbillon. Inspired by high-end supercars, Azimuth made 25 at $100,000 apiece.

Baselworld and things to come

“A few years ago my Swiss partner asked whether we wanted to take part in Baselworld, and I said, why not,” Lye recalls. “There is usually a waiting list of three to five years, but it was quite the honour that the organizers asked us to come.”

He was quite possibly the only Asian exhibitor in Baselworld. To his surprise, his roulette watch was voted the Number One watch of Baselworld 2009 by American journalist Jonathan Bues. 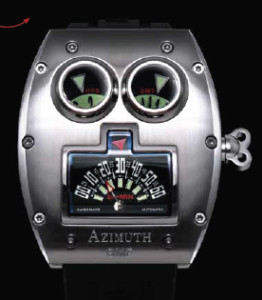 The company bowed out of the exhibition this year, and will spend the rest of 2013 restructuring itself following merger and acquisition discussions with a large Swiss group. The conclusion of the negotiations, Lye says, was that Azimuth is happy to stay proudly independent.

“Azimuth will use the rest of 2013 to come up with even more up-to-date and relevant watch works for 2014,” he adds. “What better way to celebrate our 10th anniversary next year with a big bang, by announcing new plans and a totally new line-up of Azimuth watches?”

Part of this “big bang,” he lets on, will be an updated, refined philosophy, as well as a total revamp of its boutique, website and product range, to more accurately reflect the Azimuth DNA.

Published in The Peak Indonesia, June 2013.