Combining his interest in human behavior with his marketing savvy, veteran academic leader Thomas S. Robertson is driving innovation to advance a top US business school as a force for global economic growth and social change.

As the dean of Wharton School at the University of Pennsylvania, the world’s oldest collegiate business school, Robertson has made significant changes in shaping the direction of the 131-year-old Philadelphia-based elite business school, currently ranked among the top three in the US.

He began by establishing three pillars – social impact, global presence and innovation – to serve as the foundation of Wharton as a business school. To manage the three components, Robertson created three new positions at Wharton: vice deans for social impact, international business and innovation.

“Social impact communicates straightforward ideas that Wharton, as a business school, produces educated and socially responsible business leaders. To make the most of international opportunities in today’s interconnected world, Wharton is looking to expand its presence across the globe,” explained Robertson.

“Innovation is the most important of the three pillars, as it is central to our culture. Innovation at Wharton has helped develop global presence and social impact.”

Robertson, who turns 70 in November, was in Jakarta to attend the 43rd Wharton School Global Alumni Forum. The forum, held in June, was the first to take place in Jakarta since its establishment in 1993.

The native of Scotland said he was focused on dealing with various people with different characters. He started his academic career in the field of sociology, but later chose business with a focus on the human side. He is also an expert on marketing strategy and competitive behavior and has written many books. 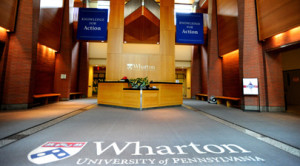 “I incorporate sociology into my research on consumer and competitive behavior. Combined with my marketing knowledge, my goal is to broaden awareness of Wharton as the world’s oldest business school and make the school a force for economic and social good. The three pillars reflect my goal since I took the helm in 2007.”

Wharton has recently come up with a new brand platform to differentiate it from other elite business schools.

“It started in 2009, when I decided to lead a team of faculty for a two-year rebranding project. Innovation is what drives Wharton to create knowledge with consequences for the world. Our new advertising tagline is ‘Knowledge for …’ This is a flexible brand message as it can go with a variety of words that reflect education at Wharton: Knowledge for Action, Knowledge for Global Impact, Knowledge for Life, and so on,” said Robertson, who is also the professor of marketing. 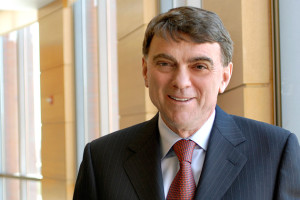 He added that the ultimate measure of Wharton’s success was in its ability to transfer knowledge into industries around the world.

consulting firm. You hire your faculty because they are capable of being independent. They can do research and develop their teaching with very little help. Half of my job is to encourage faculty to go in new directions and create a positive environment. The other half relates to fundraising,” said the leader of the school with US$550 million in campaign capital.Robertson has also revamped the school’s MBA program, which is due to be implemented in the fall of 2013. 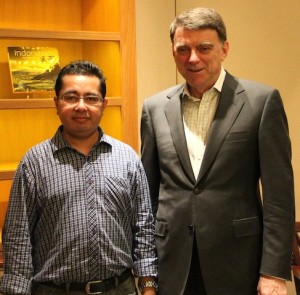 “The new curriculum will emphasize the three pillars with more international customized courses to address globalization challenges, with the objective of creating a larger job market for MBAs around the world,” he said.

“We are a global business school with students coming from many countries worldwide. Nearly 40 percent of our MBA students and around 35 percent of the fa

culty members are foreign. So, our courses should be internationally tailored to prepare our students to embark on their careers globally. One of the things that is critically important for our students is if they can introduce that innovation in the organizations where they work.”

He has deep roots in Wharton, starting his academic career as associate professor there in 1971 and subsequently serving in various posts in the school. He was Wharton’s associate dean for executive education from 1984 to1988. His international experience includes serving as deputy dean of the London Business School from 1994 to 1998.

He is credited for boosting the reputation of the Goizueta Business School at Emory University. During his tenure as dean, from 1998 to 2004, Robertson managed to increase the size of the school’s faculty by 73 percent and double its revenues.

Married to Diana Robertson, the couple has three grown children. Their son Brian, their eldest child, and daughter, Ashley, both live in London. Their younger daughter, Alexandra, recently completed her MBA at Wharton and has moved to Cincinnati to work at Procter & Gamble.

In his spare time, Robertson likes playing tennis, running, going to the gym or eating out with his wife.

“I like Japanese, Mexican, French and Italian cuisines. My culinary taste is eclectic as I easily get bored.”

Robertson travels a great deal, mostly on business, and identifies Istanbul, London and Napa Valley as his favorite destinations.

“The forum has served as a catalyst for a strong, professional network to address challenges and learn how innovation can turn them into opportunities in the current globalization context,” he concluded.