Must-visit cultural, and Insta-worthy, attractions in the Capital City of Central Java

When it comes to travel destinations in Central Java, Yogyakarta certainly comes first to mind. Slightly less popular than Yogyakarta is Semarang, which is the
capital city of the province. The city’s name is said to derive from two Javanese words “asem” and “arang,” and was made as the capital of Central Java after
Indonesian Independence. During the colonial period, Semarang served as the VOC city, which is why today you will find Dutch influences in the architecture of the city. Other than its beautiful architecture, Semarang is also known for the food, cultural diversity and interesting tourist attractions. 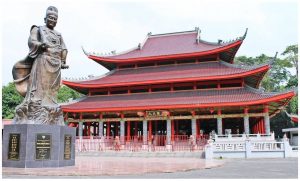 Sam Poo Kong serves as the place of worship for those who hold Confucianism belief, furthermore every lunar year,von the 30th day of the sixth month,vSemarang celebrates the anniversary of Zheng He’s arrival, on this day Chinese Indonesians would parade statues of Zheng He, Lauw In and Thio ke from Tay Kak Sie to Sam Poo Kong . 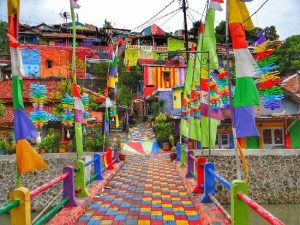 Lawang Sewu
Lawang Sewu or Thousand Doors is another popular landmark in the city. It was built in 1904 and used as the headquarters of Dutch East Indies Railway Company. The place is called Thousand Doors because it has plenty of doors and arcs, it has about 600 windows and divided into several buildings with the
two main ones are called building A and B and two smaller ones are called building C and D. This place now serves as a tourist attraction, rumor has it that Lawang Sewu is haunted. There are tour guides available at the building’s entrance, for those who are searching for some paranormal experience, the building’s underground jail might be worth visiting.

Kampung Pelangi
This is the perfect tourist attraction for Instagrammers out there. Originally named Kampung Wonosari, the village is now more famous as Kampung Pelangi or
Rainbow Village. The place is located in the southern part of Semarang and houses 232 homes painted in bright eye-catching colors set in two community units. 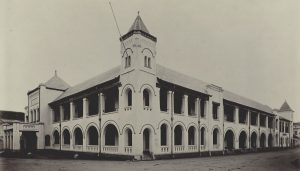 Old Town
Semarang’s Kota Lama (Old Town) is located in the intersection of Jl. Pemuda and Jl. Imam Bonjol, it’s where visitors get to see authentic Dutch colonial buildings. There are around 50 colonial buildings here that are being maintained by the City Administration and the oldest of them all is Blenduk Church (Nederlandsch Indische Kerk) which was built in 1753. If you’re visiting this place, don’t forget to make a stop at Klitikan Market which has plenty of
antique shops.

Simpang Lima
Located in the city center, Simpang Lima is a large square and shopping district that comes alive at night. You can find everything here from restaurants, shopping centers and hotels. When the evening comes, visitors can tour around the area, rent a decorative bicycle or hail a decorative becak (pedicab).