The mushrooming of superblocks in Jakarta is now reaching to the eastern part of the city with a unique mixed-use project where sport activities and community lifestyle are nestled under one estate.

Built on a 34-hectare land in Pulomas Green Land, Pulomas X’Venture features a jungle concept of mixed-use development surrounded by horse racing activities with golf course as the backyard.

The project is developed by property developer Paramitha Bangun Cipta Sarana with Coldwell Banker Indonesia as the property consultant that helps do the marketing and building management. It is said that Pulomas X’Venture will become the only superblock in Indonesia where living and commercial sites are conjoined with an open green space that facilitates jogging, bicycle and horse racing tracks.

Jakarta has been experiencing a new trend in property with developers competing to build superblocks or mixed-use developments as a one-stop lifestyle destination, most of which are seen in West, Central and South Jakarta.

In the northern part of the city like in Kelapa Gading area, a number of mixed-use developments have attracted those craving to have a home close to their daily routines. 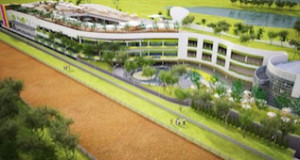 Eastern Jakarta is growing, too. With easy access to major toll roads that link to the city’s thoroughfares, developers are now going for mixed-use developments in the area.

Harjanto Widjaja, operational director of Paramitha Bangun Cipta Sarana, says that Pulomas offers great potential for property market in the eastern Jakarta. “Location is always an advantageous aspect that determines a business outlook. And we have chosen Pulomas Green Land as the location for Pulomas X’Venture project. Not only the area is known for its greenery surroundings, but no less important, Pulomas Green Land is one of the famous hubs for international standard equestrian activities in the country. And we are building the X’Venture as a lifestyle destination with horse racing entertainment.”

Paramitha Bangun Cipta Sarana is not a new player in the property sector despite the fact that Pulomas X’Venture is the developer’s first mixed-use project. The developer’s portfolio includes a number of landed housings and hospitality project of Swiss Bell Hotel.

Harjanto is very confident that the X’Venture will become the benchmark for the future birth of more innovative superblocks. “We are building an equestrian nuanced mixed-use development that puts horsing activities as the central attraction. In addition to a variety of retail stores and entertainment centers, the mall at the X’Venture will have an array of F&B outlets built with an open air concept surrounded by horse racing track that allows visitors to enjoy live equestrian events.” 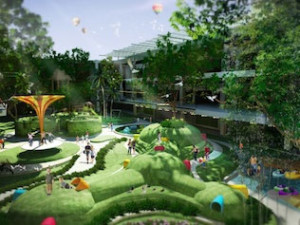 In addition to horse racing view, the presence of 9-hole golf course in the backyard can be a great alternative for those seeking a fun golfing in equestrian nuanced greenery.

“In building the mall, we also apply green building concept toward environmentally sustainability with interior designs featuring a jungle concept in four seasons; summer, fall, winter and spring. The concept also creates a healthy unique mall with a range of other facilities for your family activities such as jogging and bicycle tracks, trampoline, flying fox, park with labyrinth tunnel, and more,” he explains.

Harjanto adds that the mall will feature the most advanced technology edutainment from Europe. “I can’t elaborate on this as we are still in the middle of negotiating with our prospective partner. But what I can be assured of is that we are going to provide an edutainment facility for children using the technology that can enhance their current perception of reality, to directly view a physical and real world environment. For example, a kid can wear customized glasses to see virtual reality of living animals such as horse.”

ON THE RIGHT TRACK

As a mixed-use development, Pulomas X’Venture is building an urban setting for different economic activities. This project’s green architecture is characterized by residential and commercial developments.

“We are targeting middle and high-end market, as well as expatriates who work in East Jakarta’s industrial zone, most of whom are from South Korea, Japan, Singapore and China,” Harjanto says.

The X’Venture development comprises a mall and a hotel slated to operate in the first quarter of 2012 and by the end of 2012, respectively. In addition, the development will include two residential towers housing 800 units altogether, in which the project is schedule to commence in the mid of 2012.