By Ruth Ninajanty. Originally published in The Jakarta Post, 21 December 2017.

The most wonderful time of the year is often celebrated with the most delicious meal of the year. As the festive season arrives, special set menus are taking over the dinner tables. Some stick to the conventional ham, cranberry sauce and fruit pudding, while others may add a modern twist to their family recipe. 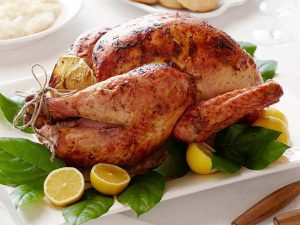 Roast turkey and glazed ham are often spotted on the Christmas menu of different restaurants in Jakarta. Some restaurants go extra fancy by offering Black Angus tenderloin, scallops, salmon and foie gras. Others even prepare Yule log, a traditional sweet sponge cake, also known as a Swiss Roll, made to resemble a log. “The modern, butter-creamed appearance of Yule log belies its long history,” explains Alysa Levene in her book Cake: A Slice of History. The original Yule log, was actually a piece of wood that was kept burning through the night to cast off evil spirits.  “Gradually, a cake seemed like a more manageable tribute to the original log,” she wrote. Each Yule log is unique and, as you dine around the city, you might encounter beautifully decorated Yule logs waiting to satisfy your sweet tooth.

Something sweeter than the Yule log, which has been gaining popularity outside Canada and the United States, is eggnog. This sweetened dairy drink is common during the holiday season, especially when spirits such as brandy, rum, whisky or bourbon are added to the mix. These days, eggnog has become an everyday beverage such as coffee, latte and tea, and it is even made into puddings. 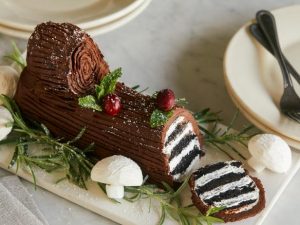 However, depending on which part of the world you are in, what’s on your Christmas dinner plate may surprise you. After all, Christmas is the time of the year when you show off how much you can eat. “Dried fruits and spices are common characteristics of Christmas cakes around the world, but beyond those similarities, there is considerable variation,” Alysa explained.

New Year’s eve might be lighter when it comes to food, but you should still leave 2017 with a blast. Famous United States food channel The Food Network recommends a New Year’s Eve menu that consists of simple party foods and canapés like roasted shrimp cocktail, spinach artichoke dip, stuffed mushrooms and baconwrapped pineapple and shrimp. What makes it special is the whole package, which often includes either fancy wine and dine, or a lively DJ and fireworks show. Barbeque parties are also a tradition on New Year’s Eve.

Add a twist to the hotel buffet you selected to end 2017 with a full stomach by includes these superstitions on how your New Year menu might affect your life next year: Eat more greens because it resembles money, and more beans because it resembles coins. “Many food superstitions associated with New Year’s persist to this day,” wrote Jennifer Thompson, the author of The Joy of Family Traditions: A season by Season Companion to celebrations, mentioning examples of Southern dinner superstitions, namely black-eyed peas for luck, rice for health and turnips for good fortune. Meanwhile, in Germany, prosperity is gained through consuming carrots and white cabbage because they symbolize gold and silver, respectively.

But in the end, it does not matter whether you have a homecooked meal at home or a tasty banquet outside as long as spend holidays with the ones you love.