Fancy taking a bajaj from Jakarta all the way up to Thailand? No, we didn’t think so… 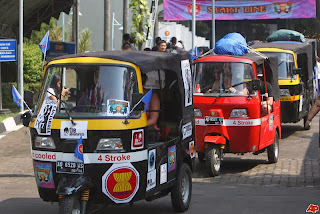 Powered only by diminutive 175cc motorised rickshaws (which are known to Jakarta residents by their brand name of bajaj), a group of thrill seekers recently tackled an arduous trek from Jakarta all the way to Krabi in Thailand as they rose to the challenge of the ﬁrst ever ASEAN Rickshaw Run.
Looking perhaps a trifle fatigued but still smiling, the run’s participants finally sputtered towards the finishing line on Friday and Saturday, October 28 and 29 after a gruelling two-week, 3,000-kilometre burn across three countries.
The race’s 28 teams, comprising of 66 members from twelve countries, were ﬂagged off from the ASEAN Secretariat building in Jakarta on Sunday, October 16 and this perhaps somewhat eccentric contest got underway. The teams in question were from Australia, New Zealand, England, Scotland, the United States, the Netherlands, Italy, France, Germany, Finland, Spain and Singapore.
Initially, the race’s chequered ﬂag was to be taken in Bangkok, however due to the recent biblical ﬂoods that inundated the Thai capital, the official ﬁnish line was moved to Krabi.  CoolBeer, a team of British and French drivers, were the ﬁrst to reach the ﬁnish. In fact, the So..? team from England had arrived at the ﬁnish some time earlier, but their rickshaw was sitting forlornly in the back of a truck.
And they weren’t the only racers to experience problems as a number of teams had to cope with breakdowns along the way. Help was always on hand, but the back of a truck was the most popular way for the race’s sick rickshaws to reach the ﬁnish.
“We spent the last day of the race in the back of a truck used to carry horses. The ride took nine long hours and three of us with our beloved auto-rick travelled all the way from the Thai border town of Dannok to Krabi,” explained Singapore’s Sambal Sandwich team, who came in a disappointing last.
With teams of two or three crammed inside the tiny, non-AC interiors of their trusty yet underpowered 175cc bajajs, the hilly roads of Sumatra seemed to be mission impossible. However, Sumatra was just the beginning. After crossing the Strait of Malacca, further challenges awaited as the participants chugged northwards from Penang in Malaysia all the way to the southern part of Thailand. The race proved to be a crazy journey packed with bucketfuls of thrilling adventure that included mountains, rainforests, beautiful natural settings and local charm. Bajajs however, lest anyone be in any doubt whatsoever, are not really cut out for long-distance road trips and it should come as no surprise to learn that all of the competing teams experienced multiple breakdowns and mishaps along the way.
Three British chaps from The People’s Republic of Sheffield (their team name) were even chased by a wild orangutan as they tried to repair their stricken vehicle. “Yes we had a somewhat intense encounter with a mommy orangutan. I don’t think I’ve made a new friend,” explained one of the team members on the team’s website.
The Adventurists, an award-winning English adventure company, organised the ASEAN Rickshaw Run in cooperation with the ASEAN Secretariat in order to raise funds for BirdLife International, the race’s official charity. BirdLife International is the world’s largest conservation partnership and strives to preserve birds and their habitats. The organisation also endeavours to help global communities achieve sustainability through the use of natural resources. Tom Morgan, CEO and founder of The Adventurists, has stated that BirdLife International will use the funds raised from the bajaj race to promote reforestation and to train local people around the region to become forest wardens.
Each team was asked to raise £1,000 for charity during the race and most of the teams posted regular updates on the internet to encourage people to donate via the race’s website. As of the ﬁrst week of November, the total amount of funds raised, according to the race website, stood at £10,600 and this amount will surely be put to good use.
Regardless of the many difficulties faced during the race, an impressive 25 of the 28 rickshaws taking part made it to the finish line. Eighteen of the teams arrived on Friday and there was a celebration party at a private 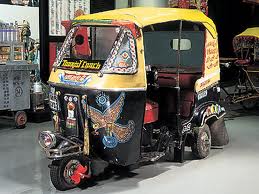 hotel overlooking the Andaman Sea and Krabi’s famous rock formations to enjoy. The remaining seven rickshaws arrived in town the next day, although three of the teams decided to abandon their rickshaws somewhere in Sumatra during the race owing to insurmountable difficulties.
The ASEAN Rickshaw Run was ﬁlled with thrills and challenges and the event was a unique way of promoting tourism in the region. As Tom from the Adventurists concluded, “South-East Asia has delivered us a massive slab of adventuring brilliance.
”For more news and information on the ASEAN Rickshaw Run, visit www.theadventurists.com
By Aulia R. Sungkar. Published in Jakarta Java Kini, December 2011.