Retracing the history of polo, the royal game that has won the hearts of the noble in many corners of the world. 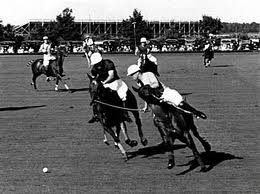 Historians have traced the origin of polo back over two thousand five hundred years. Some sources say that nomadic warriors made up the first team played the sport throughout history, while many agree that the game started in Persia. Despite the different views on who first played this game of kings, most historians would believe that the Moguls were the ones who brought the game of polo from Persia to the east.

History also noted that nomadic warriors were among the first teams playing this equestrian game during the beginning era of polo, which stretches back to before the Christian era. Indeed, polo is listed as one of the oldest sports in the world. The first polo tournament was held in 600 B.C. when the Turkomans achieved a victory by beating the Persians in a public match. But it was not until the year 1834 that the world’s first polo club was founded in Silchar in India. And the Calcutta Club, established in 1862, is the oldest club in the world that is still in existence today. 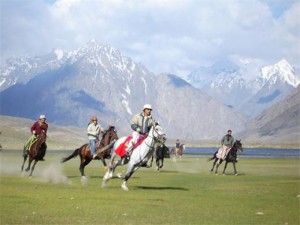 In the early history of polo, the Moguls used the game as a means of training the cavalry. The strategic game played in polo indeed resembles military tactics. The game of polo was also used for training cavalry in such countries as Constantinople and Japan in the Middle Ages.

The fast and furious characters of the polo game, coupled with the deep bond between horse and rider, later led the game to evolve to be the sport of kings. Throughout time, polo has adapted to some rule changes, but the game basic concepts remain the same.

Polo is indeed the most noble of pastimes by the Kings and Emperors, Shahs and Sultans, Khans and Caliphs of the ancient Persians, Arabs, Mughals, Mongols and Chinese. 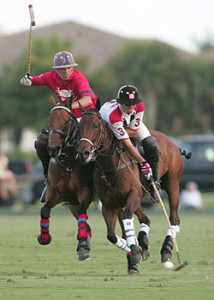 The game of polo is traditionally played on a grass field of 300 yards long by 160 yards wide. Traditional polo game is played in a team of three and the game involves more maneuvering and shorter plays at lower speeds. In the modern game, a team of four to five play in 4 to 8 chukkers, depending on the handicap of the game. Each chukker or period lasts seven and a half minute. To score a goal, the player must hit the ball between the posts, and the teams change sides after each goal.

Polo ponies, also known as mounts, are the most important element in the game. Thoroughbred and Quarter Horse are the most common breeds used in a polo match. For short distances, polo ponies are considered faster than racehorses.

Persians were arguably the ones that introduce polo to Indians in the 13th century, but it was not until the 19th century that polo became popular in India. In the mid 1900s, the British saw polo game for the first time, with Bengal Army Lt. Joseph Sherer being the first British who played the game. According to J.N.P. Watson, the writer of “The World of Polo”, Sherer was considered as the Father of Western Polo.

From India, polo then spread to England through military channels. Hockey on Horseback was the theme of the first polo game played in England in 1869. The first tournament held in the country was in 1876.

The birth of English polo was credited to John Watson, being one of the founding fathers in the country. The same year, in 1876, James Gordon Bennett, an acclaimed American publisher, introduced the game to New York City. Later, also in the same year, the first American polo club, the Westchester Polo Club was established at the Jerome Park race track in New York. In the first Westchester Cup in 1886, which also marked the first international competition, the English Watson led England to triumph over the United States.

Watson made the first set of polo game rules in the mid 19th century. Later, the Hurlingham rules were created to limit the number of players to five in a team. Soon after polo gained its popularity in England, the game spread to other nations within the United Kingdom. Today, the country is often associated with polo as the sport played by royals.

Going to South America, polo is very popular and widespread in Argentina. British immigrants introduced polo to Argentina in the 1800s, and soon polo rose to popularity with many estancia owners establishing polo clubs across the country.

The country has collected countless numbers of medals. The first World Cup took place in Buenos Aires in 1987, and it has ever since been held in Chile, Germany, Australia and Mexico.

Today, the game of kings is played in more than 80 countries, and many of the champions hail from the United Kingdom, the United States and Argentina.