Dubbed one of Asia’s economic tigers, Singapore has gained popularity as a destination for indulgent shopping, eating and partying, but also as a country with world-class health care facilities and an international-standard education system. 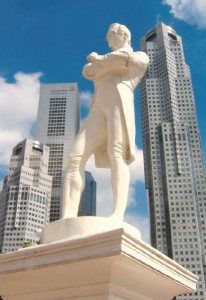 Indeed, the history of Singapore can be traced back to the beginning of the world’s globalized economy.

By the 19th century, the British were developing a trading empire and had their sights set on Southeast Asia. It was Sir Thomas Stamford Raffles who first saw Singapore’s commercial potential, as a British East India Company officer who arrived leading a small expedition to the island in 1819. He found the island to be strategically placed for a British trading post, and in 1819 signed a formal treaty with Sultan Hussein of Johor and the Temenggong to secure Singapore as a trading post.

Raffles later became eternally linked to Singapore, through his endeavors to take the island on a remarkable journey to become a metropolis.

The year 1826 marked the start of the rise of Singapore, when the British included it along with Malacca and Penang as Straits Settlements, for which by 1832, Singapore had become a center of government. In 1867, Singapore was declared a British colony, and two years later, the opening of the Suez Canal meant Singapore was strategically positioned as a major port for ships plying the trade route between Europe and East Asia. 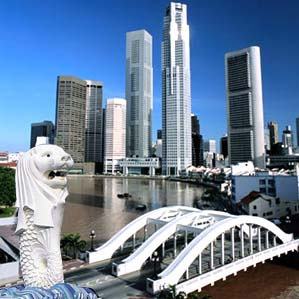 On Dec. 8, 1941, Japan attacked this prosperous island and began an occupation that lasted three and a half years. Upon the return of the British forces in September 1945, led by Lord Mountbatten, Singapore was handed over to the British Military Administration. On April 1, 1946, Singapore, Malacca and Penang became part of the Malayan Union.

Singapore was declared a Crown Colony by the British and in 1959 it achieved self-governance, with the country’s first general election held to choose 51 representatives. In that election, 43 of the 51 seats were won by the People’s Action Party (PAP), which remains to this day the country’s largest political party.

PAP’s victory took the party’s leader, Lee Kuan Yew, to power as Singapore’s first prime minister. Aiming to become part of a larger federation, Singapore merged with the Malayan Union in 1963, but this short-lived union ended on Aug. 9, 1965, when Singapore was officially declared an independent nation. 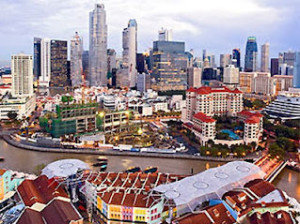 S.R. Nathan is Singapore’s sixth and current president, first elected in 1999. Meanwhile, Lee Hsien Loong, the elder son of Lee Kuan Yew, has served as the country’s prime minister since August 2004. The PAP won a 60.1 percent majority in the 2011 elections, securing 81 of 87 parliamentary seats and Lee’s re-election for a third term.

Today, the island state of Singapore is one of the world’s economic giants. “It’s a place of tremendous excitement and opportunity. A ‘work, live and play’ community where you can enjoy the perfect balance of personal and professional life,” said Suhaimi Sainy, the newly appointed Indonesian area director of the Singapore Tourism Board. Even though persons of Chinese ethnicity make up the majority in Singapore, it is also home to other ethnic groups, especially Malay, Indian, Arab and Caucasian. With English being the country’s official language, this Southeast Asian country celebrates a modern life with the joys of diverse ethnic backgrounds and cuisines.

The variety of foods contributes to a unique scene that has made the modern Singapore a melting pot nation and one of the world’s top tourism destinations. Visitors might be surprised at how many underground shops, restaurants and sightseeing places that they can find, just waiting to be discovered.

Singapore’s fast pace and vibrancy keep locals and visitors constantly engaged and stimulated. The country never fails to come up with a wide variety of refreshing offerings that are not only intended to spoil tourists but are also for locals to enjoy.

Whether it is watching concerts or Broadway musicals, attending museum exhibitions, indulging in amusement parks on Sentosa Island or strolling around the bustling Orchard Road, there is never a dull moment when stepping out in the city. And yet, in the middle of this constantly growing, bustling and modern city, it is easy to find tranquillity in the many beautiful and easily accessible public parks.

“There is always something for everyone to do in Singapore,” Suhami said. “The pace of change and dynamism means that each new weekend in Singapore is never the same as the last. You could be trawling in the malls for the latest gadgets and bags, savoring the wide variety of cuisines or even taking a ride at one of the attractions in Universal Studios Singapore with family and friends.

“Singapore continues to be a favorite destination for international tourists, especially for many Indonesians. In 2010, Indonesia was Singapore’s top international visitor-generating market with a record-breaking 2.3 million visitor arrivals.”

By Aulia R. Sungkar. Published in The Jakarta Globe Special Supplement on August 9, 2011.