As the use of the Mandarin language is on the rise, education in China has been well developed and is becoming more popular.

With the improved bilateral ties between China and Indonesia, China has become a study destination for Indonesians. 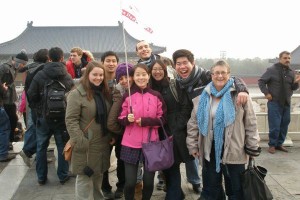 Indeed, China has welcomed foreign students worldwide since the late 1950s. As reported by Xinhua news agency, China’s Ministry of Education recorded more than 230,000 foreign students from 190 countries and regions studying on the Chinese mainland in 2009.

The Chinese government aims to increase the number to 500,000 by 2020, planning to build the country as Asia’s largest international student destination.

Currently, there are more than 7,000 Indonesians taking various programs, ranging from language courses to academic degrees throughout China.

“But the requirement to get admitted at a university in China is very difficult, particularly in language proficiency. And you have to take certain tests such as math and science, depending on the major choice, prior to university entrance,” Sunjaya Budiman remarked. “Only those who pass with the required score are eligible to enroll for a degree program.”

Sunjaya, who studied in Jine Mei, Xia Mem from 1998 through 1999, said that studying in China was more than just pursuing an academic qualification, but also learning about culture and people.

Being the world’s oldest civilization, Chinese people adhere to their traditions and maintain the value of their rich culture. “My stay in Xia Mem was very significant in that I learned not only the language and gained academic knowledge but also learned about the people who have greatly contributed to China’s fast economic growth,” Sunjaya added.

“In my opinion, Chinese students are very diligent. They start their day early. I noticed during my stay that they woke up as early as 5 o’clock in the morning and studied by candlelight when the electricity was out. Many cities in China experienced blackouts during summer back then.”

The rich culture of China and its people add to the excitement of studying abroad. “China is growing very fast. The rapid development in big cities and the regions in China is a testament to the significant steps the country is taking in catching up with advanced countries in Europe and North America,” Syenny Halim said.

Syenny took a language program at Beijing Normal University for two semesters during 2006, and she was amazed with the city’s public transportation, especially the Mass Transit Railway (MTR).

“In addition to the MTR, you can take a bus, taxi or even rickshaw easily. The fares are low compared to those in big cities in Indonesia. Getting around the city is very convenient,” she asserted.

Truly, the lower cost of living is one of the reasons for Indonesian students to further their education in China. “Apart from the opportunity to learn about the China’s improved nation, I found a lot of excitement during my stay in Guang Zhou,” according to Mona Felicia.

Taking classes at Jinan University in 1999-2000 for Mona was more than just honing her Mandarin skills. The city offers an exciting life for Indonesian students. “I love shopping, and shopping venues in China carry a myriad of cheap items, especially fashion apparel. It’s a great shopping destination for foreign students!” she gestured excitingly, adding that, “China is where the food haven is. I miss having Shau Kau and a glass of beer at food stalls there.”

Mona, who currently leads the consumer sales department at a bank in Bandung, said that she managed to make friends with people from all over the world during her stay in Guang Zhou. “China is a melting pot and I believe is getting more diverse now.”

It does not come as a surprise, therefore, that many graduates from all over the world are hoping to work in China upon completing their studies.

Holding a degree in computer science from the University of Southern California, Hanny Kunadi had experience working in Shanghai from 2006 to 2008. At first, his only purpose was to take a Mandarin course at Shanghai Jiao Tong University (SJTU), but after a year of studying at SJTU, Hanny decided to work at a VoIP company as a web-developer and back end programmer.

“I really enjoyed working in Shanghai. My colleagues introduced me to the true essence of being a Chinese by learning some traditional culture, history. and about the most intriguing water-mouthing Chinese food,” Hanny, who is now the president director of PT ISYS, asserted.

By Aulia Rachmat Sungkar. Published in The Jakarta Post, April 13, 2010.