Daninya Zakir shares her enthusiasm for Indonesian young generation of polo players and their role in developing the sport within the country. 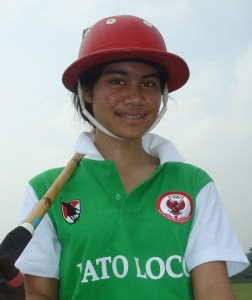 The daughter of Daya Zakir, owner of Jagorawi Golf & Country Club, says she loves everything about the sport but admits nothing can beat an adrenaline-filled chukka out in the sun, “especially when you play with good friends and quality polo ponies.”

Daninya showed her interest in polo when her grandmother, Hamida Zakir, gave her a pair of riding boots and a riding helmet. “I was eleven at the time and started swinging the polo mallet at around fourteen.” She’s now twenty and has participated at national and international tournaments, including in Thailand, Spain, France and Switzerland.

Daninya is currently in her second year of taking Biomedical Sciences at the University of Manchester, UK. Despite setting her career goal of working either with World Health Organisation or in global pharmaceutical industry, Daninya says she would keep on playing polo for as long as she possibly could.

“Last year I started the University of Manchester Polo Club with a couple of good friends, and am currently chairing its committee. We have new enthusiasts as well as some seasoned players join the club. We are now preparing for the upcoming SUPA (Schools and Universities Polo Association) Nationals in February, competing against universities from across Great Britain,” she says.

In viewing the future of polo in Indonesia, Daninya believes that today’s young generation of Indonesian polo players has the potential for not only maintaining what has been established so far, but also in further developing the sport across the archipelago.

“I am sure there are talented, determined and fun-loving youth out there who would love the game and all that it has to offer. There are already a number of talented young equestrians in Indonesia, where their horsemanship can undoubtedly give them a great start,” she concludes.