Everyone graduates from Harry Potter after the death of Voldemort including the series’ mastermind, J.K. Rowling. But she didn’t publish anything until the last Harry Potter movie is premiered. Announcing her first post-Harry Potter novel, The Casual Vacancy, back in April, Rowling said “The freedom to explore new territory is a gift that Harry’s success has brought me.” 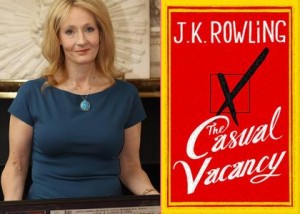 Set to be published in hardcover, e-book, audio download and CD on September 27, The Casual Vacancy’s story center around the sudden death of Barry Fairbrother which left an empty seat at the parish council of Pagford. Set in a typical English town with cobbled market square and ancient abbey, the wars happened in town makes the election a hard one.

Best known for Harry Potter, one challenge Rowling has to face with The Casual Vacancy is capturing grown-up audience. But it seems that she has all the support and help she can get. “I expect the world to be ecstatic at the range of her imaginative reach,” says her American publisher Michael Pietsch. “This book isn’t Harry Potter. It is a completely different concern.” The 512-page novel is said to be a true page-turner for adult with “the humanity, the humor, the social concerns, the intensely real characters,” adds Pietsch.

This novel also marks Rowling’s entrance to adult market, after she gradually moved from children books to young-adult stories in the seven Harry Potter books. “By the final [Harry Potter] book … she’d built in complex psychological and emotional themes and handled them adroitly, which should serve her well when catering to an adult audience,” says Edward Nawotka, editor in chief of the online journal Publishing Perspectives.

But many have high hopes about what Pagford and its villagers have to share. But she had warned everyone not to look Harry, Ron, Hermione and their Hogwarts adventure in this novel. “I think that there will be some disappointment if I don’t write another fantasy,” she once said in an interview. “But I must admit, I think I’ve done my fantasy.”

Just like the town of Pagford, this book has a lot of secrets and audiences are kept in the dark. With no advance copy available for the media, everyone has to wait curiously and judge whether the novel is as “blackly comic, thought-provoking, and constantly surprising” as the publisher claimed.