Every colour has its own heart. Even the most disliked colour can turn to a beautiful masterpiece through the power of art, according to Teguh Ostenrik.

With laid-back appearance, noted painter and sculpture Teguh shows a few of his abstract paintings in his studio. “Every colour has the beauty to contribute to the colourful world in which we all live.” 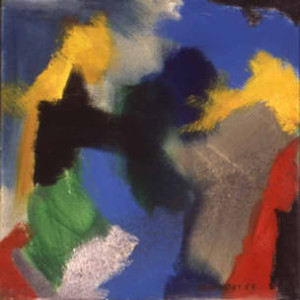 His paintings reflect his keen on playing with colours. The paintings’ translucent layers of facial expressions create the sense of moving while transforming from one facial appearance to another. Teguh has genuinely combined his talent and skills with his contemplative imagination that stems from various mood changes.

The face in his colourful abstract paintings can be portrayed as man or woman, European or Chinese, happy or sad depending on anyone’s interpretation. “Someone might recognize the face in my painting. But as you gaze, the appearance in the face could change into something else,” Teguh explains adding that abstractions can also be seen on his sculptures that portray face and body.

In general, many of Teguh’s artworks, be it paintings and sculptures, are inspired by his one-of-a-kind imagination that reflects his philosophical thoughts of living in a colourful society. He believes the ultimate truth of universe where art is truly his religion.

Pointing out at a couple of bronze statues lying on the ground, Teguh says, “They are the victim of social stigma.” 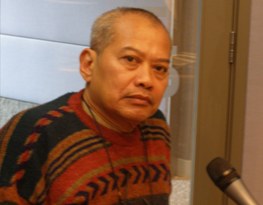 Attached to each other, the bronze statues depict two lesbians fondling each other with the lower and upper parts of their bodies being blocked with solid wood. “This gives a message that homosexual has yet to be accepted in many communities worldwide,” he adds. “I named this artwork Kama Sutra Femme, a symbol of love and affection of two lesbians who deserve to be treated equally as those heterosexuals.”

Kama Sutra Femme is one of Teguh’s masterpieces delivering messages that the character of being individual should be accepted in any society in the world. “This character includes the freedom of expressing yourself and the freedom of being whatever you want to be,” he explains. Inspired to be an artist since the age of 19, Teguh was once in the medical school in Trisakti University. He recalls his college time when he was attracted more to visual art of subjects like histology and pathology rather than memorizing the text books. “It was in 1972 when I decided to switch the gear from medical school to art; the year that I left for Germany in the pursuit of acquiring the skills and knowledge of art.” 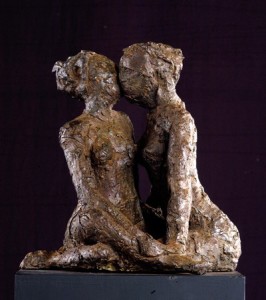 Graduated in graphic design from Lette Schüle and fine art from Hochschule der Künste, both are in West Berlin, Germany, Teguh undoubtedly learned much of necessary skills and knowledge he needed to dive in the realm of art. Nevertheless, his 16-year experience of living abroad also played a crucial role in bringing fame.

Married to Mira Tedja The owner of Bilik 3Dharma, Teguh has scored numerous solo and group exhibitions in Indonesia and abroad.

What does art mean to you?

We need ventilation to express our emotion. And art is the ventilation. An artist needs to filter his/her emotion using the right technique when making an artwork. And filtering the emotion is art. Whether it is in the form of paintings, sculptures or other related art objects, art is the language that speaks ideas, feelings and moments; all of which are expressed through emotion that reflects the character and personality of the artist producing an artwork. Through his/her artwork, an artist not only mirrors himself but also interacts with everyday’s life. 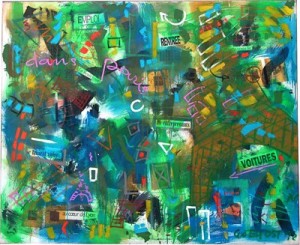 You use a unique combination of colours in your paintings. Is this a reflection of your being a colourfully open-minded person?

Probably. The blending of colours, if used with the right technique, can produce a great abstract painting. I like to play with colours. You can’t hate certain colours, as everyone of it has its uniqueness. When teaching my students, I always ask them to pick three colours they hate the most. Then, I ask them to blend the colours into a beautiful colour.

Most of your art pieces are uniquely deformed. Mind sharing about this?

A deformed piece of art is a reflection of your colourful imagination. But it requires high-skills that derive from life drawing, a very crucial step in drawing a human figure. Observing a live model of naked human as a subject helps you sketch a structural naked human form. Mastering life drawing is necessary before acquiring the skills of making a deformed artwork. Regardless of whether it is formed or deformed art piece, the art making requires an artist to utilize both the right and left brain equally. 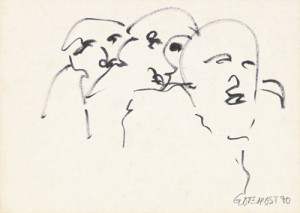 Doesn’t that the right brain play a more significant role in the art making?

That’s a wrong assumption. The left brain is potential to give birth to ideas or innovations, but both idea and innovation could not be revealed without the help of the right brain. You need a manager to make creative thoughts become visible. And the right brain is the manager.

What is your long-term vision as an artist?

Never stop experimenting and continue making more innovative art creations. Art is my life and therefore I have to make the most of it.

Any activities besides those of art?

I usually do tai chi in the morning, though once in a while I like doing it at night. And I also enjoy swimming.

How about your favourite food?

I basically like all kinds of food, particularly Japanese and Chinese cuisines. Dining out is one of my leisure activities that colours my life. I can eat at any types of eateries, from street food stall to high-end restaurant. However, I only go out for food that I can’t cook. Otherwise, I just stay home and cook my own meals.

What do you cook?

Any other outdoor activity besides dining out?

I sometimes watch movie. In any particular movie, however, I pay more attention to visualization, such as lighting and colour combinations, rather than the story flow itself.