By Christian Razukas. Originally published on The Jakarta Post.

In Ireland’s north are the castles used to film Game of Thrones. To the west are the sea and the Wild Atlantic Coast. In the east, however, a traveler finds Dublin, Kilkenny and Waterford–and a sense of living history. 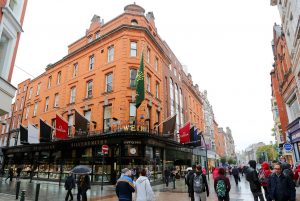 On the banks of the Nore River, notebook and pen in hand, I stood in the shadow of a 13th century castle in the city of Kilkenny. “Are ye writing some verses?” a local passer-by asked, accent and all.

Artists, authors, books and writing are a passion for the Irish. Dublin, for example, is one of a handful of UNESCO’s Cities  of Literature, and has spawned Beckett, Heaney, Shaw and Yeats–Nobel laureates all. Look at Derry Clarke’s l’Ecrivain, deemed Dublin’s finest restaurant for decades and one of the nation’s 11 Michelin-starred eateries. Paintings of five Irish writers hang above the kitchen entrance.

Meanwhile, Trevor White’s must-see The Little Museum of Dublin has a gallery dedicated to U2–the city’s hometown rockers–and thousands of pieces of ephemera donated by Dubliners, including an original copy of Ulysses. The museum overlooks St. Stephen’s Green, a gorgeous urban park where the British and Irish clashed during the 1916 Uprising, a guide says–taking breaks so the gamekeeper could feed his ducks. 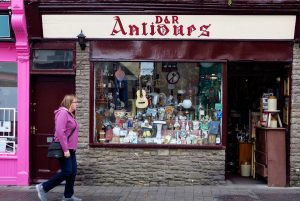 The humor (occasionally black) evinced by The Little Museum reflects the Irish fascination (occasionally an obsession) with history. Colorful doors adorn row after row of Dublin’s Georgian homes. All are well-maintained pieces of heritage, thanks to government regulation. Step away from the centuries-old remnant of Reginald Tower in Waterford–with low doorways so defenders could chop off the heads of Vikings as they entered, the pretty guide cheerfully says– and you’ll bump into the childhood home of the detective writer Raymond Chandler.

Endless stories are on display also at the Long Room at Trinity College in Dublin. The shelves of the library are impossibly high, reaching the arched ceiling two stories above, and hold books printed more than 600 years ago. Around 200,000 tomes are tucked away in alcoves fronted by marble busts of thinkers such as Shakespeare and Socrates. Downstairs is the 1,200-year-old Book of Kells, illuminated with blues extracted from the woad plant, lamp black, gypsum and iron gall. 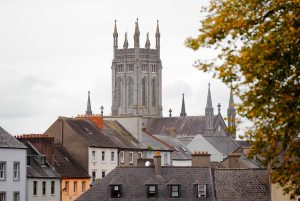 Artisanal talents are omnipresent in Ireland. About two hours from Dublin by rail through fields and forests of kaleidoscopic green is Waterford, where Waterford Crystal still operates, although the firm is Finnish-owned these days. On a tour, you can see 80 master blowers and cutters shape sand into elaborate creations. Or venture down the street to The Irish Handmade Glass Company, where four Waterford veterans banded together to keep their ancient art alive.

Back in Dublin, pubs, too, are omnipresent. A good puzzle would be how to cross the city without passing a pub, James Joyce once wrote. However,an evening out is not just about a glass of an independent Irish whiskey like Teeling, the capital city’s first new distillery in more than a century. “What is worth celebrating is the unruly conversation,” says Trevor White, also the erstwhile publisher of Dubliner magazine. “What separates Dublin from other cities is a tradition of great arguments–it’s really in the pub that the Irish character emerges.”

Even one-streetlight towns spotted on country back roads have multiple pubs, all within a few meters. Worth a visit is The Left Bank in Kilkenny, a city with a dynamic nightlife that’s popular weekend getaway for those from Dublin. Set in a renovated 1870s stone building, The Left Bank was dubbed the Best Bar in Ireland for 2017.

Tourism experts at Fáilte Ireland dubbed Kilkenny the capital of Ireland’s Ancient East. The city’s “Medieval Mile”, a series of walkable cobblestoned streets full of period buildings and an eponymous museum, does not disappoint.

Kilkenny Castle was once a palace, albeit with a few Orientalist touches such as a marble Moorish Staircase, complete with Islamic-style arches, which leads to an immense gallery full of family portraits and rafters exquisitely painted with mythological scenes.

Better though is to make the walk at night, as we did–on a ghost tour. Visiting the graveyard at St. Mary’s Cathedral after dark, for example, gives the medieval architecture a romantic and brooding character, after evidence of the contemporary world dims.

We wandered through an alley to Kyteler’s Inn. Under yellow streetlamps on cobblestoned streets, the guide told us about the original proprietor–ostensibly Ireland’s first witch, although she avoided burning at the stake. Voices and music from the pub, built 693 years ago, spilled onto the street.

I thought about what was going on inside Kyteler’s–the seven centuries of revelry, whiskey and beer and people enjoying history and storytelling–and smiled.

A compilation of suggestions for travelers covering logistics, shopping, recreation in the three cities we visited in Ireland.

VISA  Indonesians visiting Ireland must get an advance visa from the embassy in Jakarta. It’s free to apply. Northern Ireland requires a separate visa.

CASH  While ATMs are plentiful in the cities we visited, call your local bank before leaving to ensure your cards, both magnetic strip and chip, will work.

BARS  Pubs and nightclub venues are ubiquitous on the cobblestoned streets of Dublin’s Temple Bar district. Avoid more rambunctious crowds and visit Luke O’Meara, voted Bushmills Best Bartender in Ireland, at his home base at The Liquor Rooms, on the outskirts of Temple Bar, for inspired tipples.

WEATHER  An umbrella is essential, as is layering your clothes. While Ireland is never very cold nor very hot, temperatures drops as the sun (frequently) dips in and out of clouds and there can be a persistent misty rain.

BREAD  Indigenous to only to Waterford and County Kilkenny in Ireland, the blaa–a type of white bread roll baked without artificial ingredients–that’s best consumed hot and is a staple of breakfast sandwiches.

OPEN SPACES  In contrast to the delightful tamed urban space of St. Stephen’s Green in Dublin, the Kilkenny Canal Walk, which begins just under Kilkenny Castle meanders through 1.7 impossibly green kilometers along the banks of the Nore River.

SHOP  Visit Grafton Street, Dublin’s famous pedestrian-friendly shopping corridor, and venture down its alleys to find artisanal leathermakers, silversmiths and even a furrier selling earmuffs. At the end of Grafton Street is Butler’s, a specialist chocolatier serving globally famed sweets. Meanwhile, the curated collections of the Kilkenny Design Center, located opposite Kilkenny Castle, feature gems such as authentic fishermen’s sweaters made from a water- resistant coarse lamb’s wool.