Many speak of economic and geopolitical doom and gloom. But the secretary general of the United Nations World Tourism Organization (UNWTO) acknowledges that the ASEAN tourism sector as the bloc has great potential to flourish. 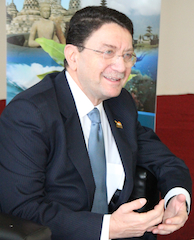 In his remarks at the opening ceremony of the 15th ASEAN Tourism Forum in Manado, North Sulawesi last January, UNWTO secretary general Taleb Rifai says that Asia’s share of international tourism by the year 2030 will grow from 20 to 30 percent. “And the good news is Southeast Asia is predicted to have one of the highest growth rates in the world.

A source from the ASEAN official website discloses the number of total tourist arrivals in ASEAN in 2010 recorded at 73,672 million. The 2011 figure has not been disclosed yet.

Rifai, who was the forum’s keynote speaker, says that ASEAN is forecasted to welcome over 120 million tourists by 2020 and almost 190 million by 2030.

Tourism to Boost the Economy

In a separate occasion, HighEnd had the opportunity to have a chat with Rifai, during which he expressed his delight with the fact that UNWTO has developed a strong relationship with ASEAN.

“Tourism sector is one great means for ASEAN countries to boost their economic growth,” he says.

To help ASEAN countries realize such a propitious potential in the tourism sector in each respective country, Rifai adds that UNWTO and ASEAN have made a series of cooperative initiatives, two of the most important ones are sustainability and travel facilitation.

People keep talking about sustainability. Indeed, the awareness level of sustainability has greatly increased on an international scale, he  remarks with his further explanation that “in the field of tourism, sustainability is translated as a means of promoting environmental protection activities, including those of the culture and the uniqueness of each country. Sustainability is high on the agenda and I’m very convinced that ASEAN countries as emerging economies will achieve better sustainable tourism.”

Next is to focus on facilitating travel more easily by improving visa regulations and entry procedure. “In order to increase the number of international visitors to ASEAN as a single and joint destinations, it is crucial that the region provide convenient facilitation for people to travel from one part of the world to another,” he advocates.

Those travelling within the ASEAN countries have the potential to contribute the growth of the tourism sector in the region as well as in the respective country. Hence, as Rifai further advises, the travel facilitation should include not only enhancing flight connectivity, but also ensuring a safe environment and increasing the quality of services.

UNWTO will put its best efforts to assist ASEAN to boost the region’s tourism industry. “This is our task for the upcoming two to three years,” he says while recalling his meeting with Indonesian President Susilo Bambang Yudhoyono.

“I met Mr. Yudhoyono last year during which Indonesia officially joined the group of countries whose leaders signed the golden book of support for worldwide travel and tourism. Likewise, I’m very excited that I have met Indonesia’s new Minister of Tourism and Creative Economy at this forum. She’s very capable lady who can be of great asset to promote tourism in Indonesia and the region,” Rifai concludes.