Witnessing her nine grandchildren grow up, Mufidah Jusuf Kalla enthuses to Aulia R. Sungkar that the children of Indonesia are in great potential to participate in today’s globalization era. 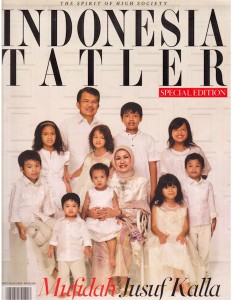 With a humble voice and friendly smile, the wife of the tenth Indonesia’s Vice President Jusuf Kalla welcomes Indonesia Tatler Bambini at her residence in Central Jakarta prime area. While introducing her nine grandchildren, Mufidah says that being around with them is an incomparable source of happiness.

Weekends are when all the nine grandchildren get together at her residence. While gesturing at some of her grandchildren playing and sharing a laugh, she says, “Childhood is the best moment in our life and therefore I keep advising my children for not spoiling such priceless time when raising their children. This is very essential in a way that the fundamental of human development can be stretched back to childhood.”

Ranged from two to thirteen years of age, the five girls and four boys have brought a delighted glow in Mufidah’s life. The gift of grandchildren is truly a blessing. After decades of raising her five children, Mufidah says that having grandchildren has contributed to her more significant value of what a life should be.

Having grandchildren seems to be universal in relation to the role of grandparent as the ancestral head of the family. However, there is qualitative difference between being a mother and being a grandmother. “The latter, as I have so far been experiencing, is less conflict than the former. Parenthood is no easy task as it is a lifetime commitment that brings a combination of pain and joy. Being a grandparent, though the role is often in the frame of part-time, is like being in love,” Mrs Kalla remarks.

She also explains how each of her grandchildren has different character in a sense that every child, regardless of his or her social and economic background, is unique and creative. In general, children possess intuitive brain and are inborn innovator. Their posture casts a unique form of dance. Their sweet voice develops beautifully musical harmony. And their energetic behaviour illuminates the light of happiness and true love, Mufidah remarks. 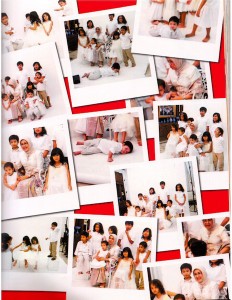 Coming from the ethnic background of Minangkabau, Mufidah was born on February 12, 1943 in Sibolga, North Sumatra. Married to Jusuf Kalla in 1967, the couple are blessed with four daughters; Muchlisah, Muswirah, Imelda and Chaerani, and a son, Solichin. More vivacious atmosphere has been cheered up the family with the presence of Mr and Mrs Jusuf Kalla’s nine grandchildren: Achmad Fikri, Mashitah (Bondeng), Jamilah Saffanah, Emir Thaqib (Mireg), Rania Hamidah, Aisha Kamilah, Sitti Syafa, Rasheed and Maliq Jibran.

“Owing to each of my grandkids different behaviour, my husband even calls them with ethnic nickname such as Bondeng for Mashitah and Mireg for Emir,” Mufidah says. Bondeng and Mireg are the Makassar words. Literally means fat, Mr Kalla calls Mashitah with the nickname Bondeng because of his cutely fat shape yet Bondeng is a very active boy. While Mireg means commander in chief.

Mufidah’s being role model as the grandmother to his grandchildren has remained with her care attention to the children of Indonesia. Despite the fact that Indonesia’s education is still behind when comparing with that of advanced countries, Mufidah expresses her gratefulness that the education awareness in the archipelago is on the rise.

Looking at how tight competitiveness has dominated the today’s era of globalization, Mufidah avers that this phenomenon has spurred Indonesian children to achieve better education. According to her, the education now is far better than in the past. In terms of languages, for instance, all schools – be it state and private – have provided students with English curriculum since the first grade of primary school. “I’m really amazed with the fact that more children can speak English well yet maintaining their proficiency in Bahasa Indonesia,” Mufidah furthers.

English has long been an international language, therefore, Mufidah always call forth the children of Indonesia inasmuch as her attention to the education of her grandchildren that learning English is a must. In line with the rising Asia, nonetheless, she believes that Bahasa Indonesia will play its important role in the future. With the boom in China’s economy, particularly, Mandarin is remarkably becoming the fastest growing language. In fact, Mandarin has turned into an important means of communication in the business realm, she says. “And I’m happy to see the enthusiasm on my grandchildren in learning Mandarin in a way that I always encourage them the importance of learning this language.”

Amazed with the fast pace of how computer and technology have taken the upmost role in everyday’s life, Mufidah has her own view in regard to the matter. “The role of technology is now an integrated part in education realm. I see that schools nowadays use computer software program as an education tool to develop students various skills such as language, math and science or even games can be very fun and educative. Nevertheless, parents should limit the time their children spend in front of computer screen due to the potential danger to the children’s sight.”

Above all, Mufidah always holds the belief that religion and moral value are the two most important aspects in education. “Inculcating in a moral value is what one should seek in learning religion. This is very crucial to face the globalization era.”

Likewise, Mufidah adds that being a mother is more than just being a parent by the title. To her, a dedicated mother is the one who is able not only to provide her kids with good education, but more importantly the mother must become a paragon of her children. In addition to instilling the important of education in line with the technology development, religion and moral value as a whole should be prioritized, Mufidah advises.

In regard to the increasing number of career mothers in the big cities nationwide, Mufidah says that owing to today’s economic hardship, the role of a career mother is of great significance in assisting the household economy. “Time management is the key here. As long as a mother can manage her time well in taking on the workload at her job without having to abandon her role as a mother, I wouldn’t see any problem with it.”

Speaking of time management, Mufidah has proved her capability in doing so. Being the chairwoman in organisations like National Handicraft Board (Dewan Kerajinan Nasional) and Indonesian Orchid Association (Persatuan Anggrek Indonesia), not to mention other activities she engages as the wife of Vice President, Mufidah has been able to manage her primary role as a housewife. Her dedication can be shown on how she is able to manage her time to cook for her husband and family, especially when her grandchildren are around.

Asked what her opinion pertaining to the presence of infant formula in the market, Mufidah says that she is neither pro nor contra concerning the issue. “The efficacious benefit from the infant products is good alternative replacement to breast milk. However, this should be consumed by babies whose mothers have problem with breast feeding. Otherwise, a baby should only consume breast milk during his or her first year.”

The modest and open-minded Mufidah adds that nutrition and healthcare are potential elements to nurture children’s growth. Notwithstanding the fact that lack of nutrition intake is potential to impede the growth of children, she is glad to see the progress on nutritional status among Indonesian children, though more efforts still need to undertake.

The increase of nutritional status should be accompanied by education awareness as the two are the powerful vehicle for Indonesian children to hit the road that will take them to the destination where they can compete with other nations in today’s globalization era, she concludes.