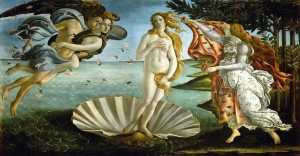 Influenced from many aspects of life, from art and politics to science and religion, artists from renaissance era did not just throw their imaginary talent onto canvas but a convincing appearance of reality. The word “renaissance” is identical with the cultural movement spanned roughly from the14th to 17th century beginning in Florence in the late Middle Ages and later spread to the rest of Europe. It is derived from a French word, literally means revival or rebirth after the everlasting war … END_OF_DOCUMENT_TOKEN_TO_BE_REPLACED