Serving Cantonese and Szechuan cuisines, Table 8 takes its guests to an exquisite experience that is wrapped with exclusive, modern and Chinoiserie. 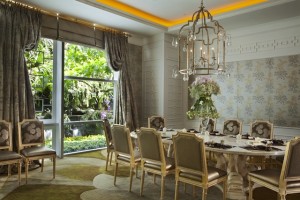 Pairing Chinese food and tea is traditionally inseparable. For that reason, the restaurant brings in tea masters to complement the new concept that reflects an authentic oriental fare.

Near the entrance stands a Chinese tea counter serving varieties of high quality tea such as black tea, green team oolong tea, flower tea and herbal tea. The tea is served in a unique way. A tea master pours hot tea from long glass container with an artistic movement as if shown by a kung fu master.

Design-wise, the restaurant offers a homey ambience in Chinoiserie theme. A series of 24 pagodas in different height are neatly displayed on a long dining table, representing the restaurant’s centre stage in the main dining area.

Exclusively designed and custom-made, the tables are draped by the sheer beauty of unique Dragon chandeliers made of thousands of chains. Having combined the oriental artefacts with modern designs, Table 8 brings a remarkable comfort of enjoying exquisite cuisines for guests with class. 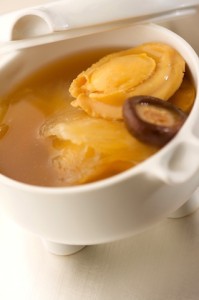 Prepared by skilful Chefs from Hong Kong and China, Table 8 offers mouth-watering delicacies of a la carte in addition to the restaurant’s seven types of exclusive menus and authentic Chinese buffet.

The restaurant’s manager Kelvin Chow says that the delicacy of Cantonese and Szechuan cuisines prepared by the Chefs is where spicy Szechuan meets Cantonese dishes.

Traditionally, the meals being served here have their own linkage between culture and tradition, which lasts for centuries. For example, Buddha Jumps Over The Wall Soup, which contains shark fins, chicken and fish belly. Not only does this dish have delightful aroma and taste but it also can enhance our stamina.

“The name is derived from an old story about monks who were meditating in a Buddha temple. Tempted by the smell of delicious soup cooked by villagers, the monks broke their concentration and jumped over the temple’s wall for the soup,” Kevin tells the old story in short.

Another story lies in Beggar’s Chicken, a dish of chicken wrapped in bread. It is one of the Table 8’s most favourites, indeed. “The story began when a beggar stole uncooked chicken from the villagers. To remove the evidence, the beggar covered his stolen chicken with clay and hid it in a safe place. Once the situation was clear, he came back for the chicken, but was surprised as he found the chicken was already cooked. Without having the second thought, he just ate the chicken,” Kevin adds.

Buddha Jumps Over The Wall Soup and Beggar’s Chicken are among the signature dishes in the restaurant’s a la carte. Others that worth the try are Braised Superior Shark’s Fin with Black Truffle and Dried Scallops served in Stone Pot. 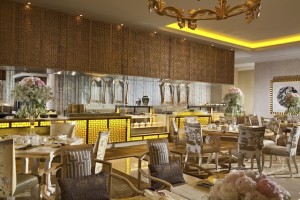 And those who are into spicy food should pick from the Szechuan menu such as Szechuan Stir-Fried Chicken Cubes with Dried Chilli and Peppercorn. From the Cantonese menu, it is recommended to try Table 8’s Fresh Steamed Bun with Choices of Fillings. And don’t leave the table without trying the delicious Wok-Fried Fragrant Rice with Foie Gras and Seafood.

The restaurant’s talented Chefs from the two regions have remarkably proved their quality of preparing the delicacy of Chinese food. Other authentic dishes such as Braised Superiors Shark’s Fin with Black Truffle, Dried Scallop Served in Stone Pot, and Scalop Cake with Asparagus and Simeji Mushroom in Ebara Sauce can also be found in the menu.

Presentation and craftsmanship of Table 8 are perfectly blended into a unique culinary concept. “Voted as the Jakarta’s best city hotel for two consecutive years, Hotel Mulia has not only strengthened the position of Table 8 in the international radar, but the hotel is without doubt a great venue for an uncompromising luxury,” Adeza Hamzah, Hotel Mulia’s assistant director of communication, asserts.

It does not come as a surprise that after only 3 months of operation, Table 8 was awarded the winner in the Fine Dining Restaurant category in the 2010 Hospitality Design (HD) Awards for Creative Achievement in New York City.