Surjawaty Tatang is optimistic that the presence of Bank ICBC Indonesia, despite its young age, has the potential to strengthen the economic corporation between Indonesia and China. 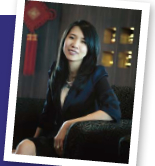 “The ongoing economic recovery has paved the way for a better banking architecture that provides direction for Indonesia’s financial industry. And banks in Indonesia are getting more lucrative,” the marketing director of Bank ICBC Indonesia remarks.

Also known by the nick name “Waty”, the down-to-earth yet determined banker furthermore says that Bank ICBC Indonesia has benefited from the revamp of national economy. “We have recorded an outstanding performance since the bank’s establishment in September 2007.” 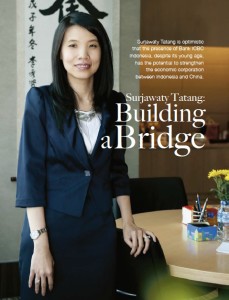 Such superb banking performance climbed Bank ICBC Indonesia to earn a victory. “We recently received an award as ‘bank with the best performance’ in the category of small private commercial bank by ABFI Perbanas Banking Award 2010,” she adds. “The accolade was based on Bank ICBC Indonesia’s performance in financial ratio and efficiency.”

Even though Bank ICBC Indonesia is relatively new, it is a subsidiary of Industrial and Commercial Bank of China (ICBC Limited), one of the world’s largest banks by assets and market capitalization. In 2009, ICBC Limited earned a staggering income of US$ 24.5 billion.

Waty joined Bank ICBC Indonesia in November 2008, and had previously worked in a number of esteemed financial institutions since she graduated from the Philippines School of Business Administration (PSBA) in Manila in 1990.

She also holds an MBA from National University of Singapore and Executive MBA from UCLA. Without doubt, her degrees are what have taken her to be a player in banking industry. But Waty admits that her work experiences play a crucial role in enhancing her banking expertise.

Her passion for banking is truly a strong foundation that keeps her climbing higher in the industry. “Especially for a new bank like ICBC, I have to put more efforts in my incumbency,” she says adding, “More efforts are not a barrier if you enjoy your work.”

Despite her professional dedication, Waty regards time off as important. Playing piano and reading are the activities she likes doing most at her leisure. “I enjoy listening to instrumental and classical music. And I also love playing the two genres on piano. I pretty much love reading various subjects, from topics ranging in lifestyle magazine to financial book. But novels of John Grisham are my most favorite reading. I have a complete collection of his books. He is a great novelist of the legal thriller genre. His stories often highlight optimistic tones of handling legal cases. ”

“Optimistic” is also the adjective that reflects her in dealing with everyday’s life. Expressing her optimism, she asserts, “Indonesia is en route to becoming one of the world’s major economic players. In fact, our country is one of the three major emerging economies along with China and India.”

Her optimistic statement is based on the fact that Indonesia is blessed with abundant natural resources. Owing to the presence of world’s big mining companies and producers of valuable commodities in the country, “It is not exaggerated, therefore, to say that Indonesia is one of the attractive destinations for foreign investors,” she avers.

Indeed, Indonesia’s economic condition is conducive to more global trade opportunities. With the improved diplomatic ties between Indonesia and China, Waty says that the trade volumes between the two countries also increase. Hence, the use of RMB currency is on the rise.

To facilitate a convenient means of trading in RMB currency, Bank ICBC Indonesia offers a series of RMB product features. “The RMB product is one way to build a financial bridge between Indonesia and China,” Waty says in confidence.