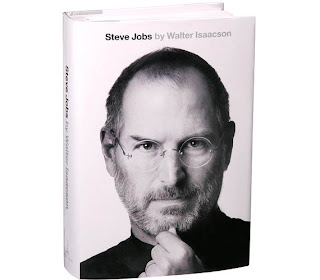 BOOK REVIEW by Aulia R. Sungkar (Ollie)
The mastermind who revolutionized personal computer, Steve Jobs once said, “Your customers don’t care about your product. They care about themselves, their hopes and ambitions.”
Indeed, Jobs had successfully helped his customers reach their dreams. He won them over with his invention that people from all corners of the world know that Apple is smart, simple and easy-to-use product.
Judging the book by its cover?
Yes, the simple cover reflects Jobs and Apple. The cover is all white with Jobs’s nice picture wearing his glasses and his favorite black turtleneck. The title is simple…Steve Jobs by Walter Isaacson.
The book can come up with a better design, but it wouldn’t be necessary, as the simple yet smart is what Apple all about. It’s the epitome of Steve Jobs as the mastermind that represents simplicity Zen.
Jobs’s fascination for Zen led him to have eastern philosophies infused into Apple’s products, starting with the Macintosh computer and ending with the iPad.
The early chapters are the most intrigued, especially when Isaacson narrates the young Jobs when he dropped out of college and started selling circuit boards. The chapters also details an irony of Jobs, being an adopted kid, who was constantly in search of how he was put up for adoption throughout his childhood.
The irony turns into a breeze when you reach the journey of Jobs, Apple and Silicon Valley. And how Jobs, the man who craved perfection, emphasized that his gadgets had to be flawless with the right models and colors.
The book also glances at some wonderful insights about Jobs’s 30th birthday party where he hired Ella Fitzgerald to sing Happy Birthday to him. That’s after his favorite singer Bob Dylan turned down the offer.
As you read through, you will find that the book is actually packed with anecdotes about Jobs’s family. One of them is his long-lost sister Mona Jobs, who was the inspiration for Homer Simpson’s mother in The Simpsons TV serial. Another interesting case is Jobs’s relationship with his four children. It was one of the common daily routines seen in Jobs’s life that he often put Apple before his family.
There is one disappointing part in the iPad story. Unlike the iPhone story that is elaborated on details, the iPad story is narrated as if the book were a rushed job. It starts from choosing an ARM processor, the story all the sudden jumps to the product launch.
All in all, the book has fascinating insights that take readers to get the feel of  Jobs…and how the genius regarded people as binary, they either got it or didn’t.
Text: The Writerpreneur. Published in 3S Newsletter, Jan-Mar 2012.