En route to becoming the first Indonesian chief operating officer (COO) of one of the largest foreign banks in Indonesia, Endy Abdurrahman has had to cope with setbacks along the way. He spoke with Aulia Rachmat.

Sitting relaxed on the verandah facing the back garden of his antique-filled residence south of Jakarta, Endy Abdurrahman smiles benignly. 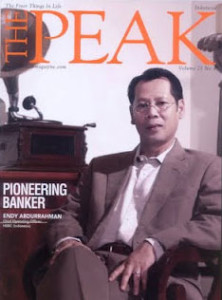 Endy, one of the longest-serving employees at HSBC Indonesia, now leads some 1,000 staff at the company in his position as COO. The bank has been his only place of work since he returned from studies in the United States in 1989.

The MBA degree in international business that he earned from Southern New Hampshire University, New Hampshire in 1989 was without doubt his entry ticket to what would become a career at HSBC (formerly The Hongkong and Shanghai Banking Corporation Limited).

However, he also earned a bachelor’s degree in mechanical engineering in 1988 from Boston University, Massachusetts. “Although I was always keen on business and economics while at college, I’d always planned to work in the oil industry,” Endy recalls.

He applied for a job in an oil company upon his return to Indonesia. At the time, there were few, if any, job openings in that field since the oil industry was going through a rough patch. The price of oil had hit a low point of US$10 per barrel – hard to believe given prices currently in excess of $120. “The industry simply wasn’t hiring new people,” he recalls.

Endy was born on Jan. 3, 1963 in Palembang, South Sumatra, where he spent his childhood and most of his school years. He married Ketsia Sihotang in 1994 and is now the father of a son and daughter, respectively Syailendra Putranatanagara, 13, and Shamira Pryanka, 11.

His father, Abdurrahman Daud Rusdi, was a government official in the Ministry of Agriculture during the regime of former president Soeharto. His parents had to move to Medan of North Sumatra when Endy was in Grade 10, only two years before he left to study in the U.S. 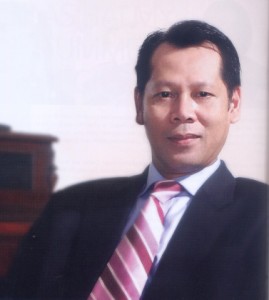 Prior to embarking on his undergraduate program at Boston University in 1984, Endy spent a year at Wilbraham & Monson Academy in Boston, Massachusetts, a boarding school that inculcated in him a strong sense of discipline, mutual respect and commitment to service.

Endy’s 18-year HSBC career has provided him plenty of opportunity to work in a wide variety of positions. “However, becoming COO was not easy. I joined HSBC in December 1989 as an executive trainee. The first job was quite a challenge. Even though I was able to digest much information in a theoretical perspective throughout my MBA program, I was lacking the experience in a sense that the job was more practical. But my second, as treasury administration manager, gave me an enlightened new perspective on where I was going to in my career.”

The early 90s were basically the time where many banking tasks were still performed manually, even though the system was already computerized. He was sent to Hong Kong for three months of training on the treasury trading system (also known as foreign exchange trading system).

“The Hong Kong office wanted me to implement the system in HSBC Indonesia,” Endy says.

As the system was implemented successfully, he was promoted to head of financial institutions, a position he held from March 1993 to January 1995.

Endy kept an eye firmly on the career road, and found himself heading HSBC’s trade services department from January 1995 to December 1997. The department’s brief was to assist exporters and importers with financing requirements, documentation, loans and so on. 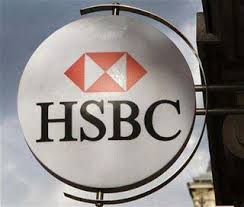 HSBC has been named the world’s most valuable banking brand, according to Banker Magazine’s annual index of 500 leading global banks. Endy says that the bank’s conservatism is both its strength and weakness.

The bank’s conservatism has made the bank very cautious in doing business, he says. “Take a look at the situation in the U.S. now where some banks are facing problems in the secondary market like mortgages. HSBC is in a much stronger position due to its conservative banking approach. “

On the other hand, HSBC tends to be very circumspect, which makes it harder for it to compete with other banks. “Some credit cards have been going in Indonesia for more than 15 years; however, HSBC entered the market only seven years ago because it took a cautious approach.

“This needs to be changed and we are slowly changing. The way I look at it, the character of banking is changing. There will be less traditional banking as more people use ATMs, the Internet and mobile banking facilities.”

Nevertheless, Endy says that HSBC has also moved into the upper layers of the financial world. He cites HSBC Premier as the bank’s latest prestigious financial product in which customers can enjoy the bank’s excellent global connections.

Within HSBC Premier, he says, the bank passes the customer’s credit history to more than 7,000 branches around the world.

“Your credit history is transferred, you can open a new account, you can be issued a new card – you can even ask for a mortgage or other banking facilities. You can do it all there in the new place.”

In December 1997, Endy was relocated to Semarang, the provincial capital of Central Java, as the branch manager. “That was the time my wife and I discovered that our son, who was then just two-and-a-half years old, had autism. This came as something of a blow. As we could not find a proper school for autistic children in Semarang, I had to let my family live in Jakarta,” Endy reminisces. 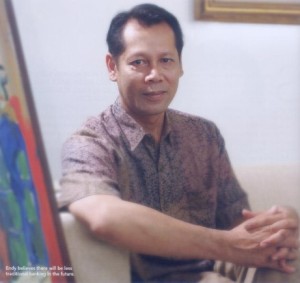 Endy and his wife have now fully come to terms with their son’s condition. “Despite the fact that many, if not most, Indonesian parents of autistic children tend not to be candid about their children condition, we are very open about sharing the issue with others.

”We both believe that children with learning difficulties like autism or dyslexia are blessed with gifts not normally possessed by other children. Even though these children often have cognitive problems such as in reading, writing and math, many have an above-average Intelligence Quotient (IQ) in verbal ability.”

As a father, Endy believes in the value of the family. “I enjoy life with my family very much. I like spending my free time bicycling with my children and sharing lots of things with my wife.” Endy also loves gardening. He has been growing himself a great variety of plants in his beautiful garden in his house.

In addition to that, he has interest in antiques. In fact, Endy grew up surrounded by these ancient artistic objects. “Both my parents like antiques and so did my grandfathers. However, I did not have interest with antiques until ten years ago.

During this Endy’s two-and-a-half-year stint as the branch manager in Semarang, he had developed his keen on antiques. “I started to appreciate the value of the ancient Javanese objects. But it didn’t go further than just a gaze as I at that time had to watch my spending.”

Endy now has an array of antiques neatly displayed in his house. During the interview, the affable man showed a variation of home decorative from antiques like lamps and ceramics to the antiques of ‘still function’ musical instrument and telephone. “I especially like Chinese ceramic antiques due to their beauty, quality of hand-made and depiction of the old-civilization.”

“I admire paintings too, but I don’t think I possess the talent. Both of my children do, though.”

Wanting to reunite with his family really buoyed him up when the head office asked him to return to Jakarta to lead HSBC’s Credit Card Department. However, after his arrival in Jakarta in the middle of 2000, the chief executive officer (CEO) changed. Instead, Endy was deployed in the post he had previously held. “I was back in trade services. From June 2000 to August 2001 was my lowest point in my career. I had to bite the bullet and put up with it.”

The hard-working Endy, nevertheless, believed that it was not the end of his career path. “When you dedicate yourself to reach a success, challenges are indeed the engine to get you there.”

The arrival of a new CEO in December 2003 brought further changes. Endy was told that HSBC Indonesia had serious problem in its human resources (HR) department and the CEO assigned Endy to head it, starting January 2004.

Impressed at the changes Endy made in HR, the company sent Endy to Malaysia in September 2006 for three months to examine HSBC’s Global Processing Centre before he was eventually made COO in February 2007, the first time that an Indonesian national had been appointed to the position.

Asked if he was interested in the ultimate prize of CEO in the future, Endy replied, “I’ve been COO for only fifteen months. I’m still on the learning curve!

“Everyone asks me whether I want to become the CEO. I say, “Why not, but it’s not really the end for me. The way I look at it is that the CEO is just one of the next steps. My long-term goal is to be appointed to the highest position possible in this organisation. It could be CEO or a senior role in another country …or be back working at head of office …you never know,” he gestures jokingly.

Published in The Peak Magazine Indonesia, July-August 2008, as a cover story.