TV personality Daniel Mananta on spreading his wings beyond MTV and Indonesian Idol and into the realm of the silver screen. 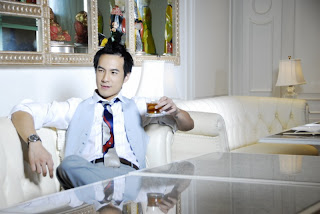 With a genial smile, Daniel Mananta energetically greets the whole crew during his photo session at Hotel Mulia, Jakarta. Taking different poses, he queries himself jokingly, “Am I acting naturally?”

Such a question is clearly in jest, especially from a guy who has experienced much success in front of the camera. It should not come as a surprise, therefore, to see Mananta score a major role in his first movie, Rumah Dara.

“I’m glad that this Indonesian thriller movie created quite a buzz internationally. We were interviewed by a reporter from Hollywood.com. Shareefa Daanish, the leading star who acted as Ms Dara, won the best actress award at the Puchon International Film Festival in South Korea,” says Mananta proudly.

Rumah Dara premiered in Indonesia in February 2010. It is titled Darah in Singapore and Macabre in other countries such as Australia, Spain, the United States and South Korea. The movie had its world premiere last October in Singapore and achieved a certain degree of success. “I was one of the major actors playing the role of Jimmy, though I had to end up as a victim,” explains Mananta.

He’s also proud that the 90-minute-long film uses sophisticated production techniques, unlike many Indonesian low-budget motion pictures. “I hope that the success of Rumah Dara will pave the way for the Indonesian film industry to go international,” he adds.

Mananta’s acting talent is likely the fruit of his previous experience playing roles in a few TV soaps, but he says that he’s not aiming to become a movie star. “Not that I don’t want to be in another flick. The reason I got into this movie was to broaden my opportunities in the entertainment world without leaving my iconic role as a presenter. Right now, my focus is on being an MTV VJ and Indonesian Idol host.”

More than just a presenter, Mananta has also started producing his own show and is in the middle of helping MTV’s production and creative team. “In fact, my boss just approved two MTV programmes I proposed,” he says proudly.

As well as his MTV roles, Mananta has been hosting Indonesian Idol since its third season. He’s now in the sixth season, which started last April and continues until August this year. He points out that Indonesian Idol is becoming even more popular. “According to ACNielsen, over 30 per cent of Indonesian TV viewers watch the programme.”

Mananta considers his role hosting Indonesian Idol to be a big honour. “I like the process of changing someone from a nobody to a superstar. The show is truly inspiring. I have witnessed the son of a hawker become a famous singer.”

Born in Jakarta, Mananta left Indonesia for Perth, Australia, in 1995 when he was in the ninth grade. Furthering his education Down Under, he eventually obtained his Bachelor of Business Administration with double majors in finance and international business from Edith Cowan University in 2002. He became an MTV VJ the following year.

Mananta’s passion for music coupled with his people skills have propelled him to his current success at MTV. He likes almost all kinds of musical genres, especially indie songs. “I adore MGMT, LMFAO, 3Oh!3, Katy Perry and John Mayer. I also love Indonesian music. Nidji and Abdul & the Coffee Theory are awesome. Listening to songs from one of the Indonesian Indie bands, The Trees and the Wild, really puts me in a jovial mood. But my all-time favourite is the Japanese band L’arc en Ciel. Their music is the bomb!” he says.

Mananta likes almost everything about Japan, from music to food and culture. A collector of Japanese comics or manga, Mananta is astonished with the infrastructure of cities in Japan. “The people are nice, but everything is very expensive there,” he says.

Another favourite holiday destination is Bali. “This island of the gods is a true paradise for me. Not only is Bali near and cheap, but the charm of this alluring island and its laid-back lifestyle make for a fun vacation.”

Perth is Mananta’s second home as he lived there for seven years. He likes the atmosphere, friendly people, the beautiful weather and the food. “Perth has a myriad of great dining venues. Ciao Italia on Mill Point Road serves the best tiramisù in the world,” he says.

Mananta is a culinary adventurer who likes to eat almost everything, except liver. “I drank snake’s blood once, even though I have a snake phobia. But never liver. The taste gives my tongue a weird buzz,” he laughs.

Also a movie buff, his favourite movies are The Matrix and The Sixth Sense. “I have a stack of DVDs in my apartment.

I pretty much watch anything, including the ones with bad reviews. Sometimes we should appreciate the bad,” he says with a grin.

Speaking of appreciation, Mananta expresses his delight that MTV and programmmes such as Indonesian Idol have led to the flourishing of Indonesian music internationally. Despite his passion for the music scene, singing is one career path you won’t find Mananta pursuing. “Too bad that I can’t sing,” he chuckles. “It takes a few glasses of beers for me in order to be able to sing confidently, yet my voice still stays off tune!”