Originally was published on jax.co.id 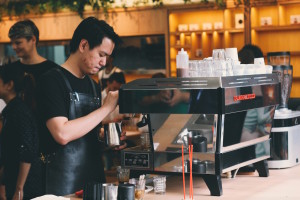 One of the kings of Melbourne coffee shops finally opens its doors in J-town.

Last year, ST. ALi sent forth its best envoys such as the world class barista Matt Perger and latte art champion Ben Morrow to introduce themselves with Indonesian crowd at Common Grounds of Citywalk Sudirman, Jakarta.

Now in partnership with the latter, ST. ALi officially enters Southeast Asia for the first time and Indonesia’s capital becomes the first of many destinations around the globe in the future. It is not a secret anymore that Jakarta’s specialty coffee aficionados have been asking for more and more with the already high in diversity coffee scene of the metropolis – from the local coffee shops that present a wide variety of Indonesian coffee beans, Starbucks as the emperor of “second-wave” coffee, to the emergence of “third-wave” proponents and to as far as Bali and owned by both natives and foreigners.

The arrival of ST. ALi as a full-fledged third-wave coffee movement in J-town will surely become a game changer and also a great motivation for local movements to further compete in the competition and to further improve Indonesian coffee beans.