With over a decade of car racing experience under her belt, Allida Alexandra Nurlutfia, popularly known as Alexandra Asmasoebrata (or Andra) is continuing to notch up more victories in a highly male-dominated sport 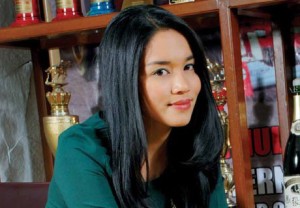 If men only were allowed to compete on the world’s fastest racing circuits, then Andra would surely be raising her voice in protest. Even though she never dreamt of putting pedal to the metal during her childhood, the youngest child of former Indonesian racer Alex Asmasoebrata seems to have been born with racing in her blood. She was still yet to reach the ripe old age of 12 when she triumphed as one of the top three finishers in a 60-litre engine go-kart championship, in which she was unsurprisingly the only female driver competing.

The now 23-year old Andra has competed in countless national and international championships, not only in the go-karting arena but also in Asian Formula Renault. While welcoming us into her office in South Jakarta prime area, this outgoing and comely speed queen shared some of her views on feminism and what it’s like to be a girl in a boy’s world with Formula JJK.

Tell us a little about yourself. Just who is Andra exactly?

Who am I?…Hmmmm….I am myself of course (laughs). You have to be proud of who you are regardless of how you define your personality.  I am a feminine lady. But I admit that there is a tomboy side on me, especially when I’m about to race. That’s where I don’t care about my hairdo, my nail polish and my makeup. I just concentrate on winning the race.

What projects are you currently involved with?

I’m currently in the middle of preparing for my departure for the ninth and tenth races in the Asian Formula Renault series, which will be held at the Shanghai Audi International Circuit in China on 21-23 October 2011. I’m really hoping to reach the first position in this international championship.

How confident are you of being able to take the chequered flag? 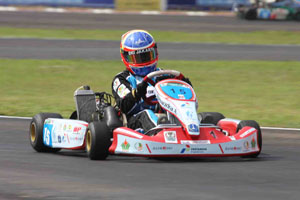 Very confident indeed. I’ve been regularly commuting between Jakarta and Zhuhai in China to put in some serious practice prior to the championship. My Renault is there and I have been putting all my effort to win this race.

And what happens if you don’t?

Failure will not make me give up. I’ll keep practicing and striving to improve and achieve more in the future. Looking on the bright side, though, I like the Zhuhai circuit as it is a faster track than Jakarta’s famous Sentul circuit. I hope that Indonesia, or at least Jakarta will one day be able to boast such a great track as this, and I’ll be ready to give it a spin!

We are crossing our fingers on that. Meanwhile, how do you define your own personal brand of feminism?

It’s entirely natural for a woman to take a good care of herself and to look after her interests. That’s the nitty-gritty of femininity. A woman should therefore be able to choose makeup and beauty products that reflect her feminist personality. As is the case with most women, I just love shopping. Plaza Indonesia is one of my favorites and is very convenient for me. It’s not too big, but it houses a broad range of products that entice most women, from clothes, to accessories and even food.

Do you play any sports besides car racing?

I head to the gym twice a week, however I find that exercising at the gym can be quite boring. That’s why I also like to get involved with equestrian sport. I have always had the passion for horse riding since I was still at primary school. Pulomas is where I usually enhance my equestrian skills.  I’m also planning to start Thai Boxing. (laughs).

Seriously? What sparked your interest in Thai Boxing?

This type of sport has the potential to enhance your physical strength and mental alertness. A lot of people believe that car racing is not a physically and mentally challenging kind of sport, however it demands plenty of physical endurance and focus. Racers’ bodies are buffeted by strong G forces, so it’s important to have strong neck and back muscles and strong hands with which to grip the steering wheel. Mental alertness and attention to detail is also important. Therefore, a dedicated racer should regularly exercise or play other sports in order to improve his or her racing performance.

What is your favourite food?

I love pasta best. I also enjoy heading down to Cork & Screw for their various delicate pastas. I don’t really eat steam rice because it tastes bland to me. However, nasi uduk or fried rice is another matter entirely! (grins).

How about your favourite travel destinations?

No city can beat Amsterdam for its beauty and friendly folks. Italy has the best pasta and cheese. I’m amazed with Hong Kong’s infrastructure…and it’s also a haven for shopping! Domestically, Lombok has beautiful sceneries, and I never seem to tire of Bali.

Who is your role model?

My father, of course. Not only was he a great racer, but he has also been a great motivator. I wouldn’t have become the person I am now without his presence and guidance. My father has had a far-reaching influence on my ambition to climb higher in my professional field as a racer.

To conclude, do you have any tips for Indonesian women who may harbour ambitions to be racers?

Don’t be afraid to try new things.  As a female racer, I have to work twice as hard as my male counterpart. Even among men, this type of sport requires a lot of commitment in order to compete at the highest level. Nevertheless, it is still possible for a female racer to achieve success. Just keep hitting the road. You have to dare to win and emember that practice makes perfect.