This is the third time Sotheby’s has offered wines direct from the cellars of Paul Jaboulet Aîné and the 60-year retrospective from 1949 to 2010 was enthusiastically received by collectors. The first public offering of Caroline Frey’s “Duo” was eagerly anticipated by bidders. This innovative, equal-parts blend of Hermitage La Chapelle and Château La Lagune (both owned by the Frey family) were snapped up by collectors with the 3 liter Jeroboam of 2007 achieving HK$11,025 / US$1,413 (Est. HK$4,000 – 6,000 / US$500 – 700). 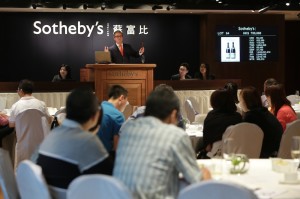 Jamie Ritchie, President, Americas & Asia, Sotheby’s Wine, comments after the sale of Only DRC – A Private Cellar of Domaine de la Romanée-Conti, “It was an exciting opportunity to be able to offer a complete sale of wines only from Domaine de la Romanée-Conti and I doubt if we will ever be able to repeat this unique sale. It came as no surprise that we saw active bidding throughout Asia and the sale was 100% sold, with demand for the very limited production of Romanée-Conti and Montrachet receiving the highest level of interest and achieving the strongest results.”

Commenting on today’s sale of Finest and Rarest Wines, Robert Sleigh, Head of Sotheby’s Wine, Asia, says, “Hermitage La Chapelle in iconic vintages such as 1961, 1978 and 1990 created enthusiastic bidding with collectors placing a premium on the pristine ex-domaine provenance. Burgundy continued its popular rise in Asia’s wine consciousness with the wines of the late Henri Jayer dominating the top lots.”