By Aulia R. Sungkar. Originally published in The Jakarta Post on February 29, 2016

Singapore Airlines’ new business class seats on its A380-800 service to London boast a contemporary design with a curvaceous shell. Coupled with the use of metallic colors and textures, each seat is sophisticatedly crafted to enhance the comfort of passengers. Flight SQ308, which took me to London, was a double-decker flight. My business class seat was on the upper deck, just ahead of economy seating. 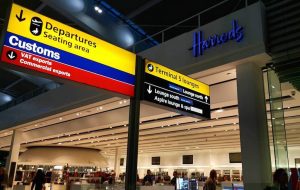 I arrived at Changi Terminal 2 at 7 a.m. for flight SQ 308 to London. I followed signs for Lounge D. It was quite a walk before I reached the business Silverkris lounge, which you can access either via elevator or escalator. Food was average, although I was too rushed to enjoy. I was happy with the lounge’s fast Internet connection. Singapore Airlines has two lounges at Changi. The other is the first class Krisflyer Gold lounge.

A flight attendant greeted me with a smile while offering to stow my carry-on. I was offered a choice of water, juice or champagne. I took champagne. It’s one thing that I like to do before taking off. What I liked more was that the flight took off on time at 9:05 a.m..

SQ308 featured a total of 55 business class seats in a 1-2-1 configuration. I was in 26F and noticed how roomy it was. Crafted in retro beige leather, the seat had a width measuring 30 inches (76.2 centimeters) and a seat pitch of 55 inches. The length of the bed was 76 inches.

The in-flight entertainment screen was large at 15.4 inches. The tray table was big for dining, but not for working on a laptop. I instead put my computer on my lap using a blanket as a base.

I also liked my in-seat AC power supply with several power outlets. I was able to charge my mobile phone and laptop at the same time.

Yes, there’s in-flight Internet service on this flight. You can surf, tweet and send text messages for US$9.99 for 10MB of volume-based service or $11.95 for an hour for time-based service. Rates vary depending on the connectivity service provider for your flight.

The lunch menu also fueled me up. I started with Singapore chicken and mutton satay as a canape, followed by goose liver on wild rice as an appetizer and North India fish curry.

The supper menu was terrific. I had seared beef fillet with madeira sauce and creamed corn. This main course was exclusively created for Singapore Airlines by Alfred Portale of Gotham Bar & Grill in New York. There was a great selection of cheese and bread, as well items from the light bites menu.

Included on the wine and champagne menu were a 2010 Vina Errazuriz La Cumbre Syrah from Valle de Aconcagua, Chile; a 2007 Taittinger Brut Millesime, Champagne from France and a 2013 Mt Nelson Sanvignon Blanc from Marlborough, New Zealand.

Service was excellent. Flight attendants seemed to know exactly what I wanted. As I tried to convert the seat into a fully flat bed, a flight attendant came quickly to help. The flat bed was convenient. I had no trouble sleeping.

We arrived on time after 13 hours and 20 minutes. I had three hours at London Heathrow before my next flight, BA 376 (British Airways), to Toulouse, France.

The seat in the business class was second to none. Coupled with good food and friendly service, this was an exquisite flight.