Published in The Peak Indonesia, July 2013.

Indonesia can – and should – host more seafaring guests, and the annual Indonesian Yacht Show is putting the archipelago on the luxury map. 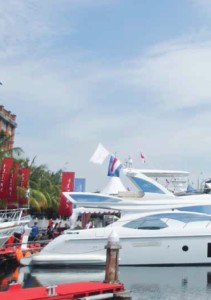 It’s a logical connection to make – with over 17,000 islands in our vast archipelago, Indonesian waters ought to be swarming with yachts from the four corners of the world. But data from the Riau islands’ department of tourism – the province shares a border with yacht haven Singapore – shows that although there are an estimated 50,000 yachts sailing in the Asia Pacific annually, only 200, or 0.4 per cent, travel into Indonesian waters.

Sure, there are regulations and safety issues to grapple with, but the fact that a yachting culture has yet to be established in Indonesia makes matters worse. There are however, signs of hope. A Presidential Decree regulating and guaranteeing safe passage for international yachts in Indonesian waters, was passed in 2011.And to better foster a yachting culture in the country, the inaugural Indonesian Yacht Show was held last month in Batavia Sunda Kelapa Marina in Jakarta.

Because this was the first boat show in Indonesia, it took two years for organisers Megawatt to survey the landscape and prep the event. The biggest challenge came from within the industry itself. “When we first started out, many were sceptical of this event,” says Gita Ang from Megawatt. “The fact that we are a relatively young company, and managed by a young CEO, didn’t really help to convince the ‘big boys’ of the industry that we were able to deliver optimal results for them. We were rejected, laughed at, and some sceptics even sent us nasty emails telling us that this event would not happen.”

Despite all of the negativity, there were, fortunately, some companies that believed in Megawatt’s pitch and eventually, they became the anchor clients for the event. Moreover, time and belief from the minority helped alleviate the situation somewhat. Says Gita: “As the show drew closer, and the industry players realised the reality that the show was happening, the tide started to turn in our favour.

“We were expecting to have only about eight boats at the in-water display, but we managed to almost double that number.” The two-day show covered 3,000 sq m of space, and brought in a total of 80 exhibitors. 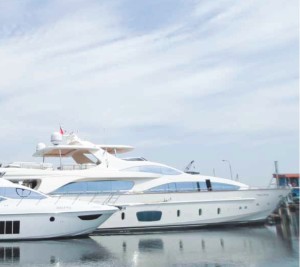 The biggest exhibitor at the Indonesian Yacht Show was Simpson Marine, a yacht brokerage company with a presence in eight countries in the Asia Pacific region. Simpson Marine showcased Azimut yachts, from smaller 53-foot models to a massive 105-foot yacht. “We have a number of yacht brands within our portfolio, but we have learned that the Indonesian market only wants the best luxury brand,” says Aileen Toh, Simpson Marine’s representative. “So that is why we only showcased our top brand, Azimut.

“Like any exhibitor in any boat show, our primary objectives were to increase the level of awareness towards Simpson Marine, promote the Azimut yachts we are offering amongst our target audience, and generate new leads.”

Although Simpson Marine has been in the Asia Pacific for three decades, the brokerage came to Indonesia just a few years ago. “The yacht industry in Indonesia is a developing market for us,” observes Toh. “Currently, it’s at the preliminary stage and with increasing wealth and number of affluent people in Indonesia, there’s definitely a lot of potential for growth.

“As the cities get more congested and if the transportation system does not improve, people in Indonesia – especially the uber-rich who can afford their own luxury yachts – will look at other means of getting away in their leisure time. This group has the option of making either a quick weekday escape, or going for a weekend getaway, to their villas on private islands.”

As the biggest exhibitor at the show and a veteran of at least 10 other shows in the region every year, Toh adds: “Simpson Marine feels that the organiser has done well for a first-time outing; the show has exceeded our expectations.”

Megawatt is already preparing next year’s event and naturally, it wants to up the ante – already, the company is expecting a 35 per cent increase in both exhibitors and visitors. Aside from people from the yachting industry, Megawatt is looking into inviting companies targeting high net worth individuals, such as jewellers, private banks, as well as luxury goods and exotic car makers, to join the event.

“We’d like to see more side events at the show,” says Toh of ideas for the sophomore outing. “Organising social events aboard the yachts, for example, will help to bring in more visitors. Sponsors could be allowed to organise events, and invite and attract people from the market that we are targeting. It has also been proven that if the organiser has done an excellent job in visitor marketing, the quality of visitors at a show will be very impressive.”