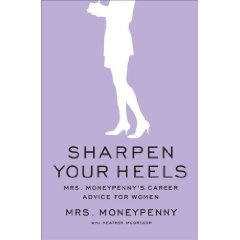 “To get to the top, women need to do everything that men do to get there – and more.” Heather McGregor, who is better known as Mrs. Moneypenny, would not say those words without the reason. Owner of a well-run headhunting business, wife and mother of three children, Mrs. Moneypenny distills her own experiences and observations, and pour them into an inspiring account.

Her recent book, Sharpen Your Heels basically elaborates on how Mrs. Moneypenny expresses her concern on career women and those engaged in business. Written in simple yet sophisticated wording, she shares with readers her views on a life of career woman.

She understands that being a woman often requires difficult tasks to perform. They can’t have it all, but they are expected to do it all – from taking care of their children and maintaining their homes, to staying late at work.In her daily life, Mrs. Moneypenny is known as a figure who religiously gives public money saving tips and career advices for women, through her roles as regular columnist in The Financial Times and as the host of Superscrimpers British television show.

“Working women always face difficult choices” is the reality statement that Mrs. Moneypenny is trying to convince the readers.  In other words, it is very difficult for a working woman to excel both at home and at work. In spite of this, the book details Mrs. Moneypenny’s secret that there are ways for a woman to achieve a big success in her career or business.

Sharpen Your Heels includes her tips, which are derived from Mrs. Moneypenny’s own experiences and observations of other successful women. The tips include building a network, learning to stop worrying about pleasing everyone,…and one tip that is worth a shot is becoming a good team player, as mentioned by Mrs. Moneypenny in the book, “Really successful women recognize that they need legions of team members on their side to succeed.”