ZurichA Asia, one of the leading stamp auction houses in the region, held the auction house on September 29, 2013 featuring rare stamps, philatelic treasures and works of art in Hong Kong.

The top-selling lot was a horizontal pair imperforate-between variety of 1885 Small Dragon 1 candarin which realized HK$920,000 (US$119,171). Establishing a new world auction record, the pair boasts the brightest color and features fresh mint with much original gum. It is said that only two pairs of this rarity have been recorded.

Another rarity is a yellow green block of 1897 Dowager redrawn printing 2 cents on 2 candarins of four imperforate vertically variety with mint original gum. Fetching HK$690,000 (US$89,378), the block of four stamps set a new world auction record. It is known that only about ten remaining pairs of this variety survive and the present lot is the only block of four stamps.

Also setting a new world auction record was a 1897 Small Figures Surcharge 2 cents on 3 candarins with double surcharge variety and mint with black ink on reverse that achieved HK$402,500 (US$52,137). Only three copies with this variety has been recorded by Zurich Asia and the present lot is believed to be the finest existing example and with the best provenance. 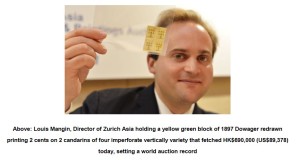