By Christian Razukas. Originally published on The Jakarta Post.

“Perpetual calendar complication?” he asks. “Been there, done that.”

Sure, as the President and CEO of Time International, Irwan says that he has a slew of complicated diver and pilot watches. They capture a sense of bravery that he admires.

But the 55-year-old says that he’d actually prefer a simple GMT watch, with an extra hand for a second time zone, given the many hours he spends traveling for his 29-year-old firm, which distributes 60 international luxury timepieces and fashion labels in Indonesia.

“Luxury is one thing–but being aspirational is another,” Irwan says about his taste in timepieces. “Aspirational is about being honest about what you’re wearing.“

Luxury is one thing–but being aspirational is another,” Irwan says about his taste in timepieces. “Aspirational is about being honest about what you’re wearing.”

Honesty – and service – are Irwan’s passionate watchwords. He realized this decades ago, after his first foray in watches, as wholesaler and servicer, working with his cousin and three others out of a 50-square- meter office in Menteng, Central Jakarta.

“I started the business because I was badly serviced by a watch dealer,” Irwan says. “They were selling one of the best products at that time, but without [good] service. If they could have made me happy, I would have been a customer.”

To illustrate the lesson, Irwan tells another story – about a woman who returned a just-purchased luxury handbag due to loose threads. The salesperson was so attentive that the annoyed customer wound up buying a second bag, for US$4,000, while the first was repaired. 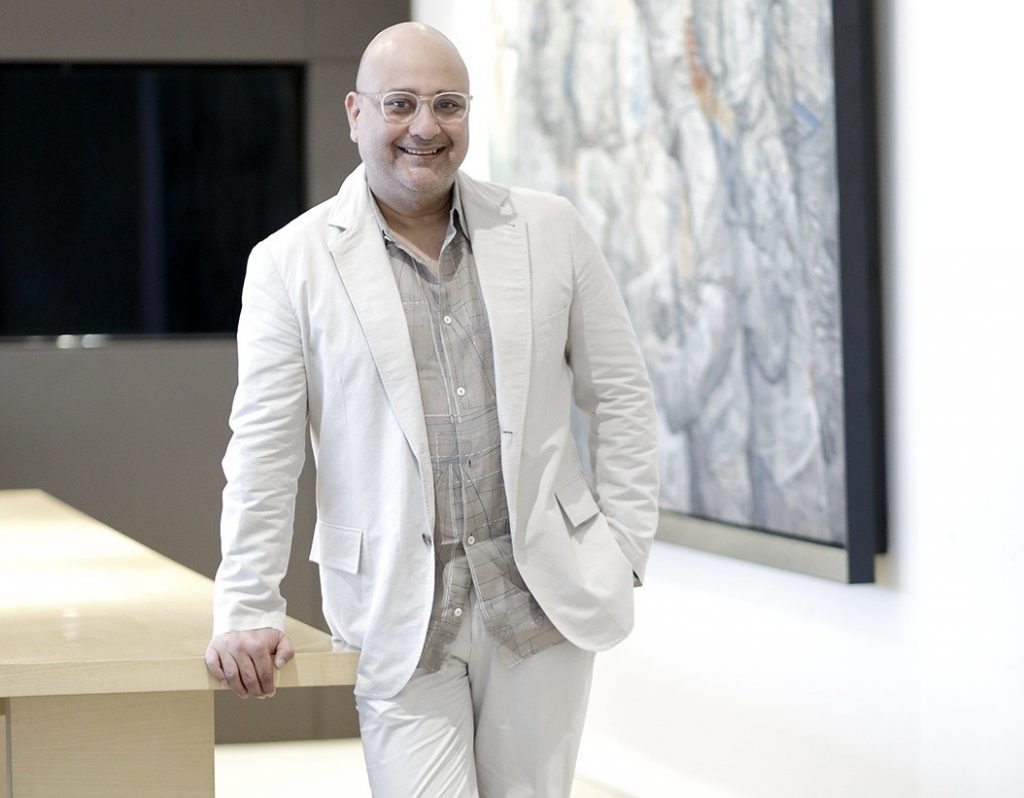 ‘It’s not about selling, but about satisfaction,’ says Irwan Danny Mussry. (J+/Dennie Ramon)

“The power of service supersedes everything else,” he says. “That is the biggest power in the business. If you can’t service your customer, that’s it. It doesn’t matter what brand or what you do.”

It’s this service ethic, as much as his trend-setting tastes, that propelled Irwan to the BoF500, a list of global fashion influencers published by the Business of Fashion, a leading industry website.

The approach works. Currently, major international brands approach Time International when planning to enter the Indonesian market. Cartier, for example, asked who was doing such a good job distributing Gucci and TAG Heuer locally, which led the luxury brand to Irwan.

Irwan is happy to talk about how much he loves looking at sales numbers at the start of each day or about trends at industry events like Baselworld.

However, he’s most happy discussing how he learns about the things that customers will really like, whether it’s watch dials made with new, high-tech finishes, extended warranties or realistic prices. “Happily,” Irwan says, “it’s not about selling, but about satisfaction.”

The pursuit of happiness is at the core of Irwan’s courting of the next generation. While conventional wisdom holds that millennials typically choose experiences over consumption, the real question, he says, is how does a brand insert itself into a young affluent traveler’s happy moments while on vacation. “They travel, and you need to be with them there at the destination. The brand needs to be there [but] it’s canoeing along with the stream, rather than navigating a new course.

Meanwhile, Time International is honing its online approach, although the real challenge is in changing mind-sets, according to Irwan. “The tech has been done. E-commerce has been done.” He’s more interested in adapting to the changed landscape coming over the next five years. More than 85 percent of Time International’s 1,400-or-so employees are millennials, he adds–a decision that keeps the firm focused on younger people.

Surprisingly, as the man who sets the tone for international luxury and fashion in Indonesia, Irwan doesn’t have a favorite shopping city. “Food is my No. 1 priority,” he says, animatedly leaping into descriptions of a “killer” meal of bubur ayam (chicken rice porridge) and rendang (stewed beef) he had in Zurich or about squeezing in visits to Tokyo’s Tsukiji fish market.

Irwan does, however, visit malls when traveling. “I love to understand what people do–especially when the store is empty,” he says. “This is where you lose your money. If I’m serving you, I’m doing my job. If I’m alone in my shop, what do I do? Do I call customers? Do I learn the product?”

On upcoming plans, Irwan says that Time International is mulling a move into the secondary market, so people can buy and sell watches from an honest broker as their tastes and pocketbooks improve.

As customers upgrade their diamonds an average of five to seven times in their lives, so can watch owners upsize their timepieces. “All this is about being honest,” Irwan says: offering the best products at the best price, along with service and respect.