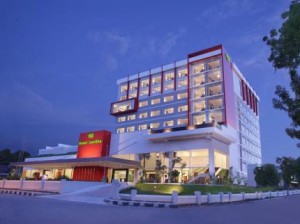 Like other Santika hotels in Indonesia’s big cities, in building and operating Hotel Santika Palu, the group combines local tradition with a touch of nature, introducing the guests to the beauty and richness of Indonesia’s nature, while embracing the hotel’s service principle: “home away from home.”

Santika Indonesia Hotels & Resorts include four-star properties listed as Hotel Santika Premiere and three-star business hotels listed as Hotel Santika. The group currently develops the Amaris brand which caters to a wider clientele base, from two-star budget hotels to luxurious villa properties. They also develop brand of unique boutique villa properties listed as The Royal Collection under the property names of The Samaya and The Kayana.

Located at Jl. Mohamad Hatta 18, Hotel Santika Palu is nestled at the heart of this capital city. The hotel is 10 minutes away from Mutiara Airport and 15 minutes away from the island’s most beautiful beaches including Talise Beach. Talise Beach is the city’s most popular tourist destination and a popular place for water sports such as surfing, wind surfing, water skiing, diving, fishing and many more. Stretching from Palu to Donggala, the beach shows picturesque view of mountains against its bay. Aside from nature, the city is also known for Palu IV Bridge, a curving bridge that connects East Palu and West Palu. The bridge which was opened in 2006 is a popular spot for locals to see sunset.

As the capital city of Central Sulawesi, Palu is growing in terms of business and tourism. The Central Statistic Agency (BPS) showed that the room occupancy in star-rated hotel in Palu reached 64, 51 percent in May. Palu is currently renovating its airport due to increasing demand from airlines to add Palu as one of its destinations and to accommodate bigger airplanes from International flights. The renovation is scheduled to complete construction in 2013.