Through his signature draping and high-octane tailoring, young designer Rusly Tjohnardi has made great strides in the global fashion realm. 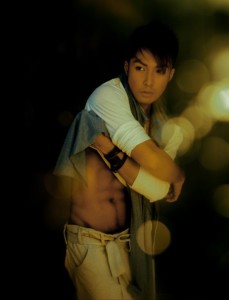 Pointing at his latest collection being staged on the catwalk during a rehearsal of his recent premier solo show, Rusly asserts that fashion is a virtual world where everything within possesses the characters of beautiful, posh, luxurious, to name a few. “And our colourful world reflects the glamorous fashion realm.”

Inherited the talent of art from his parents, Rusly understands that it is the dream of every woman to be looked beautiful. So, he combines his savvy in fashion and innovative sense of art into making high couture dresses which women have penchant for.

Born to mother who is a dressmaker and beautician, and father who likes to paint, Rusly has been surrounded with objects of art and fashion since childhood. Indeed, art and fashion are in his blood and the both are integral part in running his business.

After years of hard work, the alumnus of ESMOD fashion school Jakarta eventually opened his studio, Rusly Tjohnardi Atelier, in 2002. Bearing his name as the label, the studio’s line of business includes making haute couture dresses and bridal.

In crafting ethereal pieces into colourfully glamorous dresses, Rusly uses his feminist touch of character and personality. Coupled with his rich concept and creative ideas, the label of Rusly Tjohnardi has sparked the Indonesia’s fashion industry.

The premier solo show L’Euphorie – L’univers du Luxe 2009-2010, which took place at The Dharmawangsa on July 26, 2009, witnessed Rusly’s passion to create and explore his creativities that are inspired from the women’s world of luxury.

“Euphoria is the feeling of elation where the happiness culminates jovially,” Rusly says. Glamorousness and extravagance are Rusly’s source of inspiration to express a dialogue between fashion design and characters of those wearing his label.

Such dialogue can be well perceived when 60 haute couture dresses of his latest collection were staggeringly shown at L’Euphorie – L’univers du Luxe 2009-2010. The fabulous collection gives a new breath where the east meets the west.

Stretching back to Rusly’s journey overseas where he found luxurious fabrics to be used in his latest collection, Rusly combines both chiffon and lace with jung sarat weaving of Brunei Darussalam with the golden threaded Balinese songket adorned by rich fabrics of Thai silk, lace, organza, chiffon, damask and duchess. 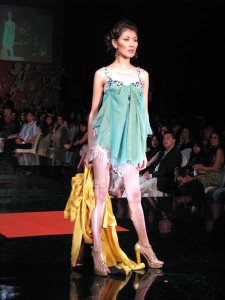 Among his collection are feminist safari motifs on silk chiffon and rich woven clothes, all of which are dedicated to women where the blend of Indonesian and European charms makes up a universal styling.

“The 2009-2010 collection is the acme of fashion illusions. Adorned by patchwork, stitching, drapery, crystal and sequin, all of my latest pieces are manifestation of my imagination and taste that are thrown into a one-of-kind blend of neo classic and modern culture, yet the characters of youth, fresh and elegance remain,” Rusly explains adding, “Such elements are vital to reflect emotion and personality of women who wears the dresses.”

L’Euphorie – L’univers du Luxe 2009-2010 is not the only Rusly’s success show. Others like Passion 2008-2009 at The Ritz Carlton, Jakarta and My Delirium Rhapsody at Senayan City are also worth of a thumbs-up. This not to mention his shows he has held in overseas like Malaysia, China, Bangkok (Thailand), Hong Kong and Singapore.

Likewise, an array of accolades have been conferred to the talented young fashion designer. Among them are Mercedes Benz Asia Fashion Award in Singapore in 2004, First rank in Indonesian International Bridal Association in 2002 and Grand Prix Award at Concours Internationale de Monaine de Paris des Junes Createur de Bijoux 2000.

For the determined fashion designer like Rusly, nothing is infeasible. To him, working with full of devotion will pave the way for an indefinite satisfaction. 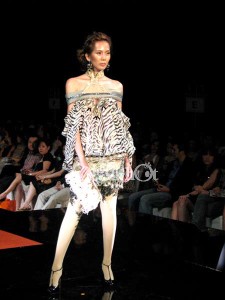 To work at best, how do you put your strategy to compete with other brands?

You got to learn from the market. And don’t ever feel satisfied with what you have achieved. There must be a seam on a perfect thing. Particularly in Indonesia, fashion has been developed since the onset of globalization era. We can see the fashion culture from other parts of the world. T-shirt is one good example. In the past, T-shirt was only worn by westerners, but it has now become in vogue across the world. We are now in a borderless fashion realm.

Can the borderless fashion realm be translated as facilitating an easier way for Indonesian fashion designers to go international?

Are you aiming to go international?

It’s a simple answer, indeed. If I’m not aiming to go international then I will not collaborate with Fashion TV for the L’Euphorie show. I’m convinced that fashion designers in general want to go international. It is everybody’s dream to grow bigger.

What is your long-term goal in terms of being a designer?

To have a strong team and bigger workshop, both of which are the most significant element toward producing and innovating higher standard designs.

I don’t have much spare time to spend at my leisure. I work very hard and when I travel, it’s usually on business; either for clients or shows. But when I have the time, I love to cook.

By Aulia R. Sungkar, published in the 5th edition of PMR Magazine, September 2009.