Text and photos by Aulia Rachmat, published in The Jakarta Post, May 14, 2006.

In the area of English language programs for children, phonics is becoming established as a basic concept to teach kids to read. A number of schools using international curriculum have adopted phonics as the fundamental approach to teaching children to read. Nevertheless, how effective is phonics as a method to teach children to read?Phonics is a method of teaching beginners to read and pronounce words properly by learning the phonetic value of letters, letter groups and syllables.

Phonics can also be defined as the relation between written letters and the spoken sounds that those letters represent. When a child understands that spoken English consists of words that can be broken down into sounds, he or she has achieved phonemic awareness. 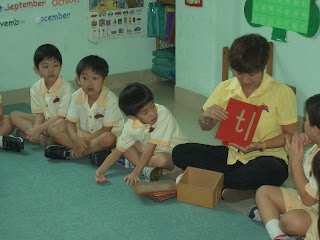 under of Montessori, created the following activities — the Sound Game, the Sandpaper Letters and the Movable Alphabet — as important steps in the development of a child’s ability to read and write.”The founder included these phonics activities as part of reading exercises in 1907, when Ms. Montessori established her first school in Rome, Italy, Casa dei Bambini (Children’s House)”, said Ellen Solaiman, National Montessori’s coordinator.

With the Sound Game activities, such as sounds by singing and visual recognition, phonics can be introduced to as early as toddler or between two-and-a-half and three years old. In this case, a child is directed toward the achievement of phonemic awareness through senses of hearing and seeing. Sounds by singing like apple…a…a…a (eh), cat…c…c…c (kuh) will teach a child to recognize the beginning sound of a word. Visual recognition helps a child to interpret pictures into spoken language. Later, as the child reaches the age of three or four, he/she is ready to study the ending sounds as well. For example, cat has the beginning sound of c (kuh) and ending sound of t (tuh). At this stage, a child is ready to learn to identify the letters of the alphabet. 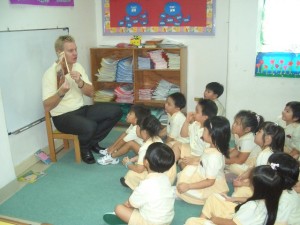 The Sandpaper Letters activity teaches a child to have both visual and tactile experience of the letter. Here, the child’s feeling of touching the sandpaper letters encourages her/him to understand how letters are written. This is the right time for a child to learn to differentiate between vowels (a,i,u,e,o) and consonants (b,c,d,f,g,h,j,k,l,m,n,p,q,r,s,t,v,w,x,y,z), where blue background represents vowels and pink background represents consonants. Next, between the ages four and five, a child should be able to absorb all sounds: beginning, middle and ending sounds. In addition, the child should know syllable, a unit of spoken language within a word. At this stage, the child is taught to make words formation through the Movable Alphabet activity.

“Movable alphabet is a creative and expressive activity as the fundamental of reading and writing”, said Flordeliza Migrino-Llorador (also known as Teacher Poy). This activity includes digraphs and consonant blend. Digraph is combinations of two letters (both vowels and consonants) producing a distinctive sound like ng, th, or, ee and sh. Examples, sing, three, for, bee and ship. Consonant blend is combinations of two consonants like cl, fr, dr and br. Examples, clown, frog, drive and brown.

“After a child has mastered all the phonetic elements, he/she should be able to combine decoding (non-sense words) and sight reading (words with meaning) into reading practice”, added Teacher Poy. Moreover, at the age of five or six, learning grammar is necessary for further reading exercises. Preposition, adjective, noun, verb and basic punctuation are essential parts in grammar exercises for children at these ages. 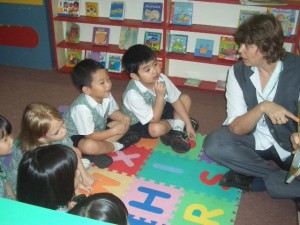 Tunas Muda, one of the renowned national-plus schools, has adopted phonics for both preschool and kindergarten levels since 1996. “It gives our students the skill to read words with less-memorization”, said Rachel Groves, Tunas’ Muda principal. In preschool, students are encouraged to learn the spoken sounds through song, and when they are ready for kindergarten level, the skill is expanded to reading and writing where they learn to put words together to make up a simple sentence. In addition, students at these levels are allowed to take the books home so they can share the story with parents while at school, the teachers are to conduct the story telling in class.

In pursuing the students’ reading skill, the school provides books from different countries divided into different colors, by which each color represents a reading skill level. It starts from “Brown Heart” where the storybook has no words. This book is designed for Kindergarten 1 where the students are encouraged to tell the story based on the pictures they look at. Next level, “Brown Circle”, is a book that has one or two words related to the pictures such as blue bird and wild cat. Moreover, during Kindergarten 2, students are expected to be able to read simple sentences phonetically.

“Having reading practice in the ‘Blue Heart’ level, many repetitions are used to help students to both guess and memorize words. For example, Tom went to school. Tom went to zoo. Tom saw Pete. They went to zoo together. Then, as the child’s ability to read has improved significantly, the story is expanded to more difficult reading represented in the yellow and green colors”, added Groves. Furthermore, as they start primary level, the reading practice is continued in red and purple colors, where junior novel and classical stories such as Oliver Twist and Tom Sawyer are introduced, respectively.

A number of phonics experts like Tony Earnshaw and Annabel Seargeant believe that phonics is an essential skill for teaching reading. Tony Earnshaw, an Australian educational psychologist who was with the Singaporean Ministry of Education working in the English teacher support area, thinks that phonics itself is not sufficient to teach a child to be literate. After conducting 20-year research with children who have learning difficulties such as dyslexia (children with reading difficulty), Earnshaw concluded that phonics plays an important role in instilling a child to learn to read and pronounce words correctly; however, it does not make a child an independent reader. There are a number of factors other than phonics that play significant roles in contributing to the outcome, such as counting words, syllables, diphthong, story telling, drama, speech and grammar.

Furthermore, the role of teachers in the learning process must be prioritized as well. Teaching children to read requires both high skill and knowledge. Generally, many children fail to learn to read because they are not taught properly. Earnshaw and Seargeant’s 20-year research indicates that a good reader possesses phonological sensitivity as he/she has achieved phonemic awareness, while a poor reader lacks this awareness.