With innovative creativity in fashion design, Douglas and Odile Benjamin have not only brought the art deco of 1920s to life, but their home-grown Singaporean Raoul brand is now en route to becoming one of the world-class fashion brand icons. 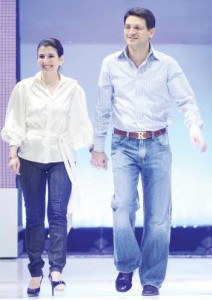 With the kindhearted smile, Douglas and Odile Benjamin express their delight of the success of their fashion label. Dressed in black with Odile wearing classy skirt, the couple looked at matching colours at Pacific Place, Jakarta.

Douglas, Chief Executive Officer of FJ Benjamin (Singapore) Pte Ltd, the company that umbrellas the Raoul brand, with his wife Odile, divisional director of licensing and product development enthuse that their latest collection will greatly contribute to the international fashion realm.

“We are confident that the Raoul brand is well-set to pamper those fashionistas who thirst for different taste of high-quality clothing,” Douglas says.
Raoul’s collection features many classy looks that channel the glamour of past decades. Having evoked the elegance of the 1920s fashion plate, Raoul has brought more black and white patterns and designs to the table.

While the men’s collection is known for its contemporary sartorial style with fine tailoring and exclusive fabrics, Odile has since last autumn come up with better design of the women’s clothing. Inspired by 19th century impressionist Claude Monet’s painting of a fall season tree, the women’s collection showcases bulouses, shirts and evening gowns in warm autumn colours of yellow, orange, ocher, plum and moss green. 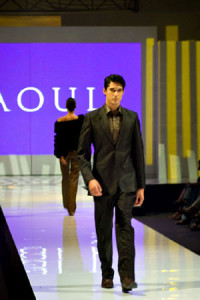 In addition to featuring stocking and lace-up boots paired with knee-length dresses, Raoul has offered more selections of lady dresses like cocoon and slim skirts along with leather skirts.

Also inspired by geometric architecture of the art deco movement, “Our sophisticated stylish plush velvet jacket, for instance, is bursting onto the scene!” the CEO of FJ Benjamin utters proudly while his wife Odile adds that, “Raoul’s leather products for men have given fashionistas a spark of our previous collections, though they don’t look too flashy.”

She cites the shoes in Raoul’s latest collection that are elegantly made of soft leather with meticulous stitching. Also, the newfangled belt is really eye-catching as its buckle is adorned with initial ‘R’ in either gold or silver.

In addition to having both collections of men and women are in the same colour palette, Raoul has put itself forefront in designs with excellent quality of the fabric and the finishing. “Particularly for the office wear, we have designed distinguish conservative side style with clean cuts,” Odile adds. 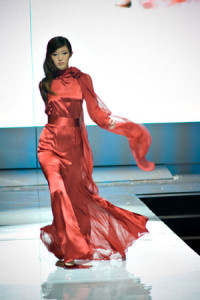 Despite Douglas and Odile’s busy days that often get them to work around the clock, family is very important for them. The 44-year-old Douglas and 36-year-old Odile always spare some time with their three children.

“Bowling, going to the cinemas and dining out are our weekend routine activities with our two daughters and a son,” says Douglas, who earned his bachelor’s degree in economics in 1989 from the University of Canterburry, England.

Asked what motivated him to have his own label, Douglas replied, “It’ stretches back to early 2000s when I bought expensive branded label shirts with less-quality in London. I was disappointed with the fact that my 200-pound shirt’s colour was faded and the buttons fell down after being washed several times. I was then aspired to have my own label and geared up for a fashion business.”

To the Benjamins, the name of a label is of great importance. “We prefer Raoul because the name sounds universal: it can be French, Spanish, Italian, South American and Indian. More importantly, Raoul is catchy word that easy to remember.” 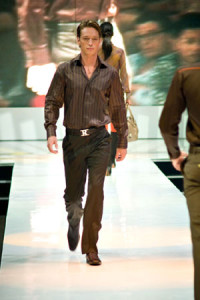 Indeed, the label of Raoul has successfully revolutionized the very functional ready to wear clothing among other world-class fashion brands. To Douglas, his wife Odile, who studied Management Science at London School of Economics, has a very significant role in running the business, particularly in the designs.

The couple has hitherto climbed the business with the label of Raoul to the top where F.J. Benjamin now is listed under Singapore Stock Exchange.

Douglas reminisces the moment where he and his wife first opened their sixty-square-meter small shop in Singapore in 2002. “Initially, we only specialized in men’s shirts including neck-tie and cufflink. It was just in a matter of months that the positive sounding of our regular customers was indeed the dawn of spreading the business.”

The Benjamins’ home-grown brand has since accelerated further with more various fashion gustoes such as those of classic ocher and royal plums.

With more sophisticated fabrics like satin and velvet with simple cuts and slight details, Raoul’s women collection was launched in Singapore in 2005. “Started with ladies shirts, we have made various types of women’s ready to wear collection from fashionable tops for the weekend to business shirt and evening gown,” Odile recalls. 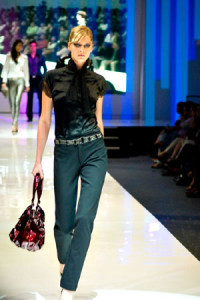 And now, the name ‘Raoul’ spreads out in more than 40 stores in Southeast Asia and Middle East with an array of collections for both men and women along with their accessories such as leather bags, shoes, belts and small leather goods.

“We are ready to spread our wings into more global market. New York, Sydney and London are our next business destination. As shirts and other ready-to-wear clothing have become fashion staple, we have customers from different walks of life; from CEO of banks and multi-national corporations to high-level professionals and even movie stars!” he gestures with excitement.

In Indonesia, there are 11 men and ladies stores in Jakarta, Bandung, and Surabaya as well as on the island of Bali.

“We currently have a small shop for men’s wear in Bali and we are doubling the size now as we are planning to expand the shop for more items of women’s wear and accessories,” Douglas furthers. “The business is growing so well on the island of the gods!”

Notwithstanding the fact that Singapore’s market is the biggest in terms of sales volume, the Benjamins says the largest Raoul store in the world is thus far Grand Indonesia. “And our collection of ladies clothing has made up about 30 per cent of the business in Indonesia,” Odile says adding that, “In big cities like Jakarta and Bandung, people are getting more fashion forward-minded, especially women.”

Nevertheless, as Douglas continues, “We are currently combining and expanding our three stores – which specialize in men’s wear, women’s wear and ladies’ accessories respectively – in the Paragon, Singapore’s upmarket mall into a 3,000-square-meter flagship, paving the way for the store to be the biggest one in the world.”