Text by Sudibyo M. Wiradji. Photos by Foued Kaddachi. Published in The Jakarta Post on June 5, 2014.

Underwater installations for an artificial reef park not only attract fish and divers but also benefit locals.

Senggigi Beach in Lombok, one of Indonesia’s emerging tourist destinations, is on its way to regaining it lost heyday as a habitat for shrimp, lobster, squid, jelly fish and other unique marine species. 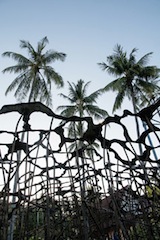 The beach lost its appeal years ago due to the destruction of coral as a result of human activities and natural aspects. But the underwater world at the beach has now started to show signs of life following the underwater installment of art structures that make up an artificial reef park, also known as “underwater art gallery”.

“Once the art installations are placed underwater and are electrified, fish will come in throngs and swarm around them,” said celebrated local artist Teguh Ostenrik at the launch of the first Artificial Reef Park Lombok at Senggigi Beach recently.

Clad in a swimsuit, the creator of the Artificial Reef Park went on to say, “My dream is how to make a serious art piece useful for others in terms of providing job opportunities.”

“The three-month long project kept Pak Haji (owner of scrap metal workshop) busy preparing the needed materials for the project, with several others engaged in cutting, drilling, welding and so forth.” 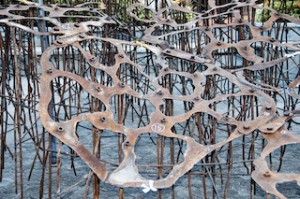 With the “ART-ificial reef park,” as Teguh calls it, he expects it to serve as a gentle ocean floor for viewing art while snorkeling and diving among the marine life.

The underwater Artificial Reef Park Lombok adds to the list of biorock reef restoration projects across the world. Two of the largest projects are in Indonesia at Pemuteran in Bali with the Karang Lestari and the Gili Islands in Lombok with the Gili Eco trust. Both Karang Lestari and Gili Eco Trust are actively engaged in restoring and conserving coral reefs.

The inauguration of the eco-friendly artificial reef park took place on the Senggigi seaside and was part of a tourist attraction, enlivening the usually quiet beach.

The crowd’s attention was focused on the remaining scrap metal sculpture as West Lombok officials, represented by local marine affairs and fisheries agency head MS Rohadi R., and Stephane Servin, head of the Lombok Hotel Association, poured coconut water onto it in turns prior to the sinking of the art pieces to the cement seafloor moorings.

Several divers, including Delphine Robbe, reef restoration specialist at Gili Eco Trust, took the art piece by diving toward a designated spot where 15 others had been anchored to the reef rubble the day before. The 7 x 9 meter-reef park weighing around 1.6 tons was connected to a low-voltage electrical current generated by a floating solar panel.

The use of the low-voltage electrical current is not without reason.

“This will cause minerals in the water to form and adhere to the sculpture,” said Robbe, a consultant for the project. “Live coral fragments are then transplanted from other reefs and because the biorock is so similar to natural coral reef material, a new garden grows, often at two or three times the rate of a natural reef.”

According to her, the electrical current is what attracts marine life. “All those artificial reefs using everything from airplanes to ships to old railroad cars have proven to be a disappointment, rusting away and polluting the sea,” she said.

“Sculptures were used in Mexico’s massive Mesoamerican Reef some years ago as an example, but all they seemed to attract were sponges and algae. The electrification is the key. And it is completely safe for swimmers and marine life.” 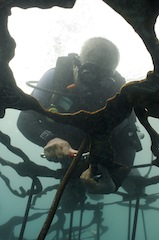 I Komang Adi Aswantara, solution engineer at Contained Energy that supplied two panels in the initial project, ensured the safety of the sculptures despite the electrification. “The electrical current at the biorocks is very low and it is safe for divers and other marine species. That’s why we use the term ‘low-voltage electrical current’,” he asserted.

The artificial reef park was a collaborative effort of the Lombok Hotel Association (LHA) and the Maritime Affairs and Fisheries Ministry, with support from Indonesia-based Gili Eco Trust.

For the 64-year-old Teguh, the project is closely linked to his diving experience and concern about the changes in the marine environment.

Back in the 1980s when he snorkeled at Senggigi Beach, the beach was known as a habitat for lobster and squid. “I dived at the reef for years for its abundance of shrimp, squid and lobster. I had not been for a few years while in Europe and when I came back, the reef was sadly a lifeless desert,” he said.

The fact inspired him to recreate Domus Sepiae – Latin for house of squid, as a form of remembrance of what Senggigi was once so well-known for. “This project allows me to play a part in revitalizing the lost coral and to do it through my art.”

Small drop in the ocean

Meanwhile, Stephane Servin, general manager of the Sentosa Resort in Senggigi and chairman of the LHA, said the project would have a positive, long-term impact on Lombok’s fast growing tourist industry.

“We can’t pick up and move our hotels when the reef dies,” he remarked. “So, obviously it’s plain common sense to do whatever possible to preserve and protect the natural features that brought visitors here to begin with. And if possible, repair and recreate them using biorock science and at the same time we bring back the livelihoods for so many who relied on a healthy reef.”

According to Servin, apart from destructive human activities, such as bomb fishing, the cause of damage to coral reefs also comes from nature itself, notably El Nino. “El Nino creates high temperature, leading to seawater becoming hot and leaving coral dead,” he pointed out.

The project is a drop in the ocean, but “it is really an integrated program in which there is win-win situation: nature, business and people”.

“With more tourists coming to Senggigi Beach thanks to the artificial reef park, locals can have a new business opportunity of accompanying visitors eager to snorkel in the water around the park.”