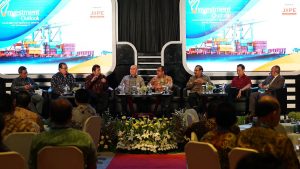 JIIPE, which is a project developed by chemical and petroleum distributor PT AKR Corporindo Tbk, in partnership with state-owned port operator PT Pelindo III, will have an 80-hectare clean-block cluster specifically designated for companies in the food and pharmaceutical sectors. The companies will run their independent utility center to reduce costs. For the first stage, 23 megawatt power plant is already functioning to support existing tenants.

“The presence of an industrial estate is a great help with its facilities that can be used. The industry is helped by the available infrastructure,” said Indonesian Food and Beverage Producers Association chairman Adhi S. Lukman in an investment outlook event co-organized by AKR in Jakarta on Tuesday. Adhi said that the benefits of being in an industrial estate like JIIPE would boost the growth of an industry that had been the subject of “huge investment interest” in recent years, recording up to Rp 60 trillion of investment realization in 2016, which is 46 percent more than in the previous year.

One of the biggest advantages, Sanny said, is the close proximity between the industrial area and port within JIIPE, which will not only reduce traffic congestion and improve the quality of life there, but also spell efficiency in the cost of logistics. Manufacturers will also see lower production costs as a result.

This, according to AKR CEO Haryanto Adikoesoemo, was one of the main objectives behind the JIIPE concept.

”Our aim, together with Pelindo III,
is to find a way to make the cost of logistics, which is one of the highest costs in Indonesia,
lower and be more competitive,”

He added that apart from the port, which is already in operation, JIIPE will also enjoy the connectivity provided by the Manyar and Legundi toll roads expected to be completed at the end of 2019, as well as a doubletrack railway to the industrial estate , which is being proposed to the government.

Like logistics, utilities are also a cost JIIPE looks to reduce for its tenants. Haryanto said that the industrial estate had an integrated waste water system and was planning to build multiple reservoirs through which wastewater and rainwater could be reused.

“Our target is to use up to 60 percent recycled water. It is hoped, therefore, that the cost of water will be lower and more environmentally friendly,” he said.

Another major savings for JIIPE tenants, Haryanto added, is the arrangement of clusters in the 1,761-hectare industrial park. Industries requiring similar production processes and raw materials are grouped together to increase energy and cost efficiency.

Haryanto added that JIIPE tenants would also benefit from the ease of doing business in the industrial zone, particularly in terms of permits, as it had been granted a direct construction investment incentive (KLIK) by the Investment Coordinating Board (BKPM) and has also received local government support for its permits. 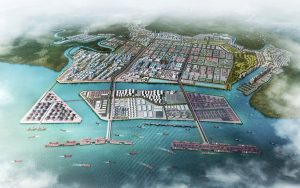 According to BKPM chairman Thomas Trikasih Lembong, incentives in the form of regulatory ease will serve as a huge appeal to potential investors. He said that the complexity of Indonesia’s regulations had put off many investors. “The number one complaint from all investors, particularly those that have invested in the country, is by far our regulations,” Thomas said.

He said that Indonesia had around 43,000 regulations from various levels of government that often overlapped and changed without notification. “Our competence in making policies is still poor,” he said.

President Joko Widodo has tried to address the problem of excessive and restrictive regulations by revoking some of them in his deregulation measures. However, their absence seems to have caused some confusion among the public and bureaucrats alike who are not used to having things unregulated.

He stressed that, from a regulator’s point of view, the government’s reach was extremely limited. Therefore, the government should not attempt to regulate every single thing, as it would achieve absolutely nothing.

“Our capacity is limited. By wanting to regulate everything, we end up regulating nothing,” he said. “Not everything needs to be regulated. Just choose those which need urgent regulating, and regulate those. In my opinion, there needs to be trust.”

Thomas praised the ease of investment provided by the government of East Java province, where JIIPE is located, which has made it Indonesia’s number one province for investment.East Java has received the most investment among the country’s provinces since 2016. In this year’s first quarter, it remained top of the overall investment list, recording Rp 78.14 trillion, a 9.1 percent increase compared to the same period last year.

East Java Governor Soekarwo explained that the feat of attracting investment was due to its investment-friendly regulations.

“The process is participatory because bureaucratic reform is determined by regulation that does not become a hindrance,” he said.

East Java’s dedication to developing the ecosystem for its industries is well acknowledged by Industry Minister Airlangga Hartarto, who praised in particular the role of the East Java governor for the impressive progress.

The minister recalled his decision to pick East Java as the first place to implement the ministry’s vocation education program, which aimed to connect the supply of talent from schools to the needs of the industry.

“We had an industry link-and-match program and the choice went to East Java. It is not without reason. When we first brought up the idea, [East Java] was the quickest to welcome it,” he said.

Other than having a bureaucracy that supports the growth of industry, the minister said East Java was also geographically blessed. The province, he said, was strategically located and served as not only an industrial hub for eastern and central Indonesia, but also for exports to other countries.

These advantages possessed by East Java will lead to further efficiencies for tenants of JIIPE.

“East Java is unique. We hope that such an integrated industrial estate can be a pilot model for other industrial zones,” Airlangga said.