By Sudibyo M. Wiradji. Published in The Jakarta Post. 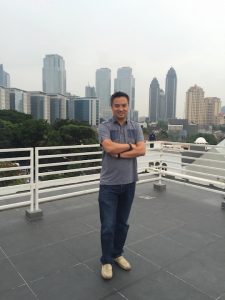 An office on the third floor of a building in Jakarta has an open-air space where people can view some of the city’s skyscrapers and also the traffic flow below. On certain days, people gather there to take a break from spending hours facing their respective laptop screens.

‘This evening we are having a barbecue party,’ said Redmer Schukken, CEO of Ice House, a multinational company that develops mobile applications.

On that evening the Ice House people, several of whom were staff from the US, got together to enjoy baked meat, corn and other foods while having an informal talk and sharing jokes and laughter. A group of young employees in one corner sang together, accompanied by a guitar.

A barbecue party is part of how Ice House, led by Schukken, builds an informal and fun working environment. In the office, next to the open-air space, there is a ping pong table and Playstation (PS) tools and devices, which employees can play during working hours. Latest gadgets from the US, such as the newest series of iPhone and Google Glass, which were not yet available in the Indonesian market, were available for testing prior to mobile application development.

According to Schukken, the company deliberately developed a free workplace because he believes that informality can stimulate creativity and innovation, which are very important in a company engaged in the business of developing applications across platforms and devices.

However, the informality comes with responsibility. ‘Everybody has a high sense of responsibility when it comes to accomplishing their jobs,’ said the 43-year-old.

Ice House has moved forward, with the number of its partner-based projects continually increasing. They include a partnership with Signature Creative and Qualcomm to build the Star Trek: Into the Darkness movie app., with Guvera developing the Guvera mobile application for Windows Phone and with Pacific Place in Jakarta installing beacons throughout the mall, enabling users to engage in a treasure hunt to find new products and gifts.

Born in Melbourne, Australia and having moved to the Netherlands at 3 years of age, Schukken, who is the son of a Dutch and Indonesian couple, fell in love with computer science in 1993 when computers were still a luxury item. Since then, he has intensely followed the development of IT.

‘IT started to be a boon in 1997 and I knew that it would change the world. Back then a PC was very expensive, but now almost everybody can afford one, either a desktop, a laptop or a mobile device,’ he said.

Schukken joined the Ice House team as CEO in early 2013 following his 15 years of experience building IT in Europe, the US and Asia, with his specialties in the field of IT implementation, business intelligence, ERP and IT security.

He is entrusted to develop Ice House Jakarta, founded in 2012, to become the number one company in building applications in Indonesia and outside. Ice House central office is in Silicon Valley in California, US. It also has established similar offices in Singapore and Australia.

According to Schukken, Indonesians have a good eye for design, one strong factor that Ice House management considered prior to establishing an office in Jakarta. ‘However, when it comes to management, Indonesians still need help, especially when related to project implementation.’

With overseas customers, mostly from the US, people of Ice House Jakarta should also be flexible in terms of working hours given the time difference. ‘The US is between 15 and 16 hours after Indonesia and so, there are those who work as early as 6 a.m. and go home earlier and some engineers come in the evening and stay until late at night,’ he said.

With the informal work place, people are expected to have the courage to convey their ideas and inputs, which, according to him, is in line with the participatory management that he adopted. ‘All share their contributions according to their respective jobs and so in this way, a success belongs to a team, not an individual person,’ he said.

Therefore, he said, teamwork plays an important part in expanding a company and in achieving a shared goal. ‘You never work by yourself in a team. With a project manager, we have daily stand-up in which team members are briefed on what they should do that day. Besides, we also have a weekly meeting to know the progress of what we have done,’ he said.

The role of good communication

Communication plays a significant part in ensuring that the project plan can be well executed and also in building a solid team. ‘We ensure that there is good communication among people from different divisions. We do it through informal events, such as barbecue parties, games, etc.’

The team is ensured to function well because in this way the result will be good. ‘I have to make sure that teamwork functions well by communicating correctly and also by making everybody feel that he or she makes a contribution. That way everybody has a sense of ownership.’

Good communication also includes transparency and clarity and so it is important to tell if something goes wrong, which will affect customers. ‘It is better to communicate the problem much earlier and fix it, which allows people to learn, rather than keeping it a secret and revealing it later, which consequently gives it the potential to get worse.’

‘If you don’t reveal the problem and solve it, then your customers will be upset and end up, for example, refusing to pay the bill. So, back then, good communication with customers is also important,’ he said.

The Ice House board office is in Silicon Valley, which, to some extent, colors the work rhythm in the Jakarta office.

‘We communicate with the office there every single day. We do it via Google Hangouts and Skype and we can share screens and cameras there. That’s why our employees must speak English, even though they are fresh, young graduates.’

As his board office is in the US, he emphasized the importance of an Internet connection as a crucial means of communication and working and ‘if the Internet is down for five seconds, everybody screams as we cannot work and that’s why we have double fiber in the office,’ he reasoned.

Schukken has 10 years experience working with SAP when he founded Hermis Consulting in Indonesia in 2002, which he grew into a major certified SAP implementation partner. And he used his previous valuable life experience to build a back-office system as one of its priority steps when he formally joined Ice House.

‘The first thing I did was create a proper accounting system before building other systems. Basically everything is around the cloud. Everything is in the system because then we can grow,’ said Schukken, who goes to the office by cycling.

I am involved in the board of the British International School, not only because my son studies there, but because I am on the boards of the business subcommittee and the HR subcommittee. Every month we have a meeting there. That’s how I get involved in education. Education is one of the most important things that we can do for a country.

I go to my office by cycling because of traffic jams. I reach my office faster by cycling compared to when I go by car. It takes me around 15 minutes to reach the office from Kemang where I live. Cycling is also a good workout. I take a shower in the office before starting to work.

Wait until kids ready to do scuba diving

Apart from cycling, I also sometimes go swimming with my family. I used to do scuba diving but I’ll have to wait until my three kids are ready to do it. Indonesia is one of the great destinations for scuba diving.

Indonesia has wide range of delicious foods. I like kambing guling (roasted goat) and soup torpedo (goat testicles) very much. But I like the ones served at sidewalks.

Place and Date of Birth

Has over 15 years of experience in building IT in Europe, the US and Asia. Currently, holds a position as CEO of Ice House (from January 2013). Previously, worked with InfoRay, a start-up from the Netherlands, set up the consulting arm of InfoRay USA, Hermis Consulting, in Indonesia in 2002. He started his career with IBM Global services.

MSc from Groningen University, the Netherlands.