Ronald Mullers is not the only thriving foreign businessman in the country. But he is one of those who want to see Indonesia becomes a much better pro-business nation. He tells Aulia Rachmat what it takes to reach a success. Born in Pekanbaru of Dutch and Sundanese ancestry and had lived there until he reached five, the American Ron is indeed the pioneer of Pizza business in Indonesia. Not only has his Papa Ron Pizza chain stores become bigger throughout the archipelago, but he was also the one who first brought Pizza Hut to the country.

“However, Pizza Hut wasn’t the first pizza business I brought to Indonesia. Together with my wife, I had opened Shakey Pizza two years before we started Pizza Hut in 1985. Both restaurants had incontestably given Indonesians an alternative of eating cheese bread. As Indonesians get used to eating cheese bread, pizza is easy for them to adapt,” Mullers recalls.

In spite of all the success he had with Pizza Hut, Mullers wanted a big change. After Managing Pizza Hut for 12 years, the business was sold. He says, “It was time for a change.”

“In 2000 the first Papa Ron outlet was open at Gelora Bung Karno, Jakarta. Operated under PT Eatertainment Tbk, a publicly traded company listed on the Surabaya stock exchange, there are now 40 outlets throughout the nation where 16 of them are in the capital of Jakarta. Out of these 40, seven are company owned stores – 6 in Jakarta and 1 in Padang of West Sumatra – while the rest are owned by franchisees,” Mullers explains.

His success story stretches back to the late 70’s. Soon after earning his degree in Hotel and Restaurant Management from the University of Hawaii, Mullers returned to Indonesia and started his career as the restaurant manager at Sari Pacific Hotel. It was such a priceless experience that had put him in track with food business. Moreover, his outgoing and diligent characters have undoubtedly made him easy to build the business networking. To Mullers, the success he has achieved, nonetheless, is not just a fruit of his working hard and building the connections. How he has dealt with and viewed all the legal issues in this country worth of a lesson.

Setting up the business is not at all easy in the very beginning. “Owing to the complication of legal procedures and red tape, PT Eatertainment Tbk has used agencies for the company’s paper works and other legal matters,” Mullers says.

“Red tape, nevertheless, is not a big problem since every country has it. The laws and legal structure such as that of police and judges are rather grim. How to get people to follow the rule of law often becomes an obstacle. The system should ensure the protection and the interest of the right….not the wrong. If foreign investors think that they have problems dealing with red tape and all the complicated procedures in handling the paper works in this country, I suggest them using the agency or/and business consultants to help. All goes very easy!” 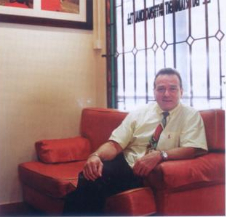 Notwithstanding many profitable benefits of investing a business in Indonesia one can gain, the legal procedures are rather bureaucratic. They are also complicated and often difficult to comprehend, particularly when it comes to the issue of business ownership.

While there are always different versions of how foreign investors play their ownership here, Mullers says that these investors deserve a fairly level playing field. “Frankly, I see that foreign investors are not really considered as national assets. Rather, they are often labeled opportunists whose stay is no more than a stopgap of making some bucks.”

As a consequence thereof, laws and services tend to focus more on protectionism and less on supporting foreign investment. Quite in contrast, in addition to the risk of losing their money, most investors need to have a long-term commitment. “Papa Ron Pizza does not get its return on investment in a short period of time. In addition to working smartly, we have to adapt to local conditions,” Mullers asserts.

Furthermore, “the advantages to Indonesia for having the foreign investments are much greater than simply cash. Not only will more job markets be put on the table, but a continuous spread of knowledge, expertise, training and quality control can truly contribute to both improvement and development of goods and services. Let’s recall the history of how those of Chinese, Arab and Indian descents have settled in Indonesia. They were once investors who with time become Indonesian citizens and have significantly given their contribution to the national economy. Likewise, not until in the early of 80’s that Indonesians could taste the flavour of pizza. Look at now, pizza has become a part of the Indonesian lifestyle!” Mullers remarks.

It is a sad fact that at today’s time when rebuilding the country’s economy is of great importance, Indonesia has lost many potential foreign investors due to the country’s poor legal system. This should come as no surprise if many foreign investors would rather set up their businesses in the competitive neighboring countries like Singapore, the Philippines, Malaysia and Thailand, Mullers says.

“If Indonesia wants to attract more foreign investments, be competitive with other Asian countries and be able to solve already high unemployment rate, the government will need to review the laws of labor, immigration and investment. To gear up for the positively bureaucratic transformation, the government needs to have a change of mindset towards being pro-business and service oriented. And more importantly, the government must ensure legal protection for the investors.”

For foreign small and medium businesspeople, the issue of setting up a business in this country is often about legal system. In order to become a pro-business nation, the government needs to have a good legal system, in which its quality service and cleanliness are coexisted, Mullers adds.

“I am not saying special privileges should be given to foreign investors, but again the issue is a level playing field. The change of mindset by the government should also ensure local investors piece of mind… to ensure that they don’t move their money to other countries or hesitate to reinvest in their businesses which is certainly the case at present.”

Published in The Peak Magazine, January 2008.