The presence of the one-year-old Dauphine Alix (Princess) has brought a meaningful life to Shirley Gouw.

Having an intense labor, Shirley was struggling in pain for 27 hours before she had emergency c section surgery in the hospital in order to have a normal delivery. But her struggle reached fruition when she eventually saw her first born, Dauphine Alix. 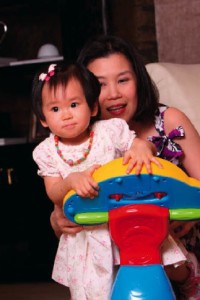 Inspired by the movie Queen Marie Antoinette of France, of which she watched it during her pregnancy, Shirley favored French name for her baby. The French word Dauphine roots from the wife of dauphin (the eldest son of the King of France), which to many, it means a queen. “To me, my Dauphine is a princess. And I have chosen the word as her nickname. It’s a noble princess,” Shirley says referring to ‘Aix’ that means ‘noble.’

Tuesday, November 6, 2007 marked a new life for Shirley. “After all that pain, I was blanketed by incomparable joy and happiness. I didn’t even let my only baby leave my sight, as she slept with me in the hospital bed during my hospital stay,” recalls Shirley, who has since 2003 been holding the post as the head of interior designers at her family business, Elite Grahacipta.

Shirley was so grateful that Medistra Hospital let her have Princess stay as a means of encouraging mother-child bonding. It is Shirley’s hope therefore to succeed in instilling her first born courage, confidence, love and faith.

As a businesswoman, her workload is surely no easy task, but Shirley is able to manage her time business-wise. Also in charge with the media relations and advertising sector of the company, Shirley works five days a week. Nevertheless, she always spares an hour to play with her little sweetheart in the morning before taking on her daily routine. “Princess enjoys sitting on my lap while I have my breakfast.”

After work, Shirley dedicates the rest of her day to keep Princess company as Shirley tries not to bring any workload home. “I undeviatingly reserve my time at home, particularly during weekends, for my family.

“I usually spend my Saturdays going to the playground and doing our grocery. Princess likes to walk around holding one apple while following me around the supermarket,” Shirley says adding that Sunday is the day the little Princess enjoys her schooling as she has been joining Gymboree class since the age of five-months.

Being the one who keeps Princess company during her class, Shirley believes that interacting to other kids is very crucial for children Princess’s age. “The best gift you can ever give to your child is a happy childhood. A child’s quality of life is the fundamental that can contribute to the child’s character building when growing up.”

As a career mother, Shirley has a nanny to perform duties associated with the care and cleaning of Princess. “Despite doing the routine of feeding and bathing her as well as other associated tasks like washing the bottle, I personally think as a parent you should be the one who teach your child the knowledge and values in life, never your nanny!” Shirley asserts.

Shirley considers herself a modern type of mother. Notwithstanding the presence of ready-to-feed infant formula as an alternative to bread feeding, Shirley affirms that all the vitamin and immunity a baby can benefit from breast milk is still an incomparable source.

Shirley gave Princess breast milk for six months. She never got sick when she had breast milk. Her keenness and depth of perception as well as her intelligence and stamina are the witness of how she has benefited from breast milk. “Having passion for her panda doll, of which she carries it around wherever she goes out; Princess started walking when she was only 10-month-old and now she can run,” Shirley amazes.