Outdoor lifestyle brand Timberland is forging ahead the Asia Pacific region with the opening of new stores.

Stewart Whitney is pointing at a pair of yellow, eight-hole boots at the Timberland’s recently-opened Bali store. “Last year we celebrated the 40th anniversary of the original boot. The model is the epitome of timeless style.” 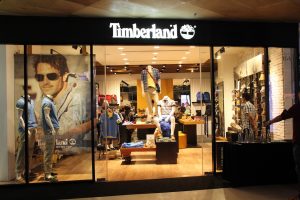 The legendary, iconic yellow boot is synonymous with the brand, which is known for its outdoor shoes. Yet, the brand also features other trendy collections, including men and women’s apparel as well as accessories.

“What sets us apart is our versatility. Our products, be it the footwear, apparel or accessories, fit for different settings and occasions. The brand’s performance characteristics include the products’ functionality and style to boot,” asserts the vice president and managing director of Timberland Asia Pacific.

Whitney was in Bali for the launch of Timberland store in Beachwalk Mall. It’s Timberland’s first concept store and second location on the Island of Gods. Following the success of the first location in Discovery Mall, Whitney says that the new store is expected to be another major boost in the business.

“Bali is an international travel destination and we see an opportunity not only to target local consumers but also foreign visitors. Just look around and see the presence of different brands here. They are emerging and growing. That makes sense for us to be here,” he remarks. 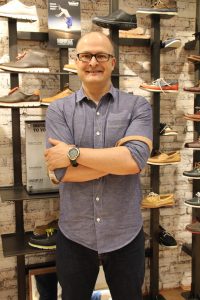 Whitney also expresses his optimism on Indonesian market. “I don’t know enough about Indonesia. But what I can tell is the emergence of middle class here creates the dynamic of the diverse country as Southeast Asia’s largest economy,” the 46-year-old American says with an avuncular smile.

He asserts that partnering with Metroxgroup has taken the business to the next level. “You can take a look at the progress that our local partner has made in terms of opening up outlets. In just less than two years, we have already opened 13 locations of concept stores and retail spaces in department stores across the country.”

Jaclyn Halim, Metroxgroup chief marketing officer, adds that since the opening of the first store in Senayan City in September 2012, the business continues reaping profits. “We are set to open three more stores this year; Central Point Medan and Grand Indonesia in October, and DFS Galleria in Bali in December.”

“We are on track with our business plan. The only other market in Asia, which is opening stores that quickly, is China. It really tells that Indonesia offers a promising business outlook,” Whitney says of the gesture. “I’m very exciting with the business opportunity here.”

The history of the company dates back to the 1950s where the founding father Nathan Swartz established the Abington Shoe Company in Massachusetts. In 1973, his son, Sidney, created its first yellow boot and changed the name of the company to Timberland. Under his leadership, Timberland later evolved into a lifestyle brand, with more product variants including clothing.

“The yellow boot was ranked as a breakthrough innovation. As far as I know, it was the first fully waterproof boot in America where working class men and women can utilize it on their job and outdoor activities. Sidney invented Timberland Men’s 50009 yellow boot. And that model, featuring a blend of ruggedness and style, is still popular today,” Whitney says while showing the same model displayed in the Bali store. 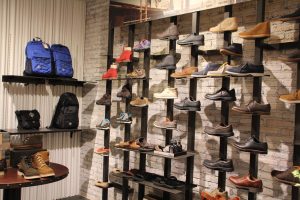 Headquartered in New Hampshire, Timberland now manufactures various models of footwear. The brand has also introduced more collections of men and women’s clothing. “We have manufacturers in various countries. Our footwear is produced in America and the Dominican Republic. We make our apparels in different markets, including in Asia,” he says.

Timberland entered its first international market in Italy in 1980, followed by other European countries such as London and France. The company has since 2000 established a presence in Asia Pacific. Whitney has managed to double the business across the region since he took the helm in 2008.

In 2011, Timberland became a wholly owned subsidiary of VF Corporation. Under this lifestyle giant, Whitney is convinced that the brand can score even better achievements. By the end of 2013, Timberland Asia Pacific had opened 175 owned retail spaces and booked 20 percent growth of Timberland’s Earthkeeper Collection and apparel business in the region.

“We go beyond just generating great products for consumers and profits for our shareholders. Another area that is near and dear to our hearts is community engagement. We recently celebrated a million hours of our worldwide community service, which we have conducted since 1992. We also started planting trees in 2001 and have reached 1 million after 10 years. We are planting more today than in the past and will hit two million trees next year,” Whitney says.

He admits that the geographic location of the company somehow enhances its commitment to environmental preservation. “Our headquarters in New Hampshire is surrounded by unbelievably green forest. Just like what Timberland literally means, a land of trees.”

The state of sustainability in business, as he continues, should also encompass doing the business in a socially responsible way. “We’ve been able to keep 128 million of PET (polyethylene terephthalate) bottles, and we recycle them to be used as non-woven materials that align in footwear.”

Whitney earned his BBA from the Central Michigan University in 1990. He later attended the Rensselaer Polytechnic University, New York and obtained a Master of Science in business administration in 1999.

He started his career with Timberland in 2000 as part of the global marketing team of Timberland PRO business, a brand of premium and durable boots designed to professional tradesman. In 2006, he took the post of vice president and general manager, during which he focused on elevating the brand status in the North American industrial and commercial markets.

Now Whitney is based in Hong Kong. At the helm of the Asia Pacific headquarters, he is responsible for all commercial operations in China, Japan, Hong Kong, Taiwan, South Korea, Singapore, Malaysia, Australia, New Zealand, India, Thailand and Indonesia.

“I have lived in Asia for about seven years; two years in Hong Kong and a year and a half in Shanghai. Before VF Corporation acquired Timberland, our headquarters was in Singapore wherein I lived there for three years. I’m telling you the vibrancy of these cities is amazing, as there are many places for fun activities and great shopping,” he asserts.

He also acknowledges Asians as being warm and friendly folks. “Their warm personalities and friendly attitudes are what make any city where I have lived in the region become a home away from home.”

Whitney loves Hong Kong for the city’s great outdoor activities. And Shanghai is where he found his true love. “I met my wife, Haiyan Chao, in Shanghai. Now we both live in Hong Kong where we like to spend our spare time going to the beach or playing golf. She’s now pregnant, so she’s not quite mobile. We’re going to have a baby soon…in September…and it’s a boy!” he exclaims happily.

Another good news is Whitney has been promoted to brand president. “I will be relocating with my wife and upcoming son to New Hampshire. I will start my new post in October. My goal for the first 100 days is really focused on working with my new team toward gaining understanding for the business, brand and organization at a global level.”

Returning to his homeland as the head of the firm and being the father of a newborn are great reasons for contentment.

and being the father to the newborn is surely an incomparable source of happiness. Whitney says that despite leaving the continent for now, Asia will always hold a special place in his heart, including his brief trip to Bali.

“Why shouldn’t I? The island’s charming people, beautiful culture and flawless oceanic panorama are truly second to none,” he replies quickly when asked if he will make a return visit to the island.