Indonesia’s economic indicators have been unimpressive with the depreciation of the rupiah by more than 14 percent since the third quarter 2008.

The Jakarta Composite Index in October fell to 1,355 points whilst inflation soared to around 11 percent by end of December. 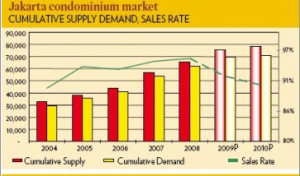 The excellent performance of Indonesia’s exports has buoyed Indonesia’s economic growth to remain steady at 6.2 percent from a year earlier, well within the government’s target.

With the deepening global financial crisis it is anticipated most property sectors will be impacted despite the government’s actions to prevent this.

The strong take up was contributed mainly from newly launched projects with prices between Rp 200 – Rp 500 million per unit, within CBD locations, with good access to major public transportation, and investment motivated buyers.

The high mortgage rate and tighter competition created negative sales in some projects located in the West, CBD and South Jakarta.

A slight decline in the rental apartment occupancy rate to 69.7 percent was also recorded in the previous quarter. 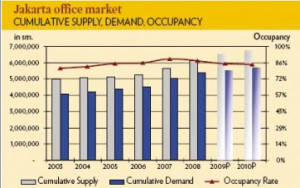 Service apartments is the only sub sector that actually reached higher occupancy levels compared to the same quarter in 2007.

High annual demand during 2008 was contributed by the absorption of major tenants in newly completed buildings.

Retail development is expected to slow and careful planning considerations will be critical to success in this sector.

Industrial market investors have adopted a wait and see stance however, some foreign investors and local investor are still active in seeking small industrial land and standard factory buildings (SFBs).

The condominium market performance is predicted to slow in 2009.

Property developers and buyers will carefully consider their investment decisions due to high interest rates and tighter loan approvals.

The sales rate of existing condominiums will remain stable at around 95 percent, and average pre-sales rate of proposed new supply has reached almost 70 percent.

Developers will start to offer flexible payment terms, such as longer installment/balloon payment terms, resizing their units, and offering special packages such as rental guarantees.

It is believed that a more flexible foreign property ownership regulation will be a good stimulator to push the condominium market.

Office future supply by end of 2010 will dominate the Kuningan and Thamrin areas and South Jakarta.

Occupancy levels in 2009 and 2010 are predicted to hover at 84.0 percent – 86.0 percent, due to the high new supply to be completed with lower current pre-commitment level achieved.

Office leasing activity is expected from relocations for rental efficiency, subleasing activities, space downsizing and surrendering of leased spaces. Further pressure in gross rental will be a challenge for landlords, although the effect of high inflation rates during 2008 has created higher operational costs.

The retail sector will face tighter competition with more pressure on rental and occupancy rates, and nine new projects opening in 2009.

Occupancy rate of Jakarta retail centers is predicted to remain stable at around 77 percent over the next two years.

Limited new supply in the Debotabek area until 2010 will slightly increase the overall occupancy rate to 75 percent.

Pressure on rental rates is expected to continue due to the lower economic growth projections, lower consumer spending and high competition. Further decreases in fuel prices will help reduce pressure on operational costs.

Published in The Jakarta Post on January 30, 2009. By Utami Prastiana, an associate director at Procon Indah.