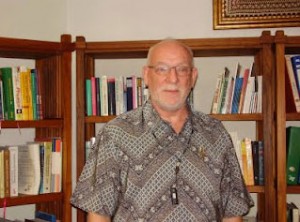 The abundant natural resources at Indonesia’s disposal need better qualified human resources to ensure maximized utilization for the benefit of the nation and its people as a whole. Unfortunately, the rigidity of Indonesia’s education system, its infamous rote learning system, has helped little in developing the future generations.

Indonesian school-aged children need a proper education and the government should promote the importance of education.

It is the right time for Indonesia to start developing its young by driving a change in its educational system.

To learn more about the education system that fits Indonesians, The Point spoke to Prof. Dr. Peter Pscheid, the founding rector of the Swiss German University in Tangerang.

Q: Why do you think that the curriculum needs a change?
A: The national curriculum is rigid to me. And I believe the Education Ministry should find a better way of creating a more flexible curriculum. Much of the nationally implemented curriculum is a memory-driven approach. This is not a bad curriculum, but the solving problem approach is more appropriate for the students’ future to strive in today’s competitive environment. The international curriculum used in European countries has long abandoned the memory-driven approach. Rather, it combines both theoretical and practical training like internship. Internship should be included in the semester’s study for every student. This can be a role model for Indonesia, but the country does not need to follow the same pattern. But, the government should consider a change for ‘a proper education’.

Q: What is the standard of ‘a proper education’ for a country like Indonesia?
A: I don’t have the authority to say as I’m the guest here. But it would be a good idea if Indonesia could have an education improvement starting from raising the salaries of state teachers. You cannot survive living in European countries earning US$100 per month, and even in Indonesia such an amount will not suffice, particularly those who are married with children. The salary increase can be a tool to motivate them in delivering knowledge better. However, this is not going to help unless there is an awareness of the importance of education in the communities.

Q: How can such awareness be ingrained in the public?
A: It is not as easy as flipping a coin. But let’s put it this way, you have abundant natural resources. Due to a lack of professionals, many foreign companies have taken opportunities to utilize your country’s resources, such as oil and gas. The reason why the Indonesian government has utilized the foreign companies is due to their experience and efficient work. In my opinion, Indonesians, having a big population, should be able to gradually exploit their resources by themselves, despite some obstacles. And do you want to know what the biggest obstacles are?

Q: Sure, what are they? Education?
A: Yes, and economic and political instability as well. On the top of that, lunch is not free.

Q: What do you mean by that?
A: Education is not cheap in this country. Nor is it easy to change a nation’s vision toward the importance of education. In the old days, many people did not seem to have problems. They wore simple dresses, they didn’t need to buy luxurious things like cars and computers, and they ate from what they had planted. The presence of today’s technology has gradually swept away such a stagnant conservative lifestyle, leading to today’s global competitiveness. Technology has become a door to reach success. And when you talk about technology, the role of education cannot be avoided.

Q: Can you please elaborate?
A: Indonesia can produce one of the best cars, the Kijang. Why can’t the government enhance the country’s human resources? Experience is the best teacher, and learning from more experienced people will not only give benefits to the learners but also enrich those delivering the knowledge. Thus, a university needs to have a melting pot team. Singapore is a good example, where they employ many university lecturers from different countries. I see such a condition in the international universities here, but not in the state and other private universities.

Born on March 23, 1943, in Basle, Switzerland, the father of two children studied physics at the universities of Zurich (Switzerland) and Constance (Germany). He earned his doctoral degree in Science at the University of St. Gallen in Switzerland. He was rector of the Institute of Technology in St. Gallen from 1982-2000. He has been rector of the Swiss German University since 2000.