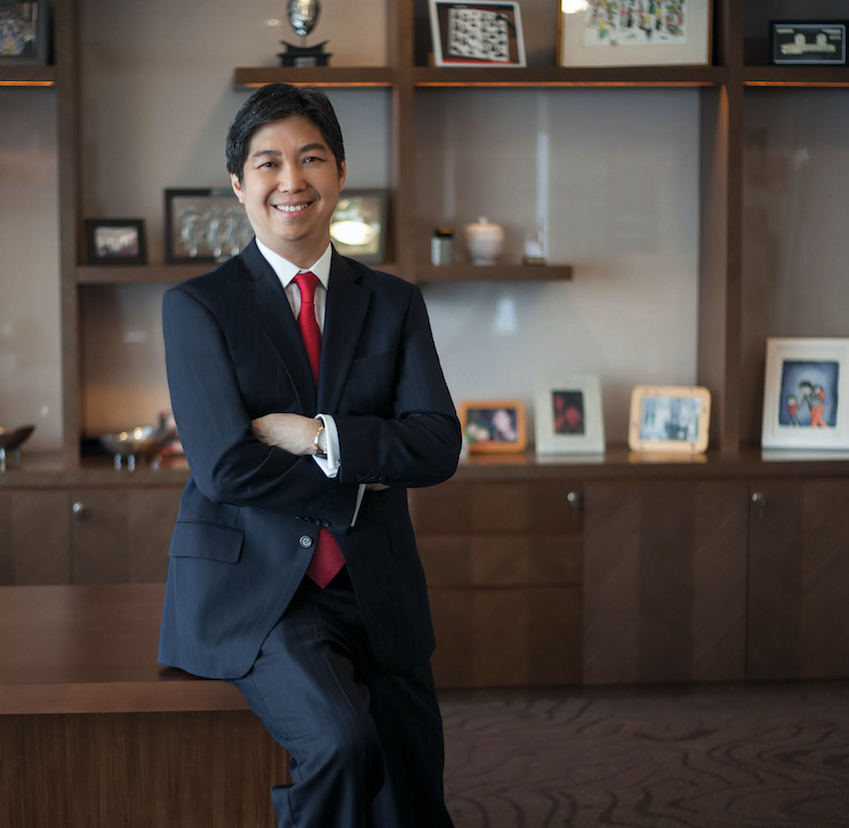 Paulus Sutisna, president director of Bank DBS Indonesia, steps into his office in a sleek suit and an avuncular smile, as he greets Registry Indonesia team during a photo shoot. The office has a vibrant atmosphere that reflects the dynamic of leaders and employees interaction.

As a banker and business leader, Paulus recalls what it takes to climb him to the top position in his career. Started as a Citibank management trainee back in 1989, he then assumed the role of deputy credit administration head which allowed him to learn more about the bank’s organisation structure and policy. He moved to risk management and after two years, to marketing where he stayed for another few years and eventually became a team leader. Later, the 1997 economic crisis hit.

“It apparently provides the best, yet most expensive training, for me and bankers in general. In time of crisis, we’re able to prove all the risk management theories. It’s also expensive because of the incredible impact to Indonesian economy,” he recalls.

Paulus, who graduated from University of Technology Sydney, Australia, entered global banking when Citibank sent him to Amsterdam and returned to Indonesia to lead the Global Transaction Services (GTS) business. He then moved to HSBC before finally landing the leader position at DBS Indonesia in 2015.

“When I first joined DBS in 2015, I had to build a team because it was incomplete. For me, people are the most important asset of the bank, because even if we’re extraordinary and willing to work for 24 hours, we only have two hands. What can we do? But if we have a good team and solid teamwork, then we’ll have effective result.”

Last year, the team showed a favourable achievement. “Our revenue increased 55 percent compared to the previous year and it’s not just about the numbers. We also received several awards in best employer category, including the one as the Best Performer award from DBS Group. This is because we’re concerned with the human resources, returning to the philosophy that people is the most important asset for the bank.”

In leading the company, Paulus, who admires President Joko “Jokowi” Widodo, focuses on the employee journey because managing people isn’t just about providing technical guidance. “It’s how we treat them and the benefit we offer, we always try to create a joyful employee journey. As we care about our employee, we also care about our customers’ journey.”

As DBS focuses on its employee, it starts to grow. Unlike other global banks, DBS isn’t a corporate giant, but the size, according to Paulus, is also its strength. Quoting the group CEO, Piyush Gupta, Paulus explains that DBS has a good financial muscle with just the right company size that enables the bank to be agile, quick and financially strong. Other banks may win in size but they are many challenges in other parts of the world like the U.S. and U.K. “While in DBS, we focus to grow. Indonesia is a focus country, we walk the talk, we invest and hire more people.”

He dreamt to make DBS a top brand and with the solid team, it’s doable. Is that considered a success “Success is different for each person. Some would say being rich is success, while others are satisfied as a manager. It’s hard to measure success. So I think, the best is to know what you want to do in life. It’s good to have ambition, as long as you’re not breaking the rules. Know your limit. I’ve never set a target to be a CEO. Personally, I only go where life takes me and I keep on learning while staying curious about things.”

Curiosity is important because you will find the reason behind everything. For example when there is a banking policy, it’s good to know why and what’s behind the policy instead of just accepting and implementing it well into everyday work. Therefore, we can do necessary improvisation. “I always try to find challenges because life is more fun with them. Don’t be afraid of challenges and stay curious,” he advises.

Curiousity is also what keeps DBS in line with the current development in banking industry. Actively finding out what’s happening and adapting to the change. “As a bank, function is always there because people will always need a bank, but we have to stay agile with the change and become the leader in the future by evolving and collaborating.”

As a busy person, Paulus tries his best not to bring his work home. He would rather stay late and finish everything at the office. “Everything has to be balanced, not literally, but you have to set priority. Work will always be there, but what’s important is know what you should do first,” he explains, adding that his co-workers never see him bringing paperwork home.

When he’s not managing people or overseeing the DBS Bank’s operations, Paulus rides his bike around. “I grew up in Bandung and when I was young, I rode my bike to school. It was in the 1970s and Bandung was still cold,” he reminisces. “Cycling is also the safest exercise because at my age, my knees won’t hold up with running. We can also escape far away from our routine on our bike, as we spend five days a week in an air-conditioned room. Biking helps us venture into the outdoor.”

His hobby has also brought in networks. If he usually rides around his house in Bintaro at weekends, starting as early as 6 a.m., with friends. He sometimes ride in other destinations outside Jakarta, like in Padang or Bali. “It’s useful for networking. We can be healthy together while travelling. You can meet new people and today, many companies started to have bike tournaments.”

But the place he would love to visit isn’t reachable by bike. Amsterdam is his favourite because he once lived there. It’s just like his second home. When he was there, Paulus and his wife had to learn to do everything by themselves. Moving abroad with two young children, aged 3 and 7 respectively, wasn’t easy, especially when it comes to school and education. There was a lot of adjustment they had to make.

“Yet, my life in Amsterdam is memorable because “my experiences there taught me many things about adaptation. We have a lot of exciting stories that made us miss Amsterdam,” he says concluding the interview.