Competition is what has led to the pursuit of academic degrees from overseas. It is not just the English language that has gone international, but a much broader range of studies offering huge opportunities have attracted students worldwide, including those from Indonesia.

However, distance is often an obstacle for Indonesians seeking an overseas study opportunity and many say that study in Singapore and Australia is a good choice.

In addition to being a world-class shopping hub and tourist hot spot, Singapore has for years built a reputation as a haven for foreign students owing to the country’s outstanding reputation of higher education.

In addition to using English as its first language, Singapore is indeed a melting pot that makes up the various ethnic groups of Chinese, Malay, Indian and Eurasian. Being one of the world’s cleanest and safest countries, Singapore has drawn a large number of expatriates and foreign students from all over the world.

Established in 1964, SIM Global Education has partnered with a number of world-class universities, such as the University of London and RMIT University, offering more than 50 academic programs in business management, accounting, finance, economics, communication, psychology, to name a few.

As the largest and one of the oldest private institutions in Singapore, SIM GE also offers at its Singapore campus graduate programs in single degree, double major and double degree courses from the University of Buffalo and the State University of New York, US.

The programs at SIM GE are indeed the same as those taught at the two American universities in terms of curricula, methods, admission norms and degree requirements.

“We offer degree programs from the University of Buffalo, NY that have been hugely popular among Southeast Asian students. While these courses conform to the same norms as those followed in New York, the SIM campus offers closer proximity to home, increased student safety and security besides vast savings in study-related costs,” Lee Kwok Cheong, CEO of SIM GE, asserted.

Over 18,000 students from 40 countries worldwide are currently enrolled at SIM GE. The school also awards dozens of scholarships each year to deserving new and existing students.

With increasing globalization, Australia has become more of a melting pot than in the past. Likewise, the increased number of immigrants going to the country has made the nation an attractive study destination for foreign students. 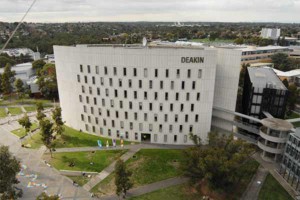 A huge number of foreign students from all over the world have taken advantage of studying at Australia’s renowned universities such as Australian National University (ANU) and Deakin University, both of which have a long history of bringing international students to the successful completion of bachelor’s, master’s and doctoral degrees.

Currently, there are thousands of foreign students enrolled at ANU owing to the university’s outstanding reputation in schools and faculties such as the College of Arts and Social Sciences, College of Business and Economics, and College of Law.

An internship program is another feature of these Australian universities. The program allows graduates to form networks and gain valuable hands on experience in their field.

Many of the courses have a built-in work component, which consolidates and provides relevance to the student’s learning experience while studying.

“Such experiential study experiences give us the opportunity to immediately apply skills and knowledge in the workplace, and enhance employment prospects,” Lina Kurniawati, an accounting major student from Deakin University, remarked.

Deakin University’s vice chancellor, Prof. Sally Walker, said that Deakin University was one of Australia’s fastest growing universities not only in terms of the internship program but also in research.

“The university has built an enviable international reputation for fostering outstanding research programs in areas relevant to the students’ future.

The university also focuses on current and emerging world issues at the forefront of innovative research,” Walker said.

By Aulia Rachmat Sungkar. Published in The Jakarta Post on May 2, 2010.