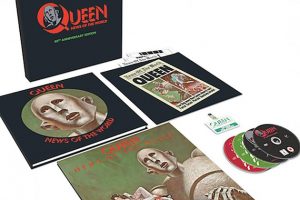 Not many bands can boast to have such a big influence on the modern music. Take, for examples, the Rolling Stones or Queen. Theirs are some of the most well-known tunes in the world, still getting healthy airplay the world over.

And Queen is the king (pun intended) when it comes to providing us with the some of the most remarkable basslines as in their songs “Under Pressure” and “Another One Bites the Dust”; one of the world’s most recognized intro to a song of any genre, “We Will Rock You”; and  the great anthem “We Are the Champions”. The last two are from the band’s sixth full-length album News of the World released in 1977.

Commemorating the album’s 40th anniversary is the release of News of the World special boxset. Set for a worldwide release date of November 17, the package is jampacked with so many offerings making it the ultimate release of the album.

The new package includes the original album on CD, plus two CDs of recently unearthed out-takes and rarities from the band’s archives, one of which is a newly created ‘alternative’ version of the whole album – Raw Sessions.

The third CD in the package, Bonus Tracks, features previously released but hard-to-find versions of News of the World tracks recorded in concert, for radio shows, or in alternate mixes. Another great inclusion is a pure analogue re-cut of the original vinyl LP, direct from the unmastered analogue master mix tapes, presented in a facsimile original sleeve. And related memorabilia include three posters and a 60-page book of images, mostly previously unseen.

The package is completed with a one-hour DVD documentary, Queen: The American Dream, created from backstage material filmed during Queen’s 1977 US News of the World tour.

This treasure trove is already available for pre-order at the band’s website,